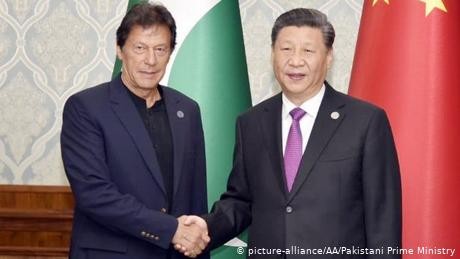 Pakistani Prime Minister Imran Khan arrived in Beijing on Tuesday to discuss the security situation in the Indian-administered Kashmir.

The premier was set to hold talks with Chinese officials, including President Xi Jinping and Prime Minister Li Keqiang on Tuesday.

"The visit will be instrumental in further cementing Pakistan's economic, investment and strategic ties with China," Khan's office said in a statement.

"The prime minister will exchange views ... the state of peace and security in South Asia arising from the situation in occupied Jammu and Kashmir," the statement added.

Kashmir has been in a state of lockdown since Indian Prime Minister Narendra Modi abrogated its special status on August 5.

India's moves have strained ties with Pakistan, which also claims sovereignty over the region.

Pakistan and India both rule part of the disputed Himalayan territory of Kashmir but claim it in full. The restive region is a flashpoint between the nuclear-armed archrivals. China, too, has some territorial claims in the area.

China is a close Pakistan ally, with Islamabad heavily dependent on Beijing's strategic and economic support.

Beijing is opposed to New Delhi's Kashmir move, especially its decision to carve the Ladakh region out of Jammu and Kashmir state and administer it federally. A Chinese government spokesperson called the move "unacceptable" and said that it would help Pakistan in defending "its legitimate rights and interests" in the Kashmir region.

Narayani Basu, a New Delhi-based author and foreign policy expert, believes that the Kashmir crisis won't have a huge impact on Sino-India relations. "China, at the moment, is dealing with a number of domestic and global issues, so it cannot solely focus on Kashmir," Basu told DW, referring to Beijing's woes in Hong Kong and Taiwan, as well as its ongoing trade conflict with the United States.

"There will be diplomatic posturing from both sides, but any major fallout is unlikely," Basu added.

This situation only makes things more difficult for Pakistan, which has so far not received the kind of Chinese backing over Kashmir that it has been looking for, say experts.

Pakistani authorities say they are satisfied with Beijing's support on the Kashmir issue.

Prime Minister Khan is also expected to discuss the $60 billion (€55 billion) China-Pakistan Economic Corridor (CPEC) with the authorities in Beijing.

CPEC is part of China's intercontinental Belt and Road Initiative (BRI), which envisions rebuilding the old Silk Road to connect China and Asia, Europe and beyond with massive infrastructure spending largely financed by China. Beijing also hopes BRI will help expand its clout over Pakistan and across Central and South Asia, as well as counter US influence in the region.

Some media reports say the CPEC projects have slowed since Prime Minister Khan came to power in Pakistan in August 2018.

Khan is likely to allay Chinese concerns over a perceived lack of progress on the initiative.

Khusro Bakhtiar, Pakistan's minister for development and planning, told a news conference on Sunday that there hadn't been any slowdown in CPEC projects.

"[There's] a narrative being built up that they have become slow; I reject it, it's totally wrong," he said.

Khan's visit comes just days before the Financial Action Task Force (FATF), a global money laundering watchdog, is due to decide whether Pakistan's efforts to clamp down on terror financing are sufficient for it to avoid being put on a "blacklist."

Khan is counting on China's support in the FATF Paris consultation that begins on October 13.