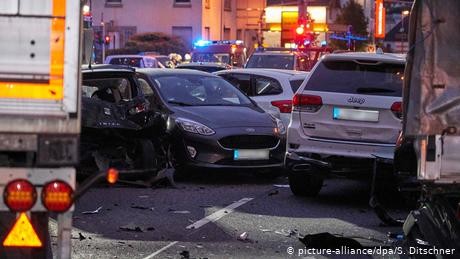 German authorities were investigating Tuesday why a man rammed a stolen truck into a line of cars in Limburg, leaving eight people injured.

When asked if it was a possible terror attack, Seehofer told reporters ahead of an EU meeting in Luxembourg: "I can't tell you at this point how this act is to be assessed."

Alexander Badle of the Frankfurt prosecutor's office told news agency DPA that authorities were investigating all angles, but that it was too soon to give any more information.

"Based on what we have learned and several witness accounts, the man seized control of the truck at about 5:20 p.m. (1520 GMT)," police said after the incident.

The articulated truck slammed into eight vehicles that were waiting at traffic lights near Limburg's main train station, in the German state of Hesse, "crushing them together."