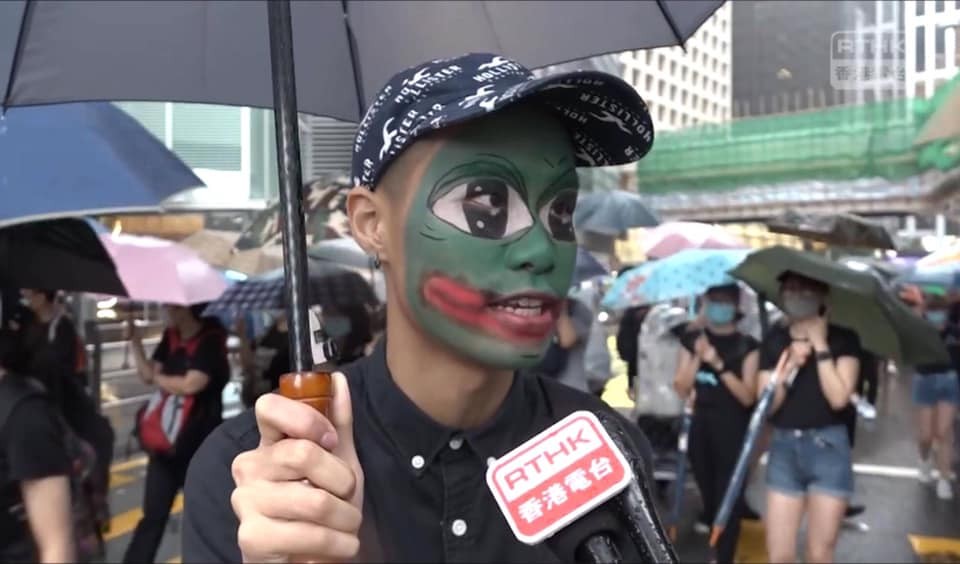 TAIPEI (Taiwan News) — This photo shows a Hong Kong protester countering the anti-mask law by painting his face to look like Pepe the Frog.

After the Hong Kong government imposed a British colonial-era mask law on Friday (Oct. 4), Hong Kong protesters have been expressing their opposition in innovative ways, such as by wearing Guy Fawkes masks, surgical masks with slogans, and plain white masks. On Monday, a Hong Kong man who had painted his face to look like Pepe the Frog was interviewed by RTHK.

Created by artist Matt Furie in 2005, Pepe the Frog was later co-opted by white nationalists and the alt-right movement during the U.S. presidential election in 2016 and has since been removed from certain websites and disowned by its creator as it has become a symbol of hate. However, the character has gained new life with young Hong Kong protesters as a symbol of defiance against the tyranny of Beijing and its hand-picked leader of Hong Kong, Carrie Lam (林鄭月娥).

The character first became popular in Hong Kong as a sticker on Whatsapp and anti-government memes that were derived from it. After a Hong Kong woman suffered a severe eye injury during one of the protests, many images of Pepe with a bloody eye surfaced.

When the protesters learned of Pepe's association with the alt-right movement, there was a heated online debate about whether to continue to use the character. The conclusion was that it had a different meaning in the Hong Kong context, and its notoriety in the West could help gain attention for their cause.