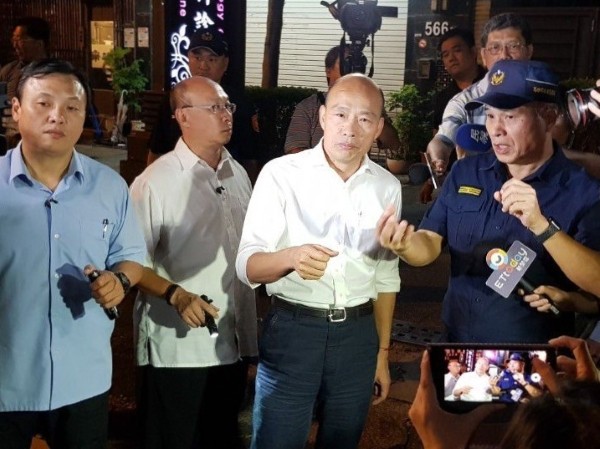 TAIPEI (Taiwan News) — During a police inspection of a shrimp fishing restaurant in Kaohsiung on Monday (Oct. 7), itinerant Kaohsiung mayor and Kuomintang (KMT) presidential candidate Han Kuo-yu (韓國瑜) was jeered by customers, who yelled at him leave them alone.

Touting Kaohsiung's efforts to "combat crime and purify public order," Han joined police in a spot inspection of a shrimp fishing restaurant in the city's Fengshan District on Monday. When he peeked into a KTV room in the restaurant, angry customers shouted for him to "go away!"

According to ETtoday, Han first went to the Fengshan Precinct station to be briefed by officers that evening. In an interview with media, Han stressed, "Without public order, there is nothing!"

Han then joined police on a surprise inspection of a shrimp fishing restaurant. Before he arrived, a large number of police officers had already set up a roadblock outside of the eatery, causing a major traffic jam.

When Han finally arrived at the shrimp fishing establishment, Fengshan Precinct Police Chief Lin I-yang (林依仰) led Han on an inspection of the restaurant. Unexpectedly, when Han and Lin entered a KTV room inside the establishment, the patrons singing inside became highly agitated by the interruption and shouted, "What are you doing? We just came here to sing! Go away, OK?"

Han, Lin, and the group of officers then awkwardly left the scene. According to local media reports, a total of six police stations dispatched 160 officers on unannounced inspections of various venues in the city that night.