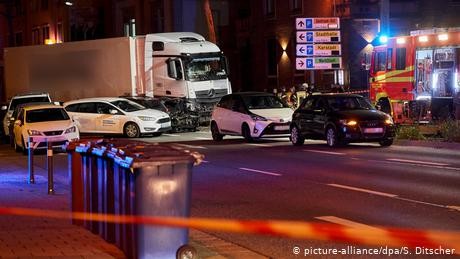 A man driving a stolen truck plowed into several cars in the center of the German city of Limburg on Monday, injuring 16 people, according to police.

The driver, who was also injured, has been arrested.

"Based on what we have learned and several witness accounts, the man seized control of the truck at about 5:20 pm (1520 GMT)," police said in a statement.

According to police, the articulated truck slammed into eight cars that were waiting at a traffic light near the main railway station of Limburg in Hesse state, "crushing them together".

Several people were being treated in hospital, one of them in a critical condition.

'Not ruling anything out'

A spokesperson for West Hesse police said they were looking into all motives behind the incident, but added: "We currently do not have sufficient information about what was behind it."

German news agency DPA said that when asked by a reporter if terrorism was a possible motive in the incident, police said: "We are not ruling anything out."

Regional police took to Twitter to urge the public to not speculate about a motive for the incident, saying "no-one needs trolling or wild speculation."

The police also confirmed that it was normal procedure for the police to arrest a driver in an incident that caused so many injuries. The investigation is ongoing.

Police deployed officers and a helicopter following the incident in the German city of 35,000 inhabitants.

In December 2016 a hijacked trucked rammed through a Christmas market in Berlin. The Islamist attack killed 12 people and injured more than 70 others.