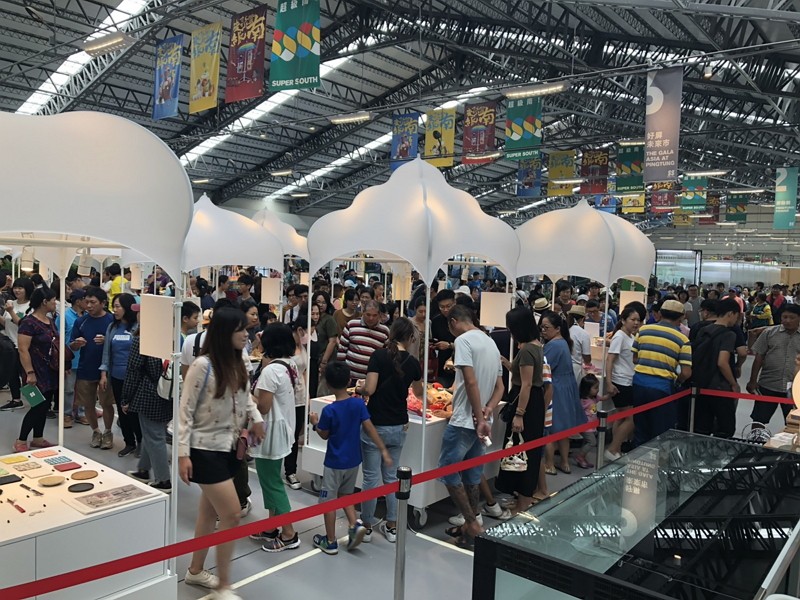 A total of 200,000 people attended the Taiwan Design Expo in Pingtung County on its opening day Saturday, the most ever on the first day of the annual design exhibition since its inception in 2003, event organizers said Sunday.

Long lines had formed by the time the expo venues were opened to the public at 1 p.m., according to a county government statement.

One of the most popular designations was the expo's main venue at Taisugar County Park, where its designers turned the 6,600 square-meter site into what looked like a giant supermarket, the statement said.

According to the venue's chief designer Joe Fang (方序中), the "Super South" supermarket design concept was geared to showcasing Pingtung's strength as one of Taiwan's agricultural strongholds whose products are distributed across the country, much as a supermarket chain sends Pingtung products to its stores around Taiwan.

Another highlight of the expo were six kinds of NT$150 (US$4.8) limited-edition boxed lunches featuring local fruits and vegetables, which sold very well, the county government said.

Organized by the Taiwan Design Center under the auspices of the Ministry of Economic Affairs and local governments, the annual Taiwan Design Expo has been staged in various locations across Taiwan since its founding in 2003 to promote creative design ideas with a local flavor.

The annual expo, which runs until Oct. 20, is being staged in the southernmost Pingtung County for the first time this year.

Aside from its main venue at Taisugar County Park, other satellite venues include the Pingtung County Tobacco Factory, a V.I.P. Zone, and the Pingtung Art Museum, the organizers said.