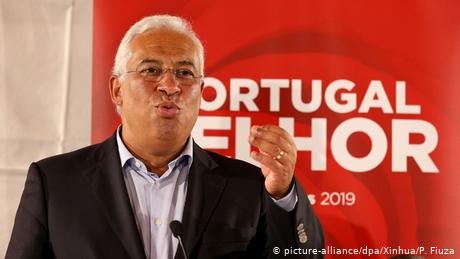 Prime Minister Antonio Costa's Socialists (PS) appeared set to come out on top of parliamentary elections held Sunday in Portugal. The first forecasts showed his party expanded its number of mandates in the 230-seat parliament but fell short of winning an outright majority, meaning Costa will need to build a coalition government.

"The main question is whether we'll have our hands tied," Costa said ahead of the poll at a campaign rally on Friday. "We need to have the strength to guarantee four years of stability and not be a short-term government." A regular government term lasts four years.

First forecasts published b public broadcaster RTP put the Socialists in the overall range between 35% and 39% of the vote, which would give them more seats than in the last election in 2015 in a boost coming after four years of solid economic growth.

The main opposition center-right Social Democrats (PSD) were estimated to have scored between 27% and 31%.

Although the projected results would likely see PS's seats in parliament from 86 to 112, a party needs 116 to rule independently. This means Costa, a former mayor of Lisbon, will need to seek an alliance with another party. The incumbent PM said before the election, however, that he had not agreed to a coalition with any other party before the election.

Over the previous legislative period, PS had been supported by the Marxist Left Bloc (BE) and the Green-Communist alliance, without a formal coalition agreement.

Since accepting a bailout in 2011 following ramifications from the global financial crisis, Portugal has been back on its feet since 2014, with a tourism boom helping unemployment to reach its lowest levels since 2002.