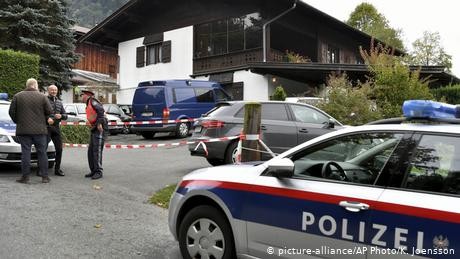 Five people in the Tyrolean ski resort of Kitzbühel were shot dead overnight to Sunday, with Austrian police saying they had detained a suspect.

The Austrian news agency APA reported that a 25-year-old man had admitted to killing his ex-girlfriend, her two parents, her brother and her new boyfriend. According to the Kurier newspaper, the man and the 19-year-old woman had ended a relationship two months ago.

The paper said the killings occurred after the man had met his ex-girlfriend and her new partner and become involved in an argument with them. He is alleged to have later shown up twice at her family home early on Sunday morning, the second time with a pistol belonging to his brother, which he used for the killings.

The 25-year-old man turned himself in to police. "I have just murdered five people," he said as he approached the officers, police said.

"We are all shocked and deeply saddened," Kitzbuehel's mayor Klaus Winkler told the dpa news agency.

Kitzbühel is located east of Innsbruck, the state capital of Tyrol, and is known for attracting wealthy ski fans from both Austria and abroad during its ski season from mid-October to early May.