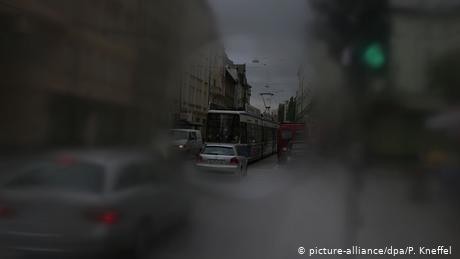 Juli was seven years old when she was diagnosed with retinitis pigmentosa, a genetic disorder that gradually leads to loss of vision. For years, she lived a relatively normal life despite the onset of symptoms — loss of peripheral vision, tunnel vision and blurring of sight.

She went to school, got around her hometown Budapest, took strolls in the park and pursued her passion for drawing and painting. Then, while in university studying religion and training to be an elementary school teacher her life went virtually dark.

It was a bitter time marked by depression for the then 23-year-old, who had ambitions to teach children and illustrate children's books.

"I lost dreams I couldn't fulfill," Juli said. "When you lose something you go through steps of denial, anger, bargaining, depression and finally acceptance," she explained, outlining the five stages of grief.

Her life had been turned upside-down and she went to a blind rehabilitation center to help with the adjustment. She had to learn how do everything anew, from cooking to walking to using special computers and technology for the blind.

Now she keeps her spices in alphabetical order to find them, though she admits sometimes making mistakes and "getting some interesting recipes." She enjoys listening to audio books and even runs in the park, with her husband leading her with a rope.

To live blind requires laser-like focus and awareness of surrounding sounds, especially while in the potentially dangerous world outside. Juli describes the most difficult part of being blind as all the "hard brain work" that goes into everything she does.

Indeed, I was about to learn.

Seeing with other senses

Now 33 years old, Juli is a guide at the Invisible Exhibition in the Hungarian capital. At the interactive experience visitors learn about the blind and are brought through five pitch black rooms — an apartment, a noisy street crossing leading to a vegetable stall, hunting lodge, forest complete with chirping birds, and sculpture museum. There is also an option to eat an Italian dinner, served by Juli, in the dark.

At first, the experience comes across as a fun game, but after a while excitement vanishes and a somber reality sets in. This is the daily, hard life for the estimated 36 million blind in the world.

I may fumble around a fake apartment and laugh, but the blind need to manage with sharp objects and cooking in everyday life. Someone may not listen to the clicking noise signaling it is safe to cross the street in a staged environment, but in real life such a mistake can be fatal. And the forest and museum sculptures just aren't the same when one can only touch and not see.

Eventually, Juli brought my wife and I and four others into the dinner room. One-by-one, she kindly guided us to our seats at the table. Drinks and three courses were served: I had tomato soup, a messy spaghetti Bolognese and tiramisu.

Normally, I would devour such a meal. But strangely, in the darkest of darks I had lost my appetite. Food is not the same when you can't see it and are forced to eat slowly. My soup seemed like an endless bowl, the spaghetti neverending and the tiramisu tiring to finish.

After nearly three hours in the pitch black, I became mentally exhausted and experienced a strange tiredness and boredom setting in. It's what Juli meant by "hard brain work."

Finally, it was time to leave and see again. Everyone was excited to enter the light, which pierced through our dilated pupils and caused a strange dizziness. Juli looked at us with a kind smile, standing there in contemplation.

It was a sad sight to know Juli didn't have the luxury to experience again what everyone takes for granted.

"My heart is broken for her not being able to escape the dark cage that this life has put her in,"my wife later commented. "She can never see herself in the mirror again to know how beautiful she is."

Invisible Exhibitions are open in Budapest, Prague and Warsaw.