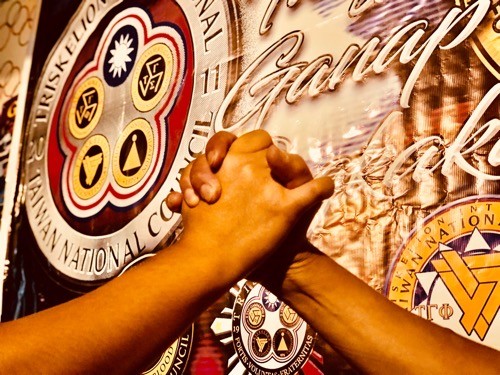 Hundreds of Filipinos from one of the Philippines' largest fraternities gathered in Taichung on Sunday to celebrate the organization's 51st anniversary with rap music, hip hop dance, and traditional food.

Tau Gamma Phi, otherwise known as the Triskelions' Grand Fraternity, was founded Oct. 4, 1968 by students from the University of the Philippines' Diliman campus in Quezon City.

It has since spread internationally with members in Filipino communities around the globe, and about 250 people showed up at Sunday's gathering.

Fidel A. Macauyag, labor attaché and director of the Philippine Overseas Labor Office in Taichung, spoke at the celebration and commended the organization for its support of its members.

"If an individual member of the group has an issue or concern, then he or she can elevate it to the group where he or she can be represented," he told CNA. "The organization can also work together to help solve the problem of the individual."

Just as valuable, he said, is for Filipinos to have people with whom they share a common bond when they come to Taiwan to work.

Once the speeches were done, Filipino workers in Taiwan put on a show of hip hop dances and a rap presentation, and team-building games were held to further strengthen the friendship of the fraternity's members.

"We all come from different provinces in the Philippines, and it's because of this fraternity that we are united and guided to become better people," said Peter Ang, 64, who grew up in the

Philippines and joined the fraternity in 1977 at the University of the East in Manila.

Marvin Rodil, national council chairman of the Triskelion International Taiwan National Council, said the fraternity is about unity and brotherhood as well as serving the communities where it is represented.

One of the fraternity's members, Paolo Escurdero, told CNA the group is currently planning a blood donation day to fulfill that mission.