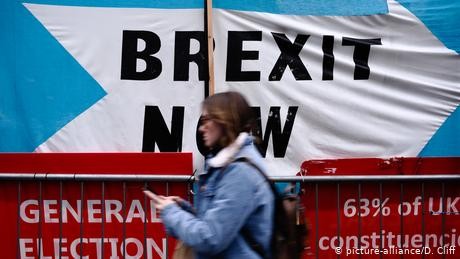 Top EU leaders are set to discuss Brexit at a summit scheduled for October 17 to 18, with the current Brexit deadline set to expire by the end of the month.

Speaking to German weekly Welt am Sonntag, however, Finnish Prime Minister Antii Rinne said he expected the UK to ask for another deadline extension.

"It currently seems like there would not be a deal by the end of October and there is a danger of hard Brexit," he said, according to the report.

'Dead in a ditch'

Earlier this week, British Prime Minister Boris Johnson sent out a proposal to bypass the backstop between the Republic of Ireland and the UK. In the letter to EU leaders, Johnson suggested "the potential creation of an all-island regulatory zone on the island of Ireland, covering all goods." The letter provided few practical details, except to say most of the trade would be controlled "electronically" with only a "very small number of physical checks."

EU leaders rejected the plan. Rinne, whose country holds the six-month rotating presidency of the bloc, told Johnson it was "important to find a solution within a week."

Previously, Johnson said he would rather be "dead in a ditch" than ask for another Brexit extension from the EU. The bloc has granted two extensions already.

In the article published on Sunday, Rinne noted that Johnson still had two weeks to come up with other ideas.

"But it would seem that Johnson has only now understood what a big mess this is, and he has difficulty making a proposal that would get him out," Rinne said in translated remarks.

"That is why I fear that the October summit would be more about an extension than a concrete solution for this situation."

Rinne also said it was important to prevent a hard Brexit."I would be ready to consider a negotiation extension request," Rinne added.

On Saturday, Irish Prime Minister Leo Varadkar said he was seeking a meeting with Johnson this week and warned that time was "tight."

With the summit looming it was "not reasonable to expect 27 or 28 heads of government to decide and sign off on something they only see the night before or two days before," Varadkar said.

Talks between the UK's top Brexit representative, David Frost, and EU negotiator Michel Barnier were halted on Friday with no progress, despite the UK's efforts to keep going throughout the weekend. The negotiators are set to meet again on Monday.