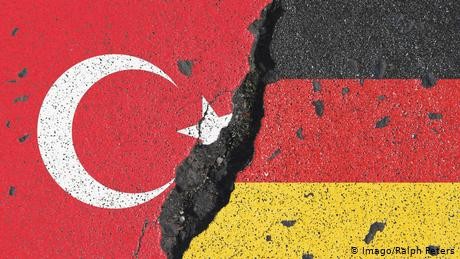 The five are accused of membership in an illegal organization and spreading propaganda, pro-Kurdish Mezopotamya news agency reported late on Friday, without naming a group of their alleged membership.

Since a failed coup in 2016, several Germans have been targeted in Turkey over alleged terror ties, mainly to the banned Kurdistan Workers' Party (PKK).

The PKK is considered to be a terror group by Ankara, the United States and the European Union.

Read more: Can the EU-Turkey deal be fixed?

Speaking to the French news agency AFP, the German Interior Ministry denied claims that information leading to the detention of the five had been handed over to Turkish authorities during Interior Minister Horst Seehofer's visit to Ankara this week.

However, a ministry spokesman would not rule out that such information could have been exchanged "as part of the routine cooperation between our security services."

A series of arrests of Germans in 2017, including the detention of journalists and activists, fueled a diplomatic spat between Berlin and Ankara.

Many of those arrested were allowed to leave Turkey while court cases against them continue in their absence.

Turkish Interior Minister Suleyman Soylu in March this year threatened to detain individuals who came to Turkey if they were involved with the PKK and other groups.

"We have now taken measures against those who take part in the terror organization's meetings in Europe, Germany and then come to Antalya, Bodrum, Mugla for a holiday,” Soylu said. "Let them enter the airports. They will be detained.”