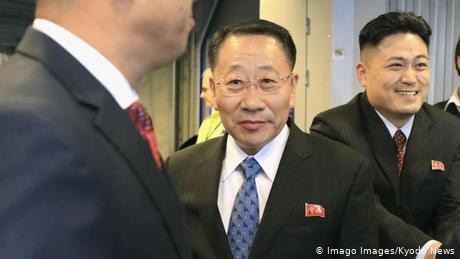 US and North Korean diplomats were set to resume working-level nuclear talks in Stockholm on Saturday after months of uncertainty over the fate of the negotiations.

North Korea's Kim Myong Gil and Stephen Biegun, the special envoy of US President Donald Trump, are part of the teams holding the talks at an island off the Swedish capital. The first cars with tinted windows started arriving just after 9.00 a.m. (0700 UTC).

Read more: What does North Korea want to achieve with missile tests?

Kim Myong Gil said he was "optimistic" about the talks, speaking in Beijing on his way to Stockholm.

The talks will be the first significant dialogue between the US and North Korea since the February summit in Hanoi between President Donald Trump and North Korean leader Kim Jong Un. Trump then walked away from Kim's offer to close a nuclear site if the US lifted sanctions.

Washington has since been awaiting a resumption of the dialogue.

The talks come after North Korea recently announced the test of a "new type" of submarine-launched ballistic missile (SLBM).

North Korea frequently couples diplomatic overtures with military moves as a way of maintaining pressure on negotiating partners, analysts say, and many believe this weapons system gives it added leverage.

According to analysts at 38 North, a North Korea think tank in Washington, the Pukguksong-3 missile flew 950 kilometers (590 miles) in the air and landed around 450 kilometers from its launch site.

Analysts said if the missile had been launched on a normal trajectory, it would have been capable of covering nearly 2,000 kilometers, making it the longest-range solid-fuel missile North Korea has ever tested.

The Pentagon said the missile seems to have been launched from a "sea-based platform" and not a submarine.

Although missiles launched from North Korea's sea-based platforms would be harder to detect, and would extend the range of Pyongyang's threat, experts say it will be years before these types of weapons are developed to the point of strategic deployment.

Despite international condemnation of North Korea's repeated weapons tests, Trump has so far refrained from criticizing Pyongyang, while insisting his personal ties with the North's leader remain good.

The US president, who has invested a lot of political capital in getting denuclearization negotiations back on track, has spoken about "tremendous progress" with the Kim regime.

The United Nations Security Council, meanwhile, is expected to hold closed-door talks early next week on the latest test, diplomats said. The talks were requested by Britain, France and Germany, as the European powers push for the world body to keep up pressure on Pyongyang which is under heavy US and UN sanctions over its weapons program.