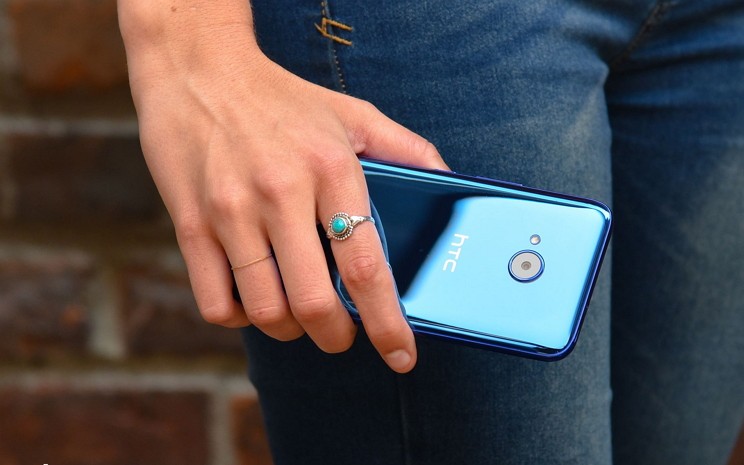 HTC Corp., a Taiwan-based smartphone brand, which has entered the global virtual reality business, reported the first year-on-year increase in sales for September in more than two years.

In a statement, HTC said it posted NT$1.275 billion (US$41.13 million) in consolidated sales for September, up 1.53 percent from a year earlier.

The last time HTC reported a year-on-year revenue increase was June 2017, when the smartphone vendor generated NT$6.89 billion in sales, up 8.38 percent from a year earlier.

It was a positive lead for HTC, which has been seeing escalating competition in the global smartphone market not only in the high-end segment but also on the low price end.

Market analysts said HTC has benefited from its efforts to develop VR headsets in a bid to offset the impact from stiff competition in the smartphone market, while the launch of the company's new handset models also boosted its September sales.

HTC entered the VR market by unveiling the first VR headset, the HTC Vive, in 2015, followed by subsequent models.

The September sales increase was the first time HTC reported sales above the NT$1 billion level since June, when the figure stood at NT$1.46 billion.

But strong competition in the global smartphone market still squeezed HTC's sales for the first nine months of this year, when its revenue fell 58.17 percent from a year earlier to NT$8.2 billion.

Looking ahead, HTC said since its latest VR headset model -- the Vive Cosmos -- went on global sale on Oct. 3, it expected the new gadget will serve as a driver to its sales growth in the near future, in particular in the upcoming year-end shopping season in the U.S. and European markets.

HTC introduced the PC-based Vive Cosmos in the Consumer Electronics Show (CES), one of the largest consumer electronics exhibitions in the world, in Las Vegas in January.

HTC continued its efforts in smartphone development with a focus on the Blockhain technology, which was originally devised for transactions of the digital currency Bitcoin and has been seen as the backbone of a new type of internet in which information held on a Blockchain exists as a shared database.

To strengthen its capability in the Blockchain technology development, HTC has partnered with Bitcoin.com, and HTC's first Blockchain phone -- Exdous 1 -- has become the first phone to provide users Bitcoin Cash (BCH) support without first downloading a BCH wallet from an app store.

In September, HTC appointed Yves Maitre, a telecom business veteran, as chief executive officer to replace Cher Wang (王雪紅). Wang continued to serve as the chairperson of the company to keep focusing on future technologies and laying down strategies for corporate development, which is expected to help the company expand its product portfolio and its vision for Vive Reality.

In the second quarter of this year, HTC incurred a loss of NT$2.71 per share, marking the fifth straight quarter of a net loss, but its second quarter gross margin -- the difference between revenue and cost of goods sold -- rose 5.6 percentage points from a quarter earlier to 20.3 percent, the sixth consecutive quarter of a sequential rise.