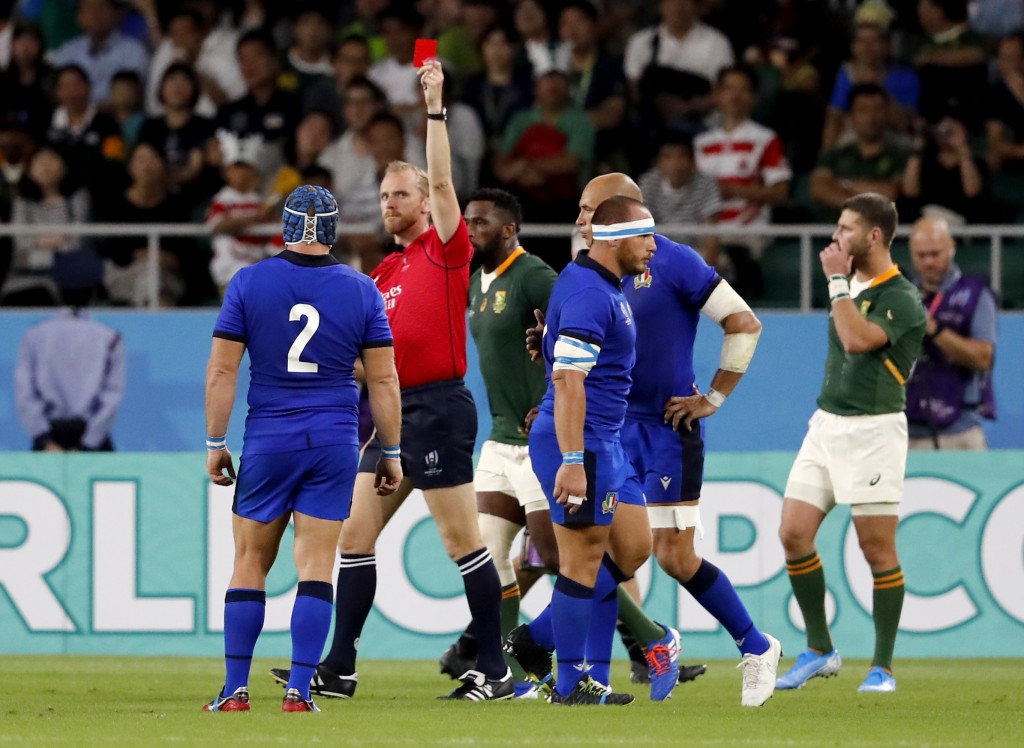 Italy woke up on Saturday in Shizuoka and the bitter taste of a wasted opportunity and regret lingered.

The night before in Shizuoka Stadium, the Italians came out after halftime trailing South Africa but still feeling they could win their Rugby World Cup pool match.

They were threatening the Springboks' tryline until Andrea Lovotti, aided by fellow prop Nicola Quaglio, picked up South Africa No. 8 Duane Vermuelen by the legs and speared him into the ground head first. Lovotti became the first Italian to be sent off in a Rugby World Cup, and a 14-man Italy's confidence collapsed. They lost 49-3.

Coach Conor O'Shea was livid, calling the tackle "crass stupidity," adding he was "destroyed for everybody because we worked so hard."

Lock David Sisi, who was replaced soon after the incident, said their hotel on Saturday morning was very quiet.

"We built towards that goal last night and we talk about moments in sport and, unfortunately, we lost that moment and it has hit us pretty hard," Sisi said.

The Italians were rallying around Lovotti who, along with Quaglio, was cited for the tackle. Both face a disciplinary hearing on Sunday in Tokyo.

"Lovo has won 30-40 caps for Italy and is an absolute servant for Zebre," Sisi said of his clubmate. "He is a hugely experienced player and he doesn't need anyone to tell him it was a mistake last night.

"We will wear it as a squad. It affects everyone. We are a very united squad and Lovo off the field is a top bloke and a top player on the field.

"I don't think I've seen a swing like it in my entire playing career. A chance to go within seven points, and then to be playing with 14 men.

"There were moments of that game when we earned our own momentum and that is what is saddest about it. A lot of hard work went in before that match and we were only five meters away from their line, and it would have been a one-score game and the pressure would have gone back onto South Africa."

Sisi said Italy can't afford to mope. They have one more pool match left, against defending champion New Zealand next Saturday in Toyota. The Italians have never beaten the All Blacks.

"Our performance is going to be everything for us now," Sisi said. "I've watched the (South Africa) match back twice and we did some good things.

"Going against the No. 1 team is an even bigger challenge. To put in a performance that everyone back home is proud of is our No. 1 goal."