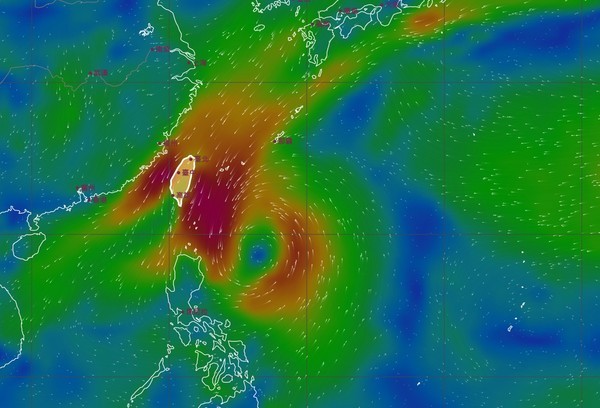 TAIPEI (Taiwan News) – A tropical disturbance that has formed in the Western Pacific could intensify next week into Typhoon Hagibis (哈吉貝), the 19th tropical storm of the year, possibly putting a damper on the National Day holiday, depending on the strength of a Pacific high-pressure ridge.

Meteorologist Daniel Wu (吳德榮) said that a tropical disturbance in the Western Pacific could develop into a typhoon next week. However, Wu added the typhoon will probably head toward Japan's Ryukyu Islands.

Wu said the typhoon's periphery will likely not affect Taiwan on the first two days of the Double Ten Day holiday (Oct. 10 and 11). However, by Oct. 12 and 13, He said that Taiwan could see heavy rain from the storm's periphery, though more observation is needed to accurately predict its future path.

Central Weather Bureau (CWB) forecaster Chen Yi-hsiu (陳伊秀) said that if Hagibis forms, the typhoon will follow a similar path to Typhoon Mitag. Chen predicts that Hagibis will head to the waters off the coast of northeastern Taiwan before shifting north and moving toward Japan and the Koreas.

Chen said that Hagibis' proximity to Taiwan will ultimately depend on a Pacific high-pressure ridge. He added that more detailed information will not be available until after a tropical cyclone takes shape.

As for the weather today (Oct. 5), Chen said that as a northeasterly wind intensifies, scattered showers could be seen on the northern coast of Keelung, northeastern greater Taipei, and eastern Taiwan. There is a probability of heavier rain in northeastern Taiwan, according to Chen.

Lows in Taiwan this morning and evening will range between 23 and 26 degrees Celsius, while highs in northern and eastern Taiwan will reach 30 to 31 degrees. Central and southern Taiwan will feel muggy with a high of around 33 degrees.

Wu said that as a low-pressure area passes through Luzon in the northern Philippines today and Sunday, clouds will increase, bringing brief rain showers. Over the weekend, winds in northeast Taiwan will strengthen, and Taoyuan and areas north will see increasing clouds and a drop in temperature.