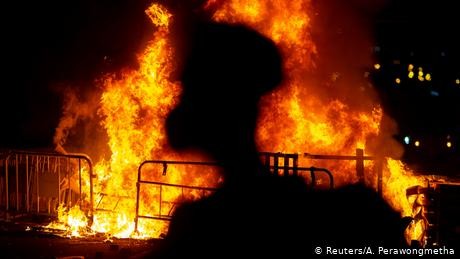 Hong Kong's mass transit rail system has been suspended after a night of violent unrest, with protesters wearing face masks in defiance of a ban newly introduced by the government.

Chief Executive Carrie Lam said she invoked the new restriction under the Emergency Regulations Ordinances, a colonial-era plan that allows her to circumvent the law and legislature and enforce any regulations during a time of emergency or public danger.

The ban applies to all public areas where protesters might gather. The prohibition means the wearing of full or partial face coverings, including face paint, at public gatherings is punishable by one year in jail.

"The government doesn't listen to us. So we are upping our game," 32-year-old protester Nathalie told the Agence France-Presse as demonstrators began to trash the MTR transit station in the previously calm neighborhood of Tseung Kwan O.

In the northern district of Yuen Long, a police officer opened fire when he was surrounded in his car and attacked by locals. A petrol bomb exploded at the officer's feet.

"A large group of rioters attacked a plainclothes police officer in Yuen Long district. The police officer fell onto the ground and was beaten up by the group. Facing serious threat to his life, he fired one shot in self-defense," police said in a statement.

The territory's entire subway network was suspended on Friday night. By Saturday morning, train services were also closed, including the airport line, with the rail operator saying it would analyze the damage caused to stations before deciding when to reopen.