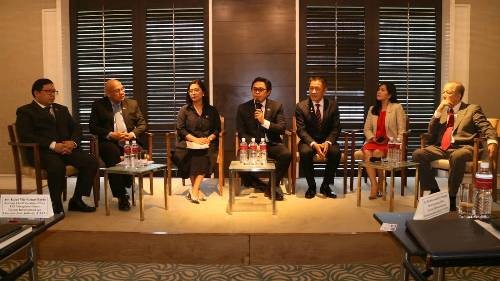 The two-day Philippine Tourism Investment Forum concluded Friday in Taipei, with the neighboring country eager to increase investments from Taiwan in its tourism sector as the overall Taiwanese investment amount has fallen there as well as overall in the countries covered by the New Southbound Policy.

Taiwanese investment amounts in the Philippines peaked in 2015, reaching a total of US$644 million, but have fallen to US$149 million last year, even though the number of investment cases have increased by five times.

That's despite the number of investment cases more than doubling.

Officials at the forum nonetheless touted the investment opportunities in the Philippines' tourism and tourism infrastructure sector to some 120 Taiwanese conglomerates and business leaders, the first time it was holding such a meeting in Taiwan.

The forum was organized by Manila Economic and Cultural Office (MECO) in Taipei to promote Taiwanese investment, development and partnership opportunities in the Philippine tourism, hospitality and entertainment sector and to boost Taiwan's presence in this industry, MECO said in a press statement.

MECO Chairman Angelito Banayo highlighted the numerous opportunities that are being offered for the first time to potential investors in Taipei by the Philippine Tourism Infrastructure and Enterprise Zone Authority (TIEZA), a government agency tasked with developing and promoting tourism projects, the MECO said.

These incentives include income tax holidays of up to six years, five percent preferential taxes on gross income, and tax exemptions on the importation of capital and transportation equipment up to 2029, among others, according to MECO.

It pointed out that the Philippines is Taiwan's closest New Southbound Policy partner. It received the highest growth rate for outbound tourists from Taiwan at 55.42 percent for the month of June and 30.6 percent from January to June compared to the same period in 2018, citing Taiwan's government data.

The forum also invited Simon Su (蘇國芳), Chairman and CEO of the Taiwanese MSK Group, which began investing in what is expected to be a US$2 billion project to develop a luxury resort complex in Subic Bay in 2017, to share the company's experiences in the Philippines.

Officials hope that would entice more Taiwanese investors to invest in the Philippine tourism sector.

The drop in the amount of money Taiwanese companies invested in the Philippines and in New Southbound Policy countries as a whole also fell last year compared to 2017, by 33.6 percent and 28.9 percent respectively, even as the number of investment cases increased significantly, according to statistics from the Investment Commission.