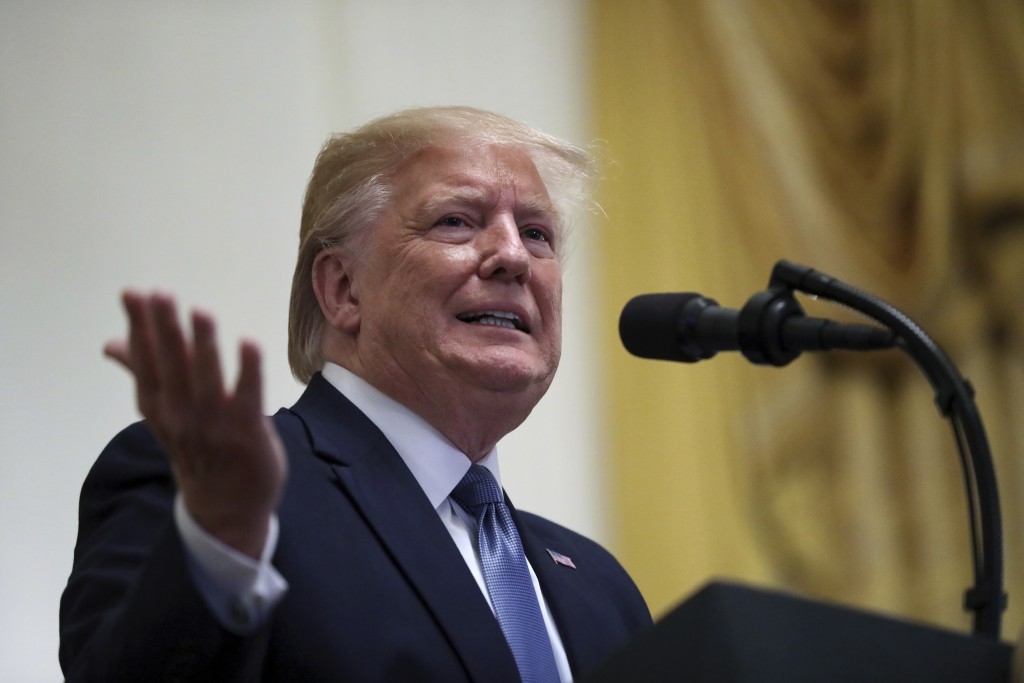 CHICAGO (AP) — A deep state coup. Or maybe a scheme coordinated by a Democratic congressman. Perhaps a hoax perpetrated by the pharmaceutical industry.

Those are some of the theories President Donald Trump and some GOP leaders have used to discredit a CIA whistleblower's complaint now at the center of a House impeachment inquiry.

That complaint details how the president asked Ukrainian President Volodymyr Zelenskiy to investigate Democratic political rival Joe Biden and his son Hunter, while his administration delayed military aid to the country.

The president's claims lack evidence. But that has not deterred some of his supporters from joining him in casting doubt or inventing far-fetched theories about the whistleblower complaint in new videos, articles and social media posts.

Here's a look at some of the specific allegations that have been made.

Trump and his allies maintain the complaint is part of a secret, coordinated effort to remove him from office. Such assertions echo Trump's theories on the 2016 presidential campaign trail that a "rigged" election would keep him from being voted into the Oval Office.

"This is looking more & more like a deep state scheme," House Republican Whip Steve Scalise, R-Louisiana, tweeted Wednesday, referring to a common conspiracy theory that there is an underground government network.

"It's nothing short of a coup, and it must be stopped," a narrator says.

Comments from Trump and his supporters casting doubt on the whistleblower's complaint contradict what's been said by acting Director of National Intelligence Joseph Maguire. The Trump appointee has testified to Congress that he believes the whistleblower and inspector general who handled the complaint "have done everything by the book."

The inaccurate assertion was first made last week in online articles written by conservative news outlets that were shared by hundreds of thousands of social media users. On Saturday, House Minority Leader Kevin McCarthy shared the theory.

"Whistleblowers were required to provide direct, first-hand knowledge of allegations...but just days before the Ukraine whistleblower came forward, the IC (Intelligence Community) secretly removed the requirement from the complaint form," McCarthy alleged in a tweet.

Similar suggestions were repeated by Sen. Lindsey Graham and White House adviser Stephen Miller in television interviews the next day. Trump then asked Monday, "who changed the long standing whistleblower rules," in a tweet.

In response to these claims, the U.S. intelligence community's inspector general said this week the rules around whistleblowers had not changed, and noted that nothing under the law requires complainants to have first-hand information of wrongdoing. The IG's office also said it had determined that the whistleblower did have some first-hand knowledge of certain alleged conduct.

By Wednesday, Trump alleged that House Intelligence Chairman Rep. Adam Schiff, D-Calif., had schemed with the whistleblower to lodge the complaint.

Within minutes of one another, McCarthy and Scalise also sent out widely shared tweets alleging Schiff had shaped the whistleblower's complaint.

The whistleblower did speak to staffers on the House Intelligence committee before filing the formal complaint that would trigger the impeachment inquiry. A spokesman for Schiff said committee staff advised the person to contact an inspector general and to seek counsel, but that the committee had not received an early look at the complaint.

The whistleblower's lawyers said the person had never met or spoken with Schiff about the matter.

The whistleblower appears to have properly sought help on filing the complaint, confirmed Michael German a former FBI agent and whistleblower who recently wrote about his experiences in a book called "Disrupt, Discredit and Divide."

"Certainly, it's OK to get guidance — and that's what appears to have happened here," German said.

On Thursday, Trump offered yet another explanation for what he's described as the "hoax" whistleblower complaint, again without offering any evidence. Referring to the impeachment inquiry, he said:

He did not elaborate.