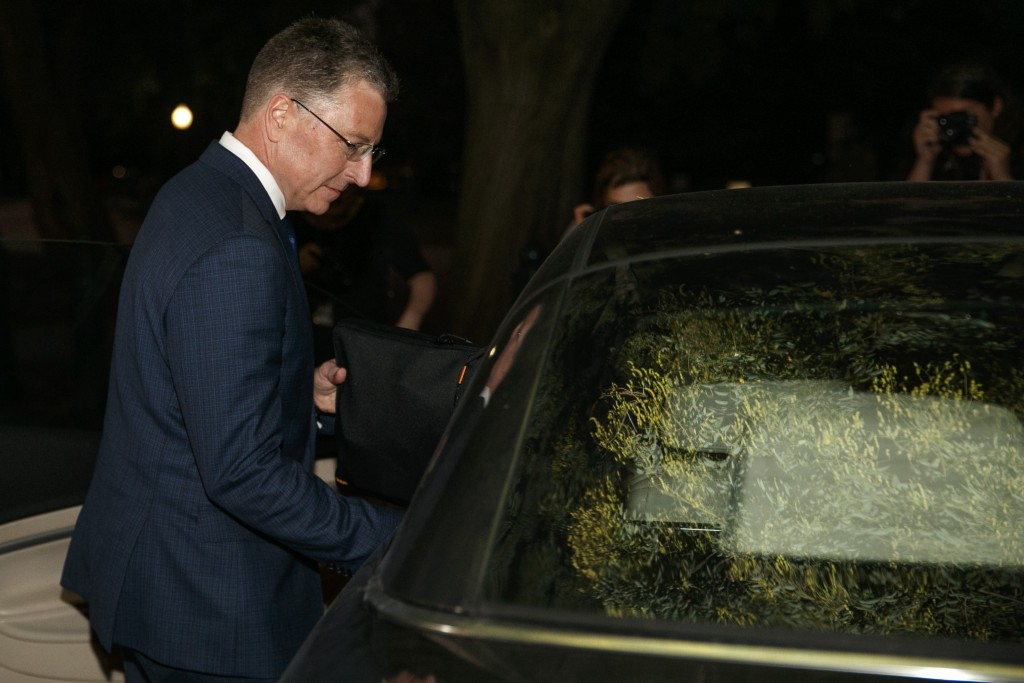 WASHINGTON (AP) — A whistleblower complaint about President Donald Trump's contacts with Ukraine had not yet been made public. An impeachment inquiry by Democrats had yet to begin.

But the saga at the center of it all was quietly unfolding in Washington, where two top diplomats catered to the president's interests in a foreign investigation into a political rival.

Text messages released by House Democrats span a frenetic eight-week period from July to September, revealing new details about State Department efforts to commit Ukraine to an investigation into the 2016 presidential election and the family of Democratic rival Joe Biden.

Taken together, the communications tell a story of diplomats striving to satisfy a president's unorthodox foreign policy whims even while another conveys misgivings about the whole plan.

Some takeaways on the texts:

"SPECIAL ATTENTION SHOULD BE PAID"

Much of the communication involves Kurt Volker, who resigned last week as special envoy to Ukraine, and Gordon Sondland, the U.S. ambassador to the European Union.

The texts show they were aware of the president's interest in having Ukraine investigate Burisma, a gas company where Biden's son, Hunter, served on the board even before Trump made the request of President Volodymyr Zelenskiy during a July 25 phone call.

A week before the call, Sondland spoke directly with Zelenskiy. Volker, meanwhile, had breakfast with Trump attorney Rudy Giuliani to tee up a future conversation between the former New York City mayor and one of Zelenskiy's advisers.

"Most impt is for Zelensky to say that he will help investigation — and address any specific personnel issues — if there are any," Volker wrote.

In the following days and weeks, the diplomats brainstormed language about a statement they expected Ukraine to give committing to undertake the investigations sought by the Trump administration.

Volker, in a text to Sondland outlining language Ukraine could use, wrote that "special attention should be paid to the problem of interference in the political processes of the United States especially with the alleged involvement of some Ukrainian politicians.

"We intend to initiate and complete a transparent and unbiased investigation of all available facts and episodes, including those involving Burisma and the 2016 U.S. elections, which in turn will prevent the recurrence of this problem in the future.

Trump has repeatedly denied any sort of quid-pro-quo with Ukraine. Sondland denied it as well in one of the texts.

Both maintained the innocuous goal was cleaning up corruption in a scandal-plagued country known for it.

Yet the texts betray a singular focus on a particular company — and, by extension, on Biden too. They also blur the line between Trump's interest in preventing future corruption with resolving vague grievances over the prior presidential election.

The texts also veer into the broad contours of a quid-pro-quo in which the announcement of a Ukraine investigation would secure a sought-after White House visit.

On the morning of the call between Trump and Zelenskiy, Volker told Andrey Yermak, a top adviser to Zelenskiy: "Heard from White House __ assuming President Z convinces trump he will investigate / "get to the bottom" of what happened in 2016, we will nail down date for visit to Washington."

Yermak, in turn, appeared reluctant to commit to the investigation without securing a date for a White House visit. "Once we have a date," he wrote on August 10, "will call for a press briefing, announcing upcoming visit and outlining vision for the reboot of US-UKRAINE relationship, including among other things Burisma and election meddling in investigations."

GIULIANI IN THE MIDDLE

The texts underscore the pivotal role played by Giuliani as an intermediary between the State Department and Ukraine.

On July 19, Volker texted Giuliani to connect him with Yermak and to propose a telephone call.

Giuliani stayed in the mix over the following days and weeks, meeting with Yermak and proposing a telephone conversation between Trump and Zelenskiy.

As Volker and Sondland debated the contours of the public statement they wanted Ukraine to make, they consulted with Giuliani.

"Can we all get on the phone to make sure I advise Z correctly as to what he should be saying? Want to make sure we get this done right. Thanks!"

In text after text, a lone American diplomat lays bare his queasiness about the dialogue.

William "Bill" Taylor, the charge d'affaires at the U.S. embassy in Ukraine, raises repeated flags, starting with a July 21 word of caution to Sondland that Zelenskiy "is sensitive about Ukraine being taken seriously, not merely as an instrument in Washington, domestic reelection politics."

He expresses unease again on September 1 amid discussion about the requirements for a White House meeting with Ukraine: "Are we now saying that security assistance and WH meeting are conditioned on investigations?"

A week later, as discussions continues about security aid for Ukraine and a possible public statement, Taylor puts his concerns in stark terms: "The nightmare is they give the interview and don't get the security assistance. The Russians love it. (And I quit.)

"I THINK IT'S CRAZY"

By the following day, the discussions disintegrated into disagreement, with diplomats bickering over Trump's intention and the strategy.

Taylor warned about the message that would be sent to Ukraine, and also Russia, by withholding military aid. "With the hold, we have already shaken their faith in us. Thus my nightmare scenario."

He followed up with: "As I said on the phone, I think it's crazy to withhold security assistance for help with a political campaign."

Sondland replied with an expansive defense of the plan, and of the president, in a response that cut to the heart of the issue now roiling Washington: "Bill, I believe you are incorrect about President Trump's intentions. The president has been crystal clear no quid pro quo's of any kind. The President is trying to evaluate whether Ukraine is truly going to adopt the transparency and reforms that President Zelensky promised during his campaign.

"I suggest," he added, "we stop the back and forth by text."