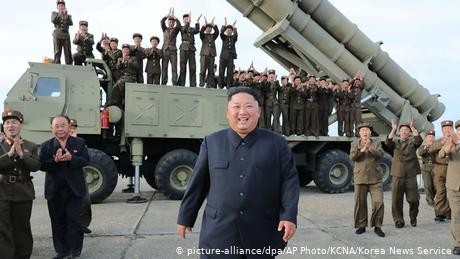 Since July, North Korea's missile testshave followed a similar pattern. Usually in the morning, reports from the South Korean or Japanese military come out describing "projectiles" fired from somewhere in North Korea and flying several hundred kilometers into the sea.

Although US President Donald Trump has dismissed these short-range launches as not violating any agreements banning Intercontinental Ballistic Missiles (ICBMs) or nuclear weapons, analysis shows each test is allowing North Korea to advance its weapons capability.

After South Korea and Japan both confirmed and condemned Wednesday's launch, North Korea announced that the test was a "new type" of submarine-launched ballistic missile(SLBM).

According to analysts at 38 North, a North Korea think tank in Washington, the Pukguksong-3 missile flew 950 kilometers in the air and landed around 450 kilometers from its launch site.

Analysts said if the missile had been launched on a normal trajectory, it would have been capable of covering nearly 2,000 kilometers, making it the longest-range solid-fuel missile North Korea has ever tested.

Hours before Wednesday's launch, North Korea's Foreign Ministry said it had agreed to a new round of talks with the US. Despite international condemnation of these repeated tests, the talks between US and North Korean officials are going ahead Saturday in Stockholm, Sweden.

It seems counterintuitive that North Korea would make such an aggressive move by demonstrating advanced weaponry before sitting down for negotiations. However, according to 38 North satellite analysis, the test had been in preparation at least a week in advance. And unlike the other tests, Wednesday's was not personally observed by North Korean dictator Kim Jong Un.

"It is possible the announcement to resume talks and the timing of the test is just an unfortunate coincidence, and the point of the launch was to demonstrate North Korea's growing capabilities against Japan," 38 North's managing editor, Jenny Town, told DW.

The analyst added that that North Korean media has condemned Japan's proposed installation of the Aegis Ashore missile interception system over the past few weeks. The missile landed in Japanese waters, the first time this has happened in two years.

Letting North Korea off the hook

Although North Korea's submarine-based missiles would harder to detect, and would extend the range of Pyongyang's threat, experts say it will be years before these types of weapons are developed to the point of strategic deployment.

As with the previous eight launches, the North Koreans seem to be pushing the limits of what they can get away with. With most of the launches, they claim to have tested "new" types of missiles that could be harder to track and intercept.

Even if North Korea isn't detonating nuclear warheads, and hasn't recently launched an ICBM that could threaten the US mainland, short and medium-range missiles can still devastate cities in South Korea and Japan, while threatening US military installations in both countries.

By allowing an incremental increase in North Korean weapons testing to continue without response, the Trump administration is setting a dangerous precedent that could make negotiations more difficult.

"Submarine-based missile testing in the past would have elicited a more severe response, especially from the UN Security Council," said Town. "The non-effect it has had on US-North Korea talks shows how invested the US administration is in dealing with US-North Korea relations."

Denuclearization at any price?

Since holding two bilateral summits, and one impromptu photo-op meeting at the demilitarized zone separating the two Koreas, Trump has spoken about "tremendous progress" with the Kim regime, and has invested the political capital of US foreign policy capital in getting denuclearization negotiations back on track.

During this time, North Korea has been agreeing to dialogue while steadily testing and refining its conventional weapons systems.

If tolerating these "standard" tests, as Trump has called them, is the price to pay for a greater deal on denuclearization, the US will have a hard time selling a narrative of progress to its regional allies and other members of the UN Security Council.

On Tuesday, the Council will discuss the missile launches, after Britain, France and Germany called for a meeting. The meeting is timed to follow Saturday' talks in Stockholm.

As sanctions relief is the primary bargaining chip, the continual missile launches by North Korea in defiance of UN sanctions puts negotiators in a difficult position.

"This kind of SLBM testing makes it more complicated to put things like easing of US Security Council resolutions on the table. It may also compel the administration to ask for a full missile test ban as part of any deal," said Town.

"The questions of whether US demands on denuclearization measures will be too much, or whether a proposal for limited UN sanctions easing will be considered enough for the North Koreans to find acceptable are still hard to predict."