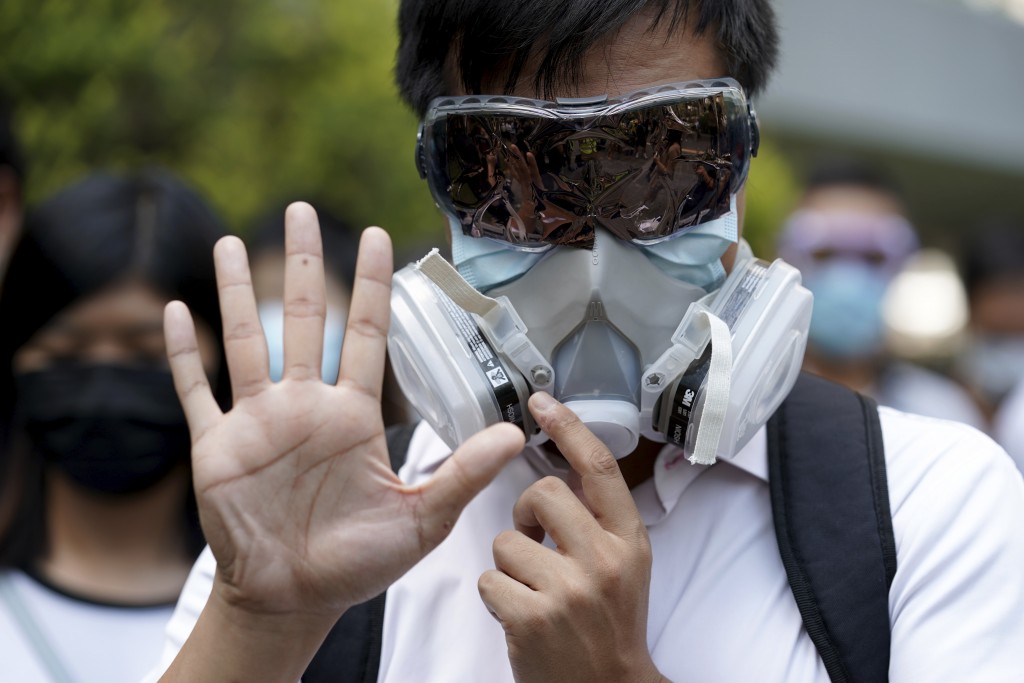 A look at how some other countries have dealt with masked protesters:

In March, following months of often violent yellow vest protests, the French Parliament passed a bill backed by President Emmanuel Macron's government to further prevent violence during protests and to help authorities maintain order. The so-called "anti-troublemakers" law made a crime for protesters to conceal their faces, punishable by up to one year in prison and a 15,000 euro ($17,000) fine. The yellow vest movement broke out last winter to protest Macron’s economic policies seen as favoring the rich. Weekly demonstrations often turned into riots with people setting fires, ransacking luxury stores and clashing with police in Paris and other cities.

Although an early draft of the 2015 law on citizen security, popularly known as the "gag law," banned covering faces during public protests, that wasn't included in the final version approved by a majority of conservative lawmakers. The new law says the use of masks or other ways to cover one's face will be considered an aggravating factor during the commission of an offense, and fines can be heftier if a protester commits another offense while disguising one’s identity.

Following a wave of anti-government protests, Russia introduced a ban on covering faces at public gatherings, arguing that face masks prevent police from identifying protesters in case they commit an offense. Following a complaint from activists in a provincial city who covered their mouths with duct tape in protest of gender and sexual identity discrimination, the Constitutional Court in 2016 ruled that it is possible to cover your face in some ways. In practice, however, Russian police routinely pick up protesters who come out wearing masks of any sort.

It is illegal to cover your face during public rallies, although both far-right and left-wing protesters often try to get around it by wearing sunglasses, baseball caps and scarves.

There is no law against wearing masks during protests in Zimbabwe, where frustration over a collapsing economy often erupts into street demonstrations. Some protesters in the southern African nation cover their faces to avoid being identified by police, who are accused of hunting down people afterward. In neighboring South Africa, where protests over poor service delivery and other issues are common, the law bans the wearing of disguises or masks that obscure facial features and prevent identification. But some demonstrators wear masks anyway, sometimes with the aim of protecting against tear gas, with little or no retaliation from police.

Australia doesn't ban masks, but in its second most populous city, Melbourne, police can direct a demonstrator wearing a mask to leave a protest area. Police must reasonably believe the demonstrator is wearing the face covering primarily to conceal one’s identity or as protection against crowd-controlling substances such as capsicum spray. Those wearing mask who refuse to leave can be charged with failing to comply with a police direction without a responsible excuse.

There is no mask ban in South Korea, where rallies are common but protesters wearing masks are rarely seen. In the past, prostitutes wearing masks, sunglasses and baseball caps to hide their identity rallied in Seoul to protest a government crackdown on red-light districts. Some defectors from North Koreas also put on masks and sunglasses to hide their faces because of safety worries about their relatives in North Korea. In the 1980s, many pro-democracy activists also wore masks because of the tear gas fired by police.

After more than a decade of political unrest punctuated by a recurring cycle of anti-government protests and clashes with authorities, Thailand introduced a new Public Assembly Act in 2015 that severely restricts demonstrations. Among the regulations in the new law, which was passed by the rubber-stamp legislature of the military junta at the time, is a provision outlawing participants at public demonstrations from dressing in a way that intentionally conceals their identity.