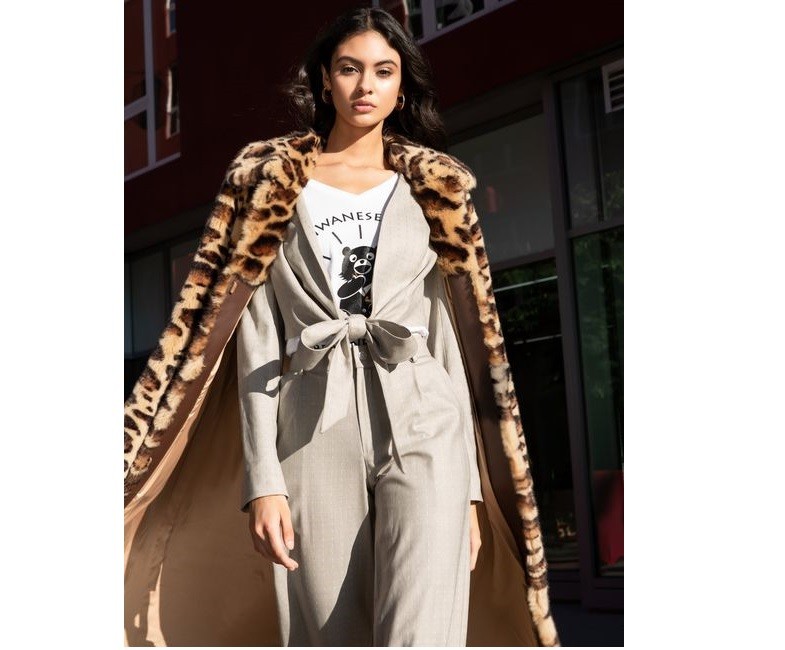 A T-shirt designed by a group of Taiwanese expatriates in the United States to highlight Taiwan's food culture and wildlife was featured in a recent issue of the online American fashion magazine Nylon.

In the Sept. 13 issue of the magazine, a model is pictured wearing the white T-shirt bearing the words "Taiwanese food," "bear necessity" above and below the iconic image of a Formosan black bear, an endemic species that has become representative of the country's wildlife conservation efforts.

The T-shirt, designed by the non-profit Taiwan Center Foundation of Greater Los Angeles, shows the bear eating a classic Taiwanese dish of braised pork on rice.

In the editorial section of the magazine under the heading Strong Independent Woman, the model poses in an outfit that features the T-shirt worn under a tie-waist gray jacket with marching pants. The outfit is completed with a leopard faux fur coat.

The contribution to the magazine is the work of Taiwanese-American freelance stylist Michelle Wu (吳劉宜芳), who is based in Los Angeles.

"It's not easy to have your work highlighted in Nylon," Wu said, adding that she was happy to see the image being reposted on Instagram.

Wu came up with the idea of making the T-shirt part of a design after it was put on sale earlier this year at an annual charity bazaar held by the Taiwan Center Foundation of Greater Los Angeles, which comprises mainly Taiwanese expatriates.

A fashion designer who later became a stylist, Wu has worked with international celebrities like actress Kira Kosarin, who stars as Phoebe in the Nickelodeon series The Thundermans; longtime Disney star Brenda Song; actress Angela Zhou from the American TV series Hell on Wheels; and Tina Guo, a Grammy-nominated musician.

Nylon, an American multi-platform media magazine that focuses on pop culture and fashion, was established in 1999 and is published around the world, linking the fashion trends of New York and London.

In 2017, the magazine ceased regular print publication and switched exclusively to a digital format.