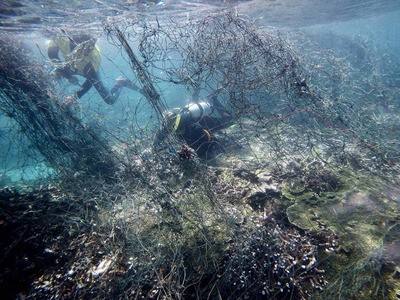 The ghost nets, as they are called, were piled on the coral reefs off the coast of Dongji islet in southern Penghu, scuba divers reported last week, according to the MNPH.

At that time, however, the MNPH could not take action, due to the strong winds and choppy seas caused by Typhoon Mitag, said Hsu Shao-liang (徐韶良), a park management official.

When the waters became calm on Thursday, the MNPH assembled a group of 10 marine conservation volunteers, who traveled to the reefs in two boats to remove the nets, Hsu said.

He said it took five hours for the volunteers to remove the hundreds of meters of abandoned fishing nets that weighed over 800 kg.

The reefs of branching corals, known as the lavender forest because of their striking color, were undamaged, Hsu said.

Ghost nets can be hazardous to the fragile coral reef ecosystem because they block the sunlight and thus hamper coral photosynthesis, he said.

Since 2014, a method of fishing known as bottom-set gillnetting, which has the potential to indiscriminately destroy marine life over a long period of time, has been banned inside the national park, but local fishermen are still allowed to use drift nets.

Following the partial restriction on fishing in the area, eco-tourism activities such as guided snorkeling and scuba-diving excursions have been providing new sources of income for the residents.