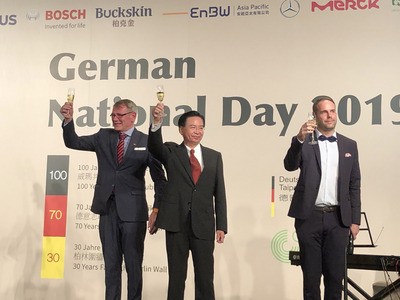 The German Institute Taipei highlighted cooperation between Taiwan and Germany, especially in the field of renewable energy, as part of German National Day celebrations in Taipei on Thursday.

In a statement handed out to the media, the de facto German Embassy in Taiwan described democracy as an important value that links Germany and Taiwan and serves as a foundation for a closer friendship and cooperation between the two countries.

Thomas Prinz, Director General of German Institute Taipei, pointed out in his remarks that democracy does not come easy and is the only form of government that respects universal human rights.

He also cited cooperation between Germany and Taiwan in several fields, such as renewable energy, the economy, education and culture.

Prinz said Germany is playing an important role in the expansion of renewable energies in Taiwan and leading German companies are also participating in advancing the transformation of Taiwan's energy system.

"This close cooperation in the field of renewable energies must be further intensified in the future in order to jointly master the challenges of this comprehensive Energy Turnaround project," Prinz stressed.

He also mentioned that there are 469 cooperation agreements between 146 German universities and 62 universities in Taiwan and more than 2,000 Taiwanese students studying in Germany as of 2017.

Prinz also said the prospects are bright for cooperation between Taiwan and Germany in the "5 plus 2 Industrial Innovation Plan," referring to an initiative by Taiwan's President Tsai Ing-wen (蔡英文) which covers smart machinery, Asian Silicon Valley, green energy, defense, biotech and pharmaceuticals, new agriculture and the circular economy.

Meanwhile, Taiwan's Foreign Minister Joseph Wu (吳釗燮) congratulated Germany and its people on the special occasion and stressed that Taiwan and Germany are like-minded countries that share the values of freedom, democracy the human rights.

Wu also thanked Germany for its support of Taiwan's efforts to seek greater international participation, including at the World Health Assembly (WHA), the International Civil Aviation Organization (ICAO) and other organizations under the United Nations.