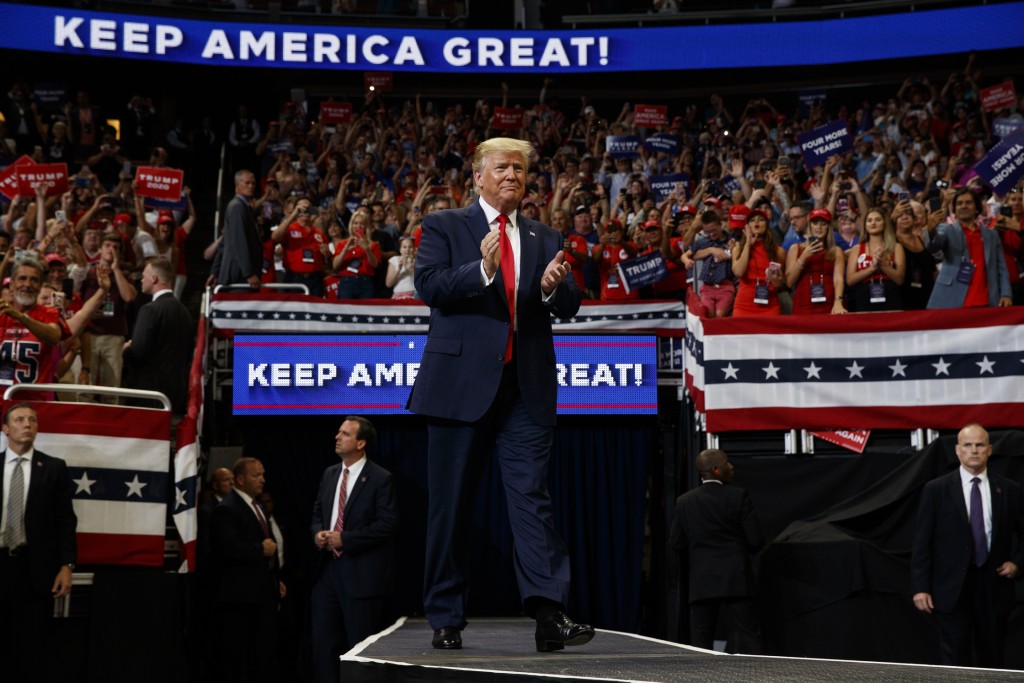 TALLAHASSEE, Fla. (AP) — President Donald Trump is leaving Washington for the first time since House Democrats ramped up their impeachment inquiry _ and he’s heading straight into the warm embrace of a Republican stronghold.

Trump is due to visit The Villages, a sprawling retirement hub about an hour north of Orlando that is a must-stop for GOP candidates. The president plans to announce an executive order to protect Medicare during his visit Thursday and address an invitation-only group.

Support for Trump is holding firm in Florida, the largest swing state in the 2020 election with 29 electoral votes that are crucial for the president’s reelection.

Gov. Ron DeSantis and the Republican Party of Florida sent out a fundraising email in which it promised to put all donations into a newly established “Presidential Protection Fund.” Chairman Joe Gruters, a state senator who served as co-chair of Trump’s 2016 Florida campaign, said response to the email has been “great,” but he said he didn’t know how much money had been raised.

“When I served in Congress, I fought back against the Democrats’ witch hunts every single day,” DeSantis wrote in the email. “I REFUSED to let them overturn the 2016 election and erase your vote from history. Now that Democrats are officially moving to impeach our duly elected president, my duty to protect him isn’t over. I want the President to know that we have his back in this fight 100%.”

DeSantis credits Trump for helping him win office in November, and it was the president who appointed Peter O’Rourke, a candidate the governor backed, as the new executive director of the state Republican party after several months of instability.

“The party’s moving forward,” Gruters said. “We’re united: the president, the governor and myself. ... We are firing on all cylinders.”

As for the impeachment inquiry, Gruters said it will only drive up turnout for Trump among the GOP base.

“The president has been under siege non-stop ... since he won the election,” he said, adding that Democrats “don’t have a candidate that can win and they’re not right on the issues, so the only thing they can do is try to discredit the president.”

More than 120,000 people live in The Villages, which is 55 percent Republican. The community is mostly located in Sumter County, which supported Trump with 68% of the vote in 2016, compared to 49% statewide. The White House hand-picked each of the approximately 1,000 guests from a list provided to them by local GOP elected officials and party leaders, said county party chairman John Temple.

“The strongest support for Trump in Florida, arguably, is in The Villages,” said University of Florida political science professor Dan Smith, who agreed that the impeachment inquiry would only strengthen that support.

Retiree and Villages resident Paula Bedner, a Republican who didn’t get an invitation to Thursday’s event, said she and others “are madder than ever because it’s like, ‘Enough of this nonsense.’”

Democratic strategist Steve Schale, who ran former President Barack Obama’s 2008 Florida campaign and was a top Florida adviser for Obama’s 2012 reelection, said it makes sense for Trump to visit The Villages during the impeachment inquiry.

“It’s very hard to see a scenario where he would lose Florida and win the presidency,” Schale said. “He’s going to a friendly crowd. There aren’t going to be any detractors.”

Thursday will mark Trump’s ninth visit to Florida this year. Most of his trips have been to his Mar-a-Lago resort, but he’s also had rallies in Orlando and Panama City Beach; official visits to Miami to address Venezuelan expatriates; and Lake Okeechobee to tour a waterways project. Florida is by far Trump’s favorite state for rallies before appreciative crowds: He’s held seven here since taking office _ far more than in any other state.

In contrast to harsh criticism of the impeachment inquiry from many Florida Republicans, U.S. Sen. Marco Rubio has taken a more measured approach on the issue.

Rubio told Fox News on Wednesday that he doesn’t think Trump should have brought up Biden with the Ukraine government, but on Twitter he said there shouldn’t be a rush to judgment.

Republican U.S. Sen. Rick Scott was more pointed in his remarks, ridiculing Democrats for focusing on the inquiry instead of other issues facing the country.

“The Democrats, if Trump changes shoes, that must be an impeachable offense,” Scott said on Fox News last week. “I mean, every day it’s just, ‘Impeach him!’” Scott said.