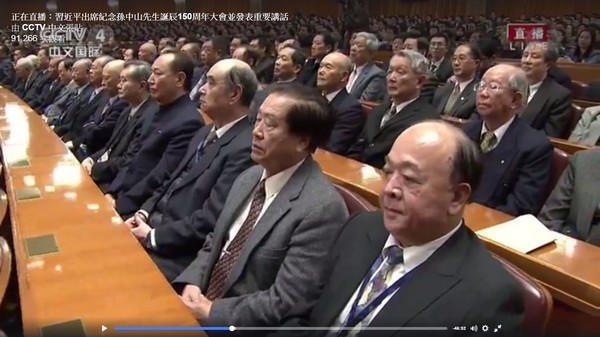 TAIPEI (Taiwan News) — Nine retired Taiwanese generals reportedly skipped the celebrations for Communist China's 70th anniversary in Beijing on Tuesday (Oct. 1) because they feared having to pay a NT$10 million (US$322,000) fine based on a new law barring them from attending such activities.

In November 2016, retired Lt. Gen. Wu Sz-huai (吳斯懷) and other retired generals went to China to participate in a Sun Yat-sen memorial event hosted by Chinese President Xi Jinping (習近平). When the Chinese national anthem was played, the generals were caught on video standing up to pay their respects, angering many in Taiwan.

In July of this year, Taiwan's Legislative Yuan amended the Act Governing Relations between the People of the Taiwan Area and the Mainland Area, to prohibit military officers ranked major-general or higher, deputy chiefs and chiefs of the Ministry of National Defense, Ministry of Foreign Affairs, Mainland Affairs Council (MAC) and National Security Bureau, as well as chiefs of intelligence agencies, from attending political or military events held by the Chinese Communist Party, Chinese government, or Chinese military.

Those found to be "impairing the dignity of the nation" by paying obeisance to Communist Chinese flags, emblems, or anthems, could see their monthly pensions halted. Alternatively, they could face a fine of between NT$2 million and NT$10 million.