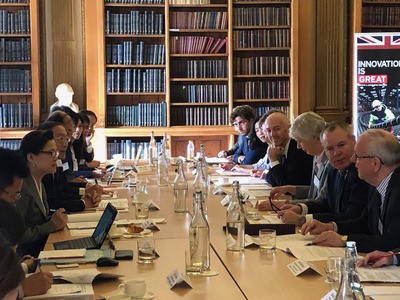 The United Kingdom and Taiwan held the 22nd round of UK-Taiwan trade talks in London Tuesday, discussing possible cooperation in the fields of agriculture, energy and pharmaceutical industries, the British Office Taipei said that day.

The talks, which first took place in 1991, were presided over by UK Trade Policy Minister Conor Burns and Taiwan's Deputy Minister of Economic Affairs Wang Mei-hua (王美花), the British Office Taipei said in a press statement.

The two sides agreed to work together on the UK's application to export British lamb to Taiwan. The meeting also focused on market access issues and ways to boost cooperation on offshore wind, pharmaceuticals and financial services, the British side said.

More than 18 U.K. companies have set up offices in Taiwan as the island plans to increase renewable energy production from 4 percent to 20 percent of supply by 2025, much of it from offshore wind farms, the office added.

"Taiwan is one of the fastest growing export markets in Asia and there are huge opportunities for British businesses in a variety of sectors including offshore wind, financial services and food and drink," the British Office Taipei said, quoting Burns.

Meanwhile, Wang said that although Brexit creates uncertainty for the business community, it also comes with many opportunities to enhance bilateral cooperation between the U.K. and Taiwan, according to U.K officials.

"In the Trade Talks, both sides committed to enhance cooperation in areas such as Fintech, green finance, smart cities, and upholding the rules-based multilateral trading system - the WTO." Wang said.

UK-Taiwan bilateral trade amounted to £6.6 billion (US$8.2 billion) in 2018, according to the British Office Taipei. It also mentioned that Taiwan has allowed imports of quality British pork since August 2018 and £4.58 million worth of pork products were exported to Taiwan within the year.