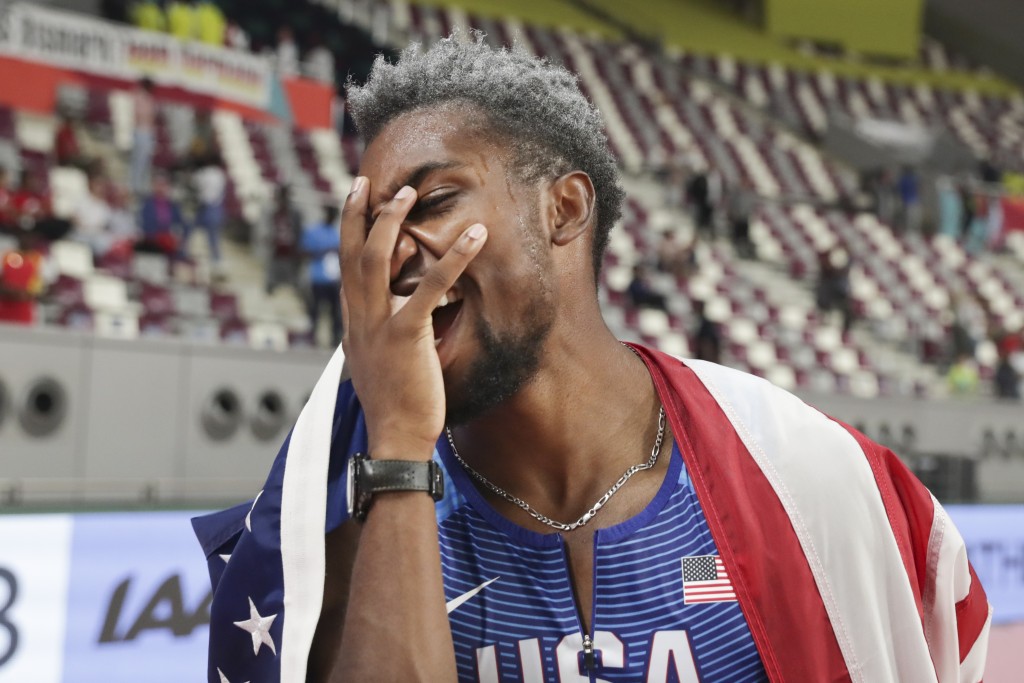 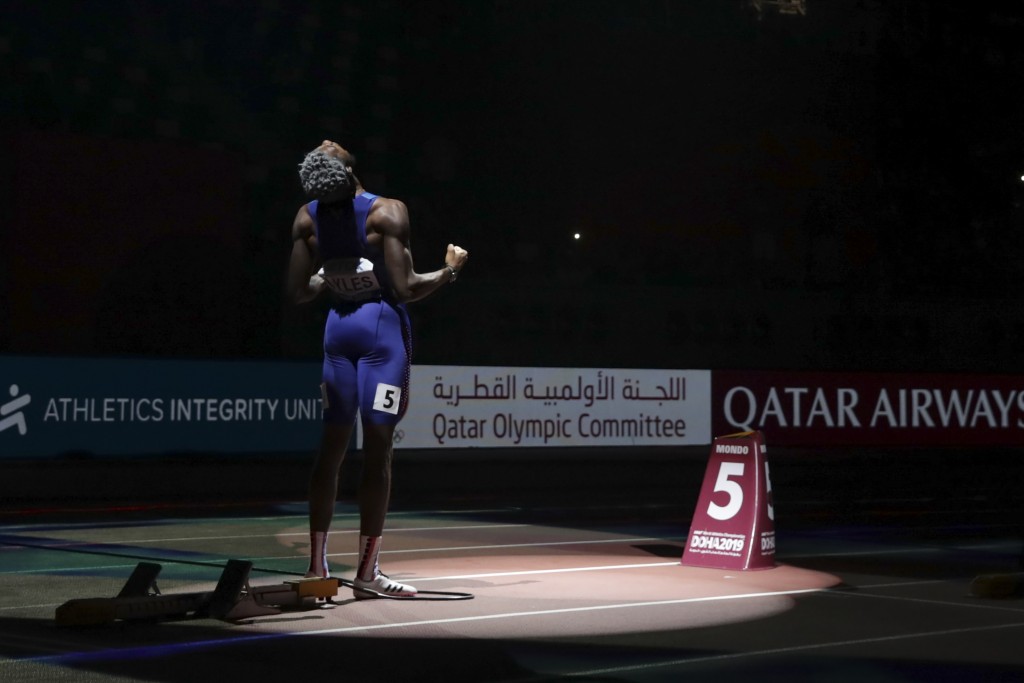 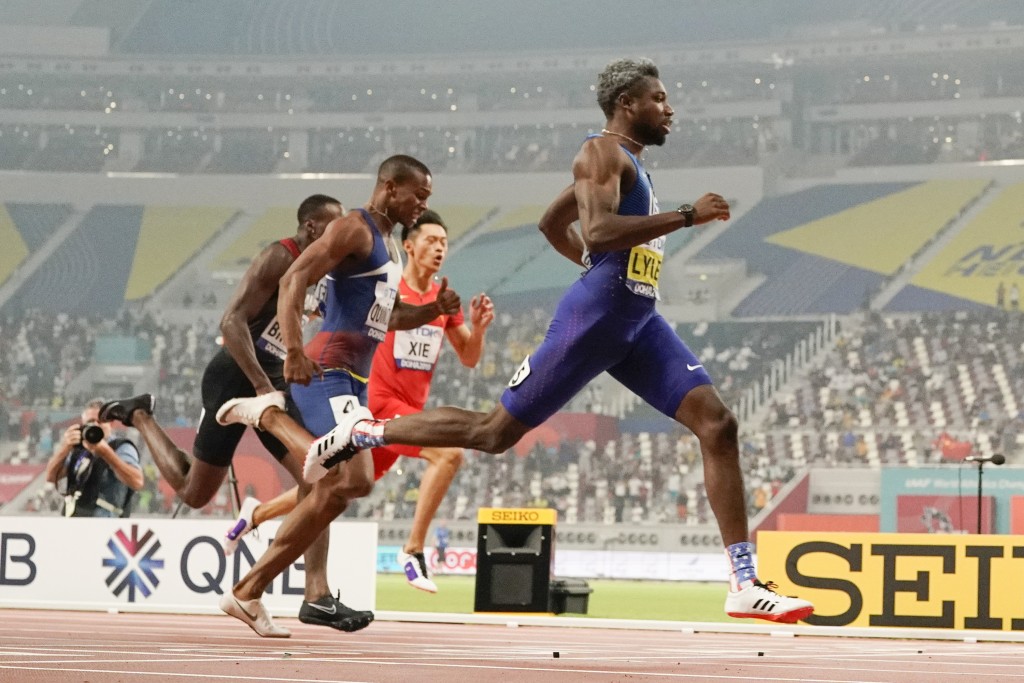 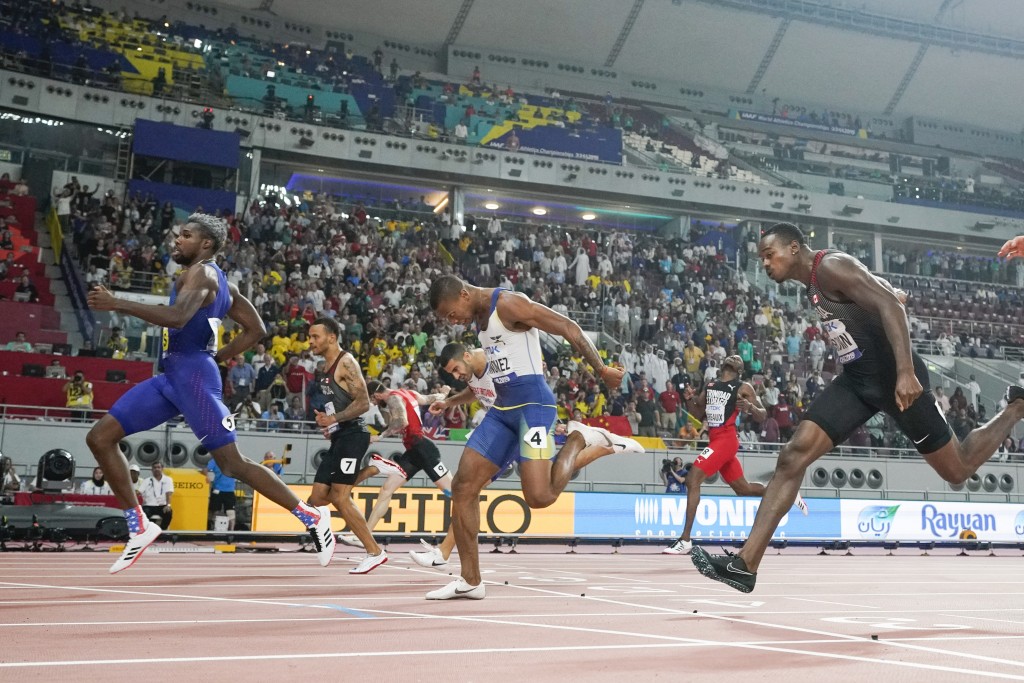 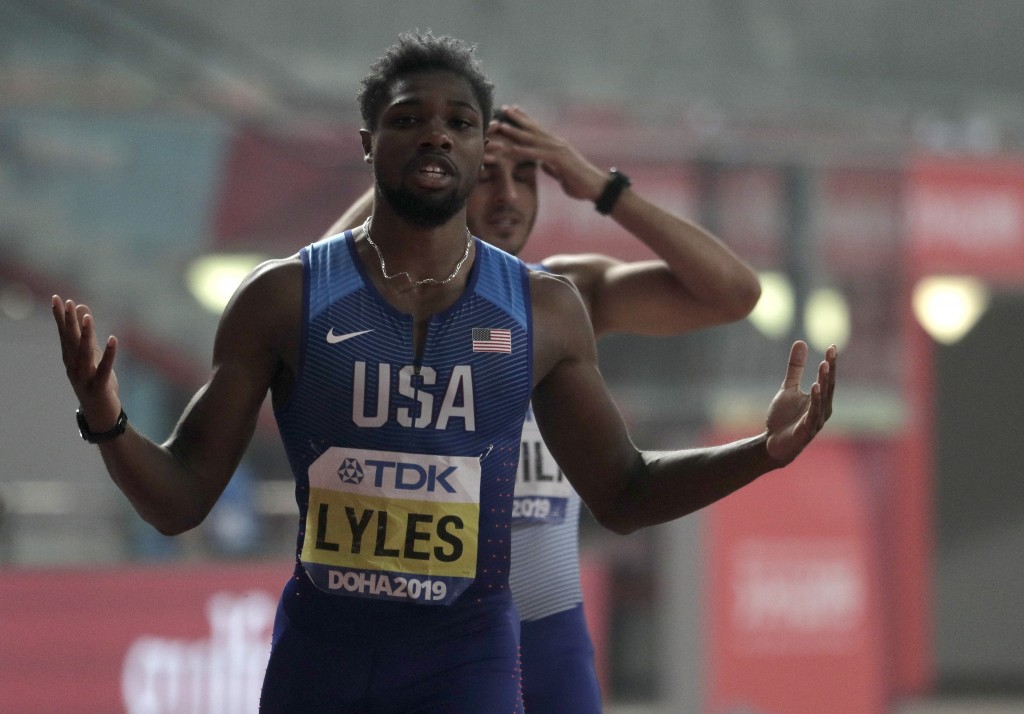 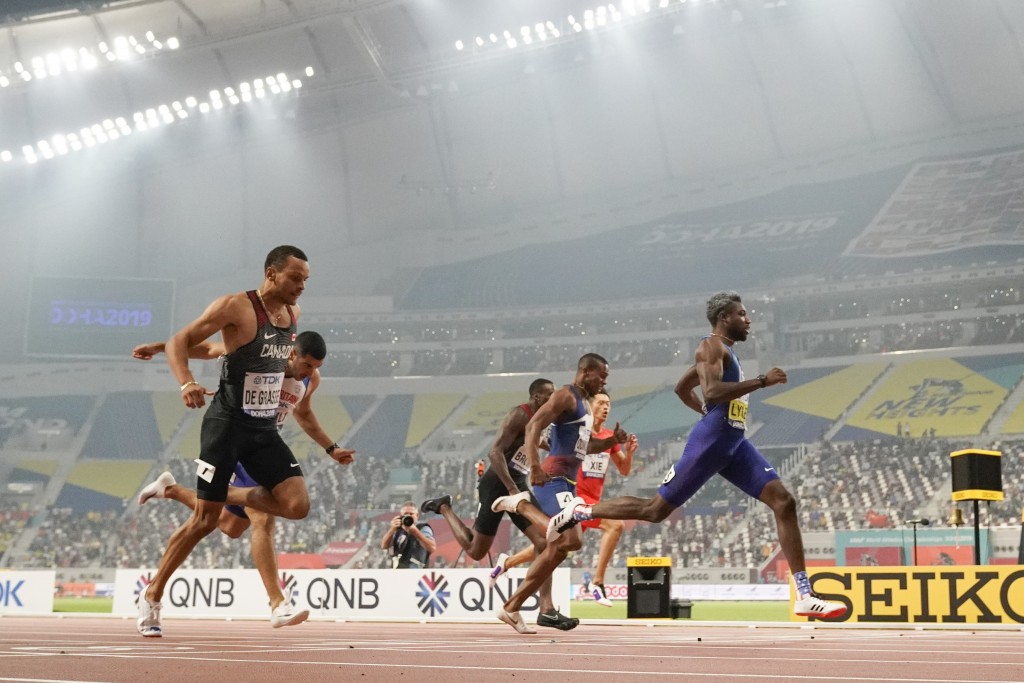 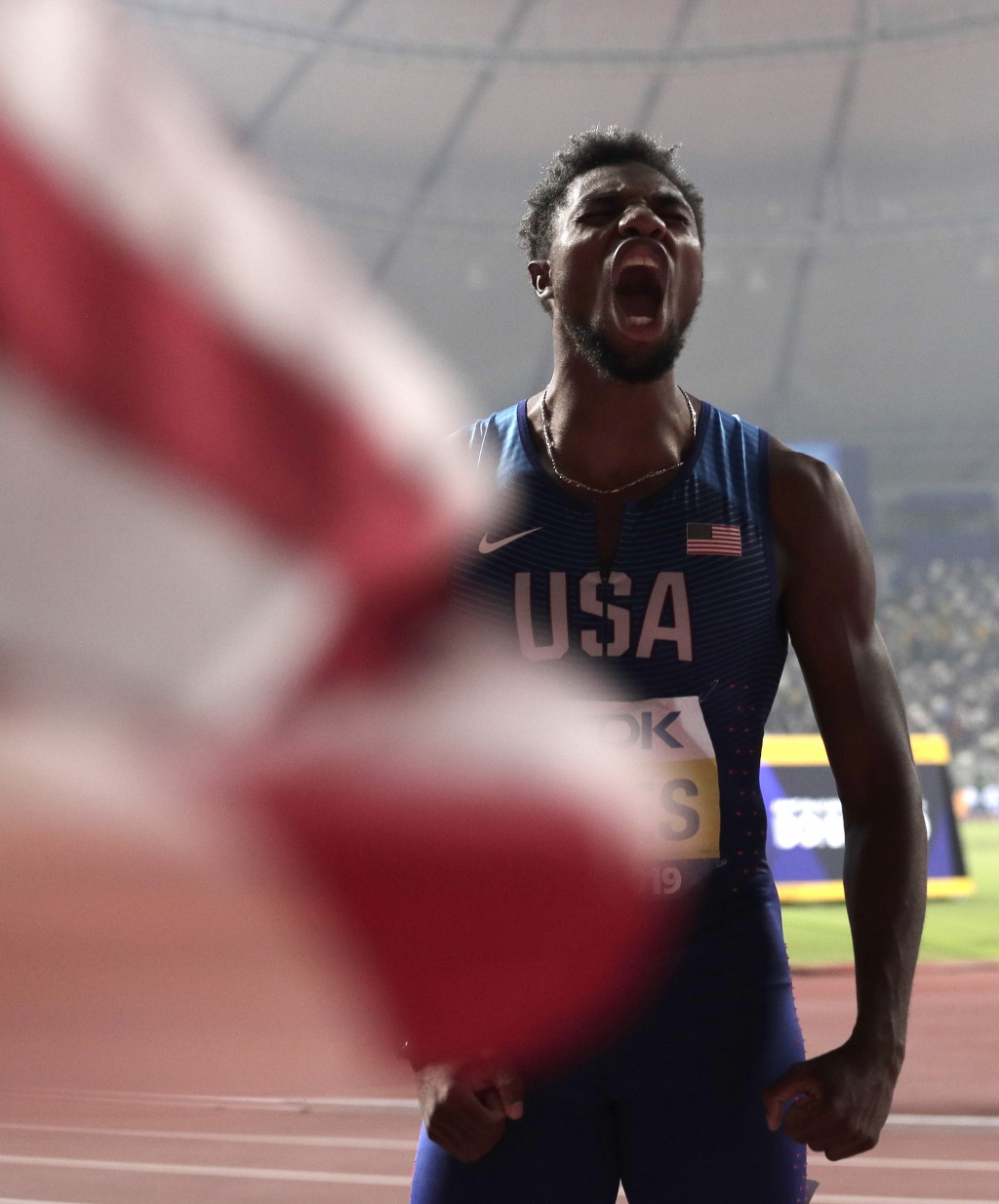 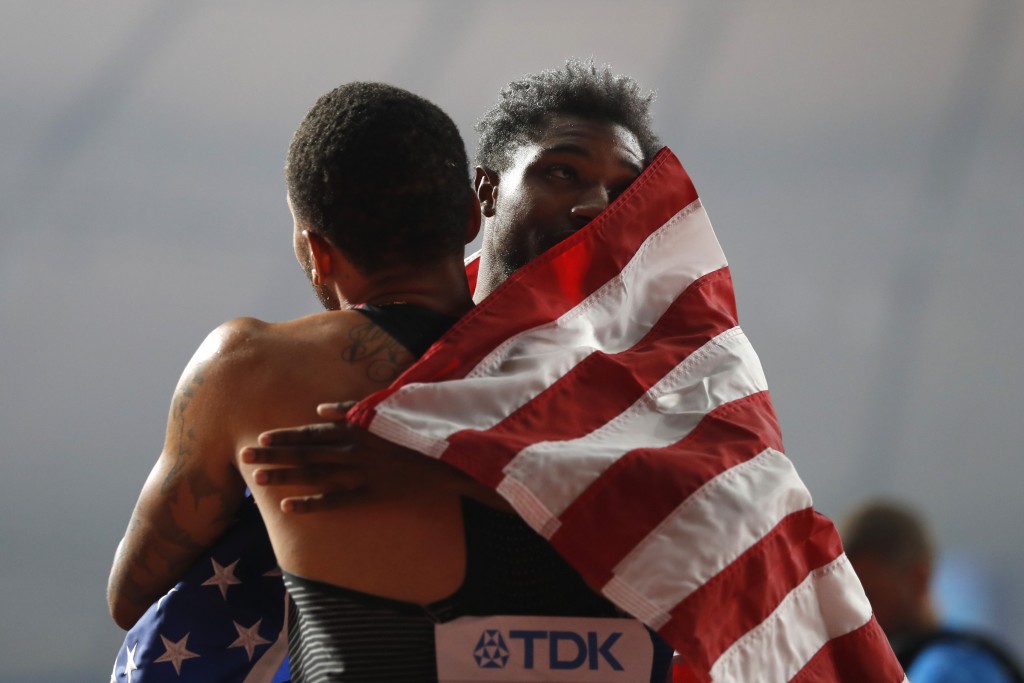 He just couldn't decide between the two flavors as a reward after winning the 200-meter title Tuesday night at the world championships.

"That's how I'm going to celebrate my season," Lyles said.

And what a season it was for the charismatic, fun-loving 22-year-old Lyles, who's providing just the boost track and field needs in this post-Bolt era. Just don't refer to him as the new Usain Bolt, though.

"I'm me," said Lyles, who dyed his hair silver for the big occasion. "And if you like me, I'll happily entertain you. It's my time."

He certainly took a little bit of time to take over the race.

Trailing going around the bend, Lyles kicked it into gear to pass Adam Gemili of Britain . Lyles finished in a time of 19.83 seconds to beat an exhausted Andre De Grasse of Canada by 0.12 seconds. Alex Quinonez of Ecuador was third.

Even behind that late, Lyles, who grew up in Alexandria, Virginia, wasn't the least bit concerned.

"It was one of those situations where I knew I had to get out and I saw they were moving on the turn and I just started pumping my arms on the turn. I knew I could sling off and grab the momentum," Lyles explained. "Because no matter where I am in the race, I will always be able to come back."

After the race, the party was on. Lyles waved the American flag, kneeled a few times and kissed the track. It was rather subdued for the sprinter known for his dynamic dance moves.

Perhaps he's saving his best stuff for 10 months from now at the Tokyo Games.

At this version of the championships, he threw his energy into winning the 200.

Now that the box is checked, he's thinking bigger: Running the 100 and 200 in Tokyo. It could be quite a showdown with teammate Christian Coleman, who won the 100 at worlds and then skipped the 200. He plans to double as well. Same with De Grasse, who did both at worlds and took bronze in the 100.

As a reminder of his goal — to win gold — Lyles put it into his phone and muttered it to himself over and over while he was driving. When it finally happened, he didn't know how to really react.

"It's like something you've imagined so many times in your head that one you actually active it it's like I thought, 'We already did this?'" Lyles said. "Finally, to have done it feels unbelievable. It does feel good that I'm at the end of the season and we came out with the ultimate victory, which is a gold medal."

His championships aren't over. He'll likely team with Coleman and Justin Gatlin as part of the U.S. 4x100 men's relay team. Lyles was coy on his relay leg.

"That's a secret," he said. "I can't be giving up U.S. confidential information."

"He reminded me of my younger self, the way he runs," said De Grasse.