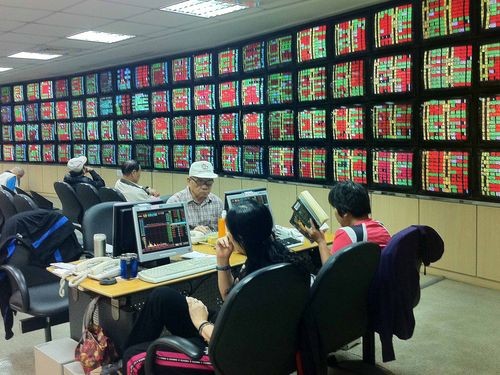 Shares in Taiwan moved sharply higher Tuesday, jumping more than 130 points as major suppliers to Apple Inc. received a significant boost from the strong showing of shares in the U.S. consumer electronics giant overnight on the back of better than expected sales of the latest iPhones, dealers said.

Among the Taiwanese suppliers to Apple, contract chipmaker Taiwan Semiconductor Manufacturing Co. (TSMC) led the upturn after the stock hit a new closing record high, also boosting its market capitalization to a new high, they said.

The market opened up 0.24 percent in a mild technical rebound from the previous session, when the Taiex ended down 0.39 percent, and buying momentum accelerated to vault the Taiex past 10,900 points with large cap Apple concept stocks in focus as investors took their cue from a 2.4 percent increase in the U.S. tech giant's shares overnight, dealers said.

The strength of the local main board continued until the end of the session, helping the Taiex close at the day's high above the 10,900 point mark, paving the way for the index to challenge 11,000 points in the near term, they said.

"Thanks to TSMC and other Apple suppliers, the bellwether electronics sector served as the driver to the upturn of the main board again today," Concord Securities analyst Kerry Huang said, referring to the gains posted by Apple shares overnight.

Apple's gains came after J.P. Morgan raised its price target on Apple shares from US$243 to US$265, reflecting better than expected sales of the iPhone 11 series. The U.S. brokerage said Apple shares could rise more than 20 percent as sales of its new iPhones were "stronger than muted expectations."

Shares in TSMC, which is believed to be the supplier of processors for new iPhones, rose 2.94 percent to close at NT$280.00 with 71.65 million shares changing hands. The gains posted by TSMC pushed up the stock's market cap to a new high of NT$7.26 trillion.

As TSMC is the most heavily weighted stock on the local market, the bellwether electronics sector closed up 1.90 percent and the semiconductor sub-index ended up 2.64 percent.

In addition to the positive leads from Apple, Huang said, investors were also upbeat about TSMC's efforts in 5G and high performance computing technology development.

"I think foreign institutional investors continued to pick up TSMC and other tech heavyweights today and that's why turnover expanded to more than NT$140 billion at the end of the session," Huang said.

According to the TWSE, foreign institutional investors bought a net NT$13.995 billion worth of shares on the main board Tuesday. Huang said the strong buying in tech stocks and the electronics sector accounted for about 76 percent of turnover on Tuesday.

Huang said as funds largely moved to the tech sector, old economy and financial stocks were mixed throughout the session.

"After the Taiex closed well above 10,900 points, the local main board has a good chance of challenging 11,000 points as the main board has turned technically sound," Huang said.

"However, investors had better watch closely the high technical hurdles ahead of that level as the main board has tried about 10 times but failed to stay above that level since the beginning of 2018," Huang added.