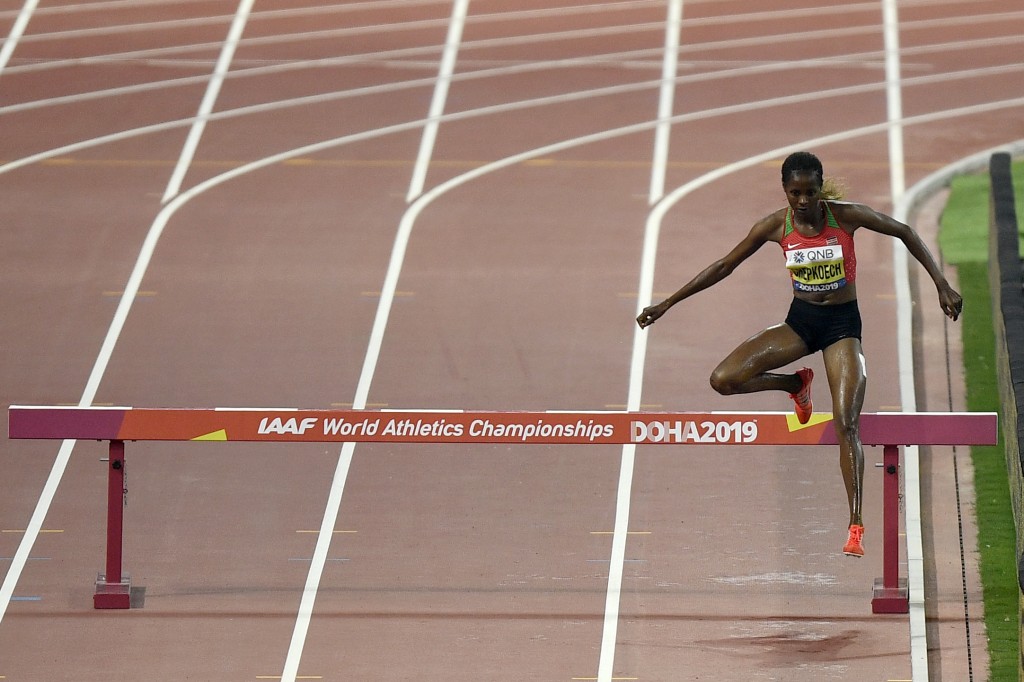 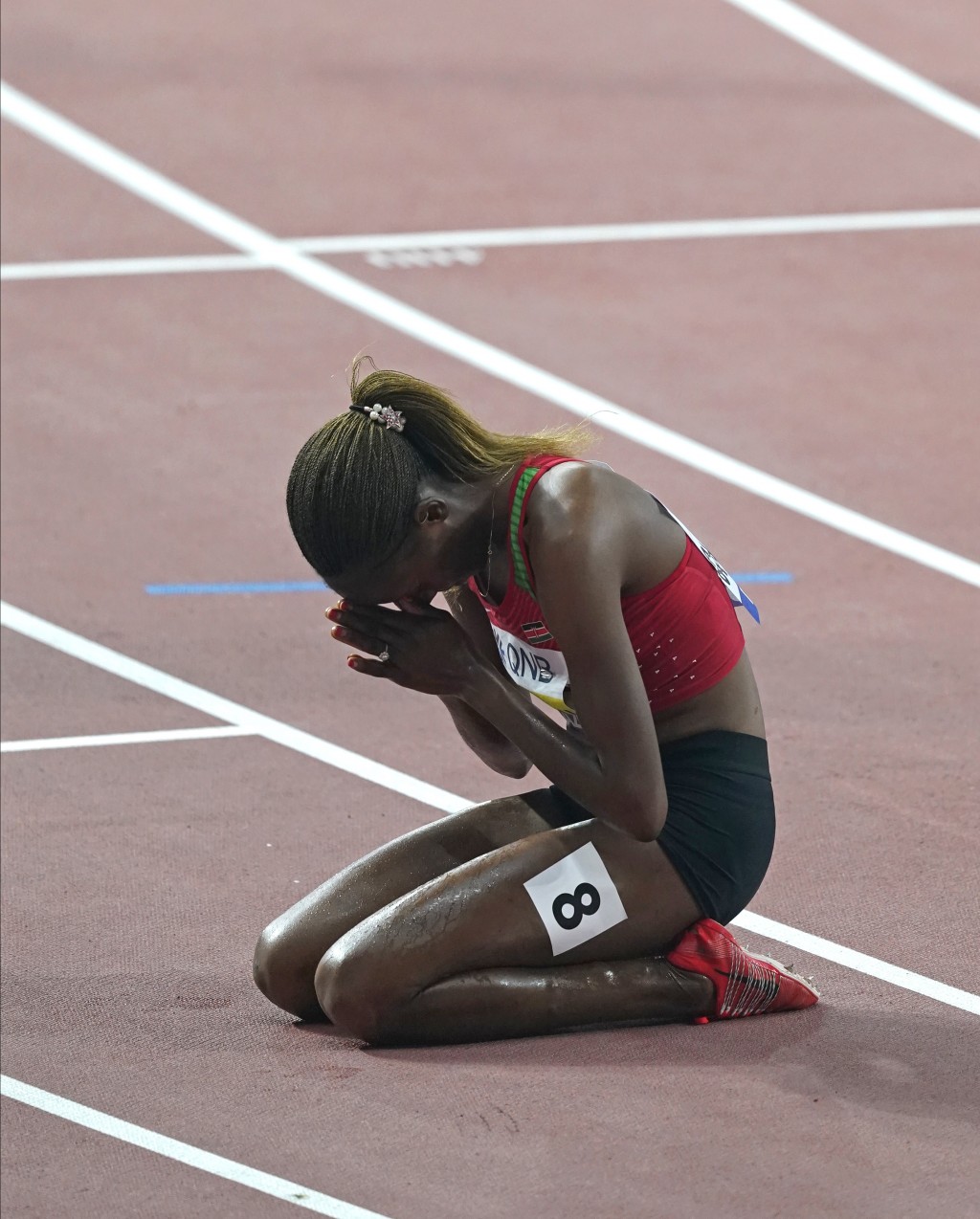 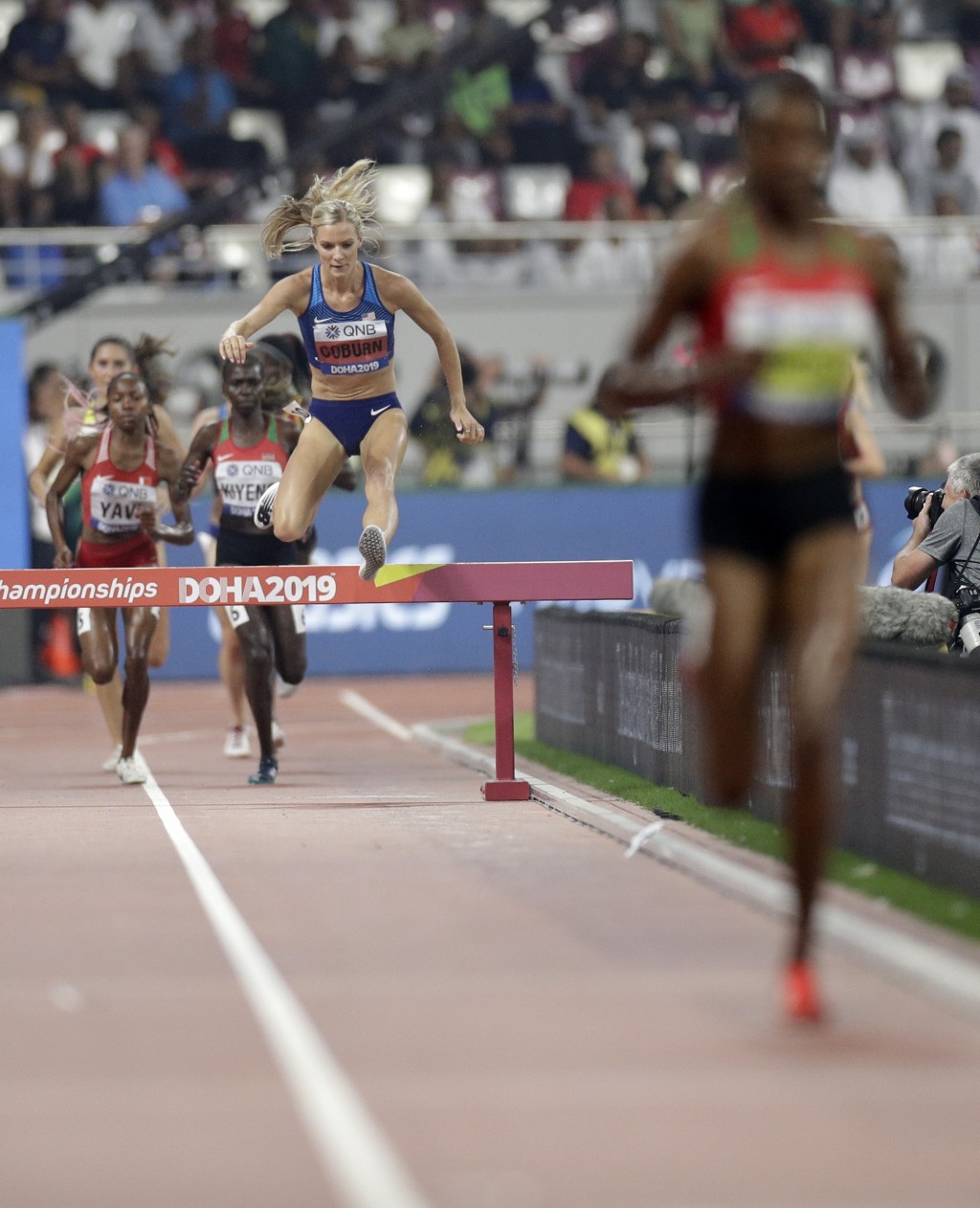 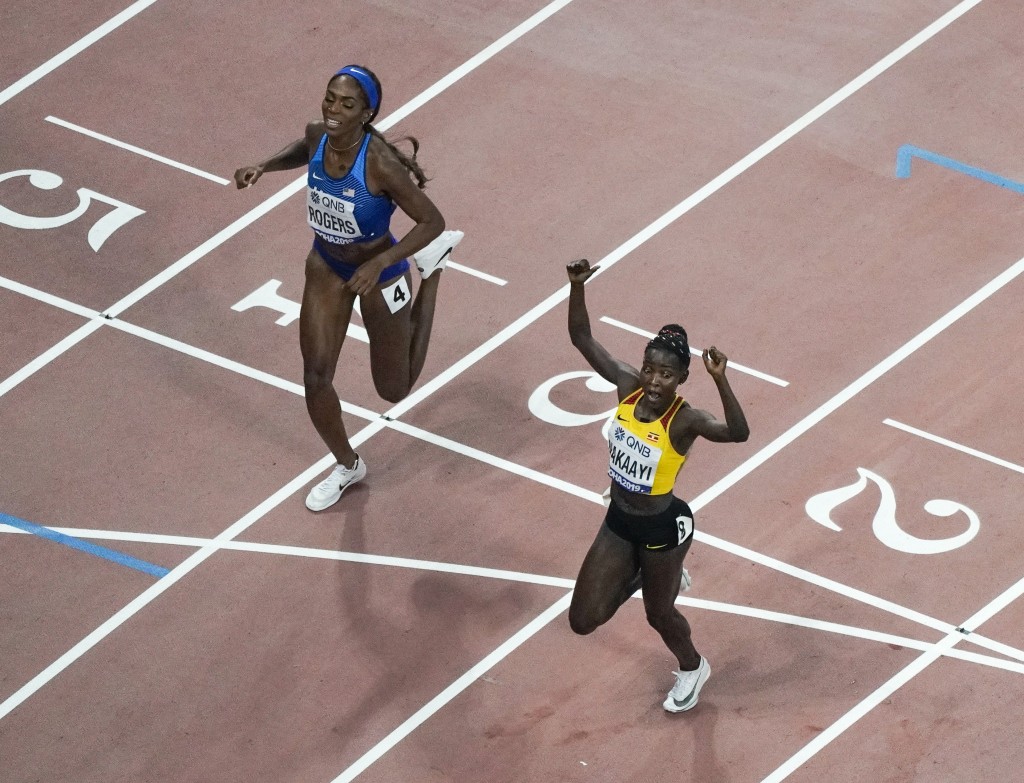 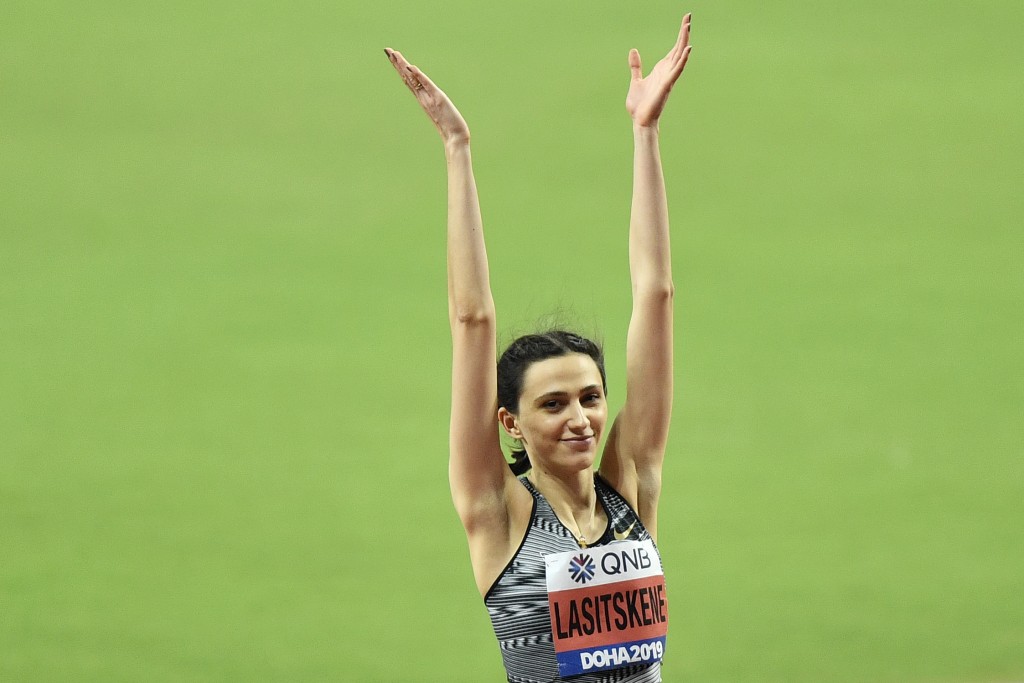 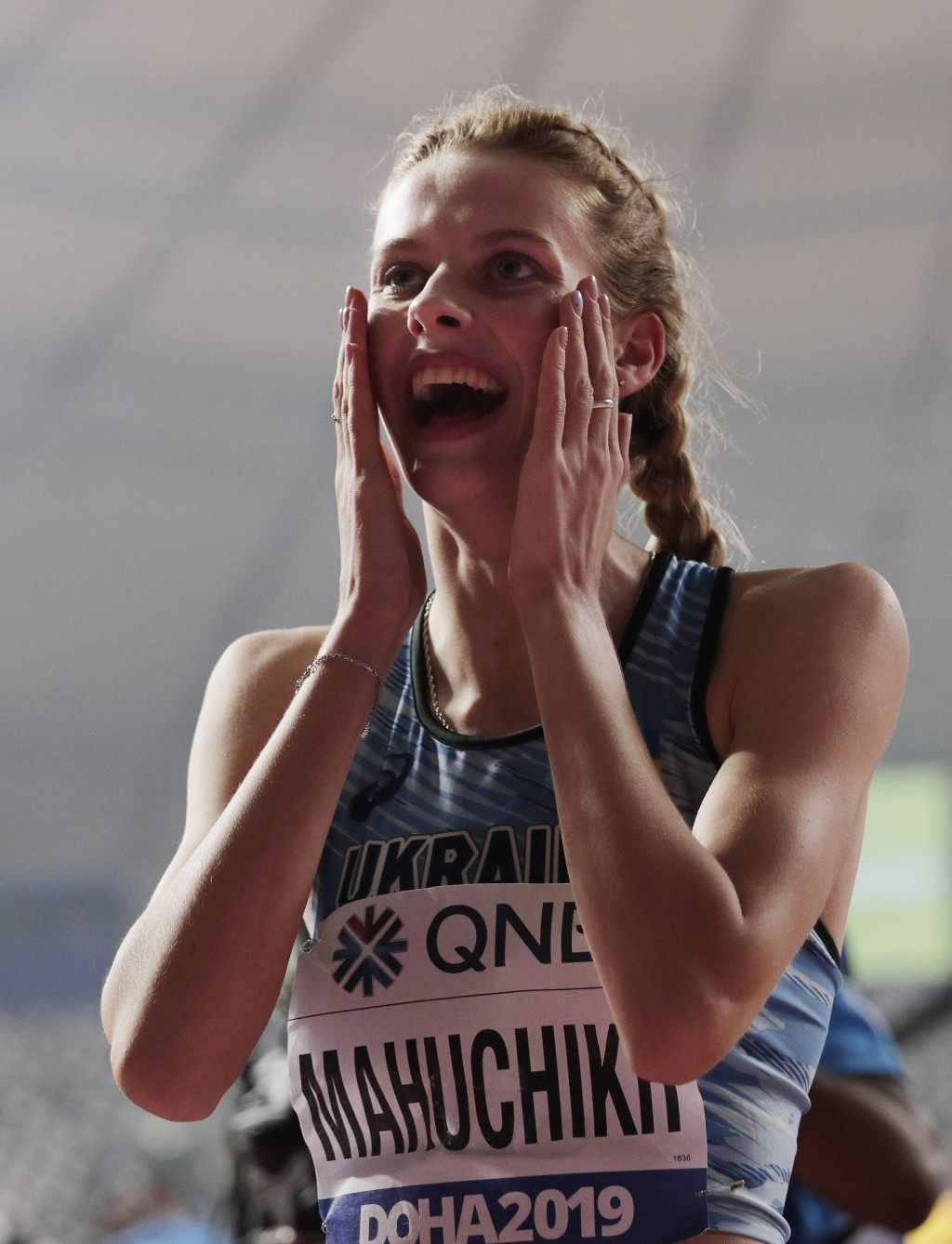 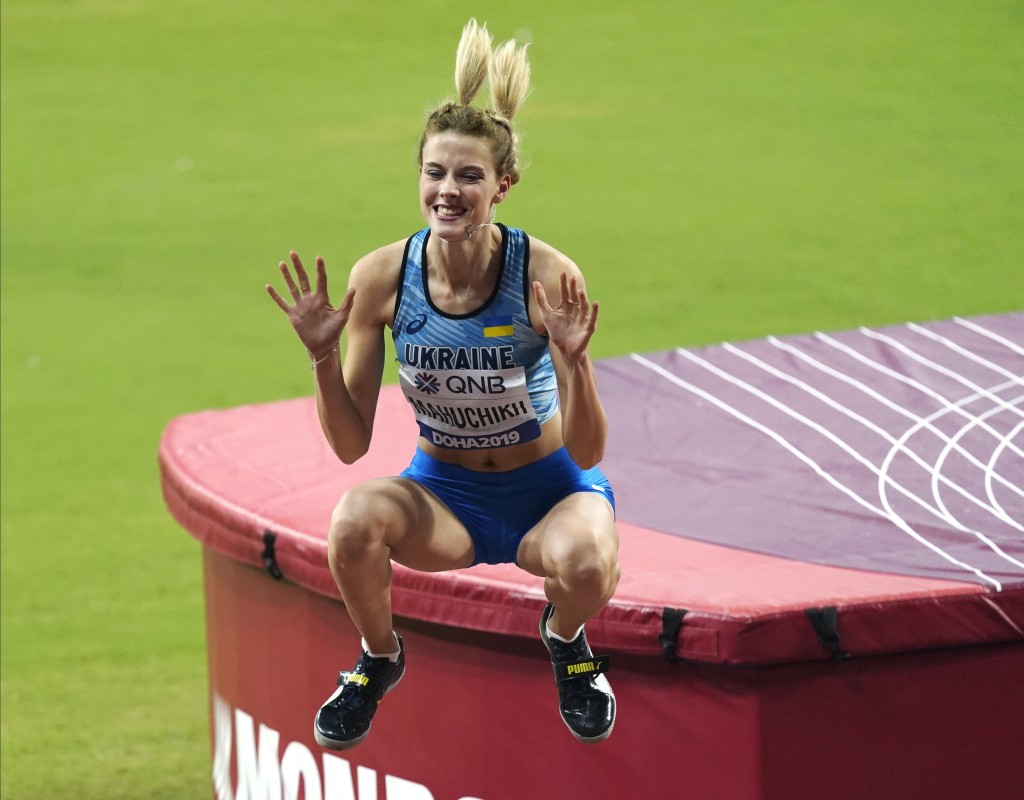 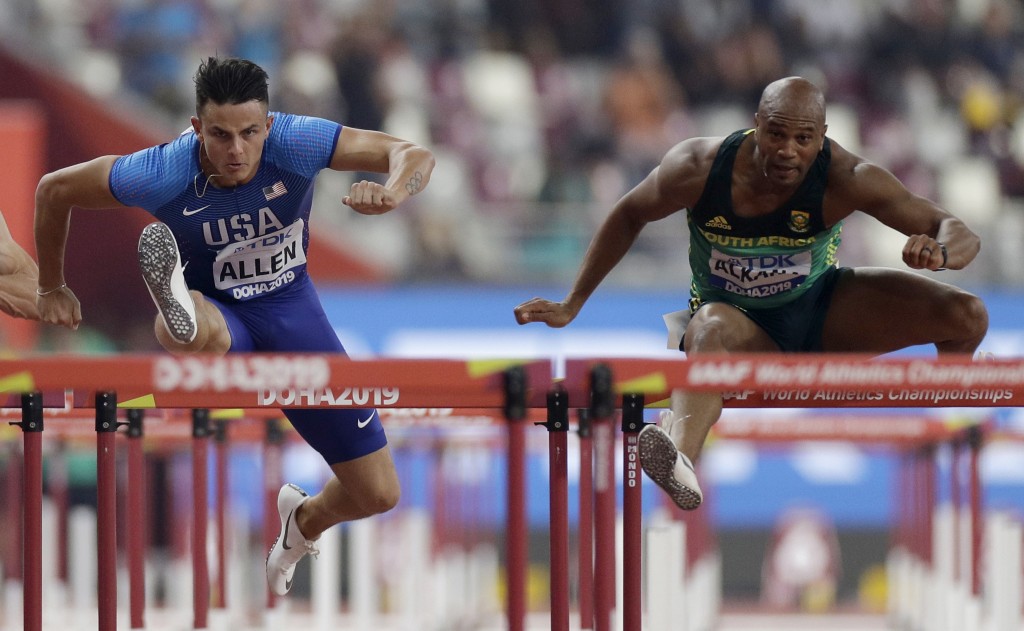 DOHA, Qatar (AP) — Kenyan Beatrice Chepkoech was so new to the steeplechase two years ago that she missed a water jump and had to make a U-turn, costing her a medal at the world championships.

Since then, she has gained experience, broke the world-record, and Monday, won the world title in dominating fashion.

Chepkoech blazed out to a big lead and only got stronger from there as she finished in 8 minutes, 57.84 seconds, 4 1/2 seconds ahead of runner-up Emma Coburn of the U.S.

"I decided to be in front," Chepkoech said.

Coburn had a feeling Chepkoech would jump to a big lead. Coburn, the world champion in 2017, knows that Chepkoech likes to make others hurt by pushing the pace. She stayed patient, hoping her rival would lose steam.

"I was letting her do her thing," said Coburn, who finished in a personal-best time of 9:02.35. "That's how she's been most successful. The times she's lost is the times that she's been with the pack and got out-kicked. But I thought there's a chance she might come back."

Chepkoech is a former 100-meter sprinter turned 1,500-meter specialist turned steeplechaser. She made the switch leading into the London world championships and was so raw that she simply forgot to cut inside for the first water jump.

"At that time in 2017, I was not having any experience for the steeplechase," she explained. "Now, I have enough experience. That's why I won the race today."

FROM OUT OF NOWHERE

Rounding the final bend in the 800 meters, American Raevyn Rogers was in seventh and out of the picture. With a late surge, she charged all the way to the silver medal and nearly caught winner Halimah Nakaayi of Uganda. Ajee Wilson of the United States finished third.

"I knew I was close to the back," Rogers explained. "I just went for it."

It was a race held without defending champion Caster Semenya of South Africa. She missed the championships as she fights the IAAF's latest version of a regulation that forces her to lower her level of natural testosterone.

Nakaayi was the surprise winner in a personal-best time of 1:58.04.

Asked about not having Semenya in the field, Nakaayi said: "I just focus on my own race. I couldn't focus on Caster Semenya."

There was confusion in the women's high jump as Ukrainian silver medalist Yaroslava Mahuchikh seemed to start celebrating before the competition was finished.

Mahuchikh and Russian Mariya Lasitskene had both cleared 2.04 meters, far ahead of their rivals, when Mahuchikh grabbed a Ukrainian flag and started jumping up and down in front of the stands.

With the crowd expecting a duel for the gold, Lasitskene seemed frustrated and walked over to the referees' table, signaling at Mahuchikh's celebrations.

Having already beaten her personal best, Mahuchikh surprised many onlookers by deciding not to attempt a higher jump, giving Lasitskene — competing as a neutral athlete because of Russia's doping suspension — a third gold medal. Though Mahuchikh and Lasitskene had both cleared the same height, Mahuchikh would have had to jump higher than the Russian to take gold since she had posted six failures at lower heights.

Hurdler Devon Allen was a football player at the University of Oregon before focusing on a track career. That's why he has an interest in seeing the ramifications of California Gov. Gavin Newsom signing a law allowing college athletes to make money from endorsements. California will let college athletes hire agents and make money from endorsements , defying the NCAA and setting up a likely legal challenge that could reshape U.S. amateur sports.

Allen, who advances to Wednesday's semifinal of the 110-meter hurdles, thinks it's a step in the right direction.

"It's just weird that in the media, when someone breaks NCAA rules, it's like they're a criminal," Allen said. "They make it seem like you're the worst person in the world if you take some money or you sell your shoes."