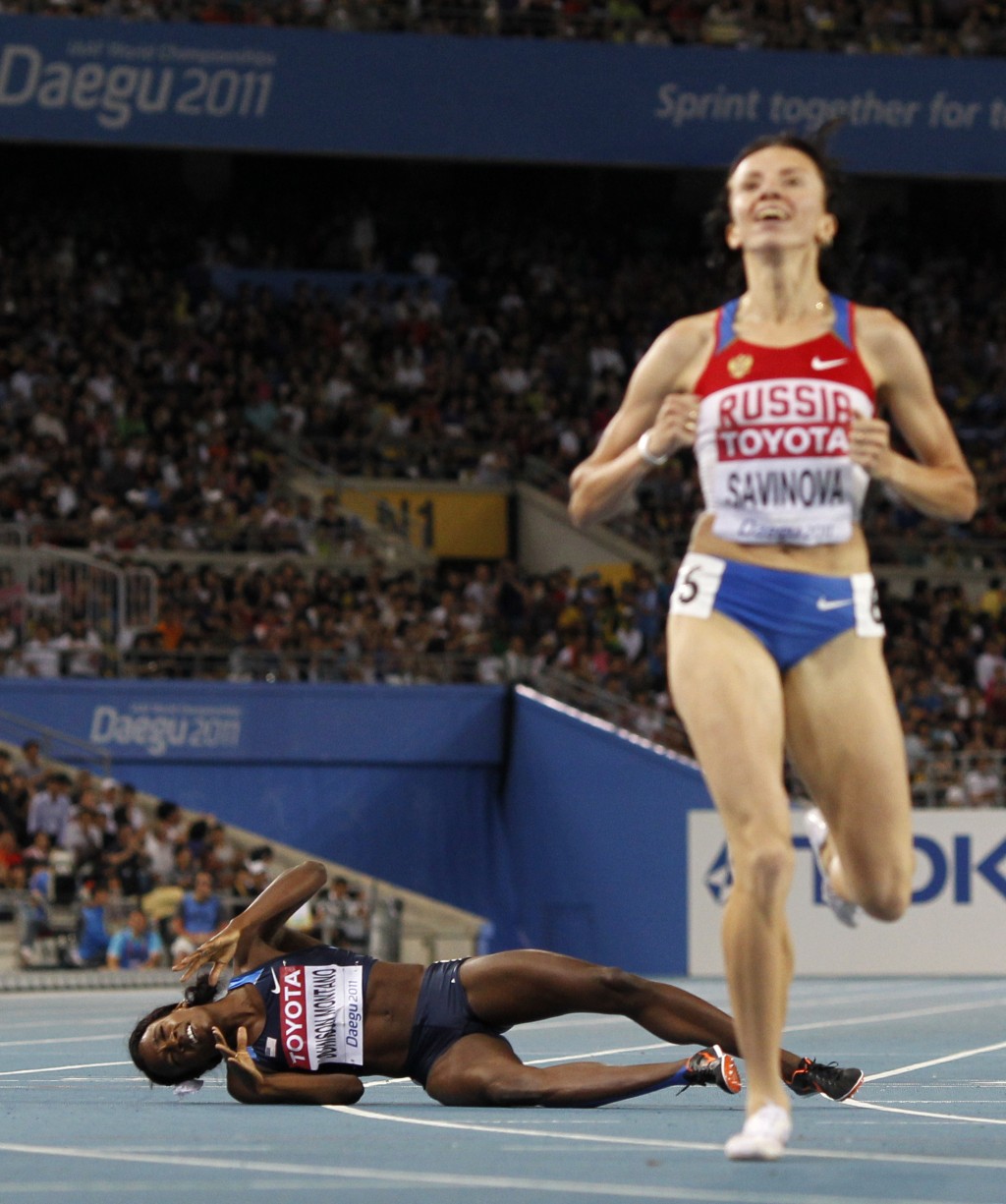 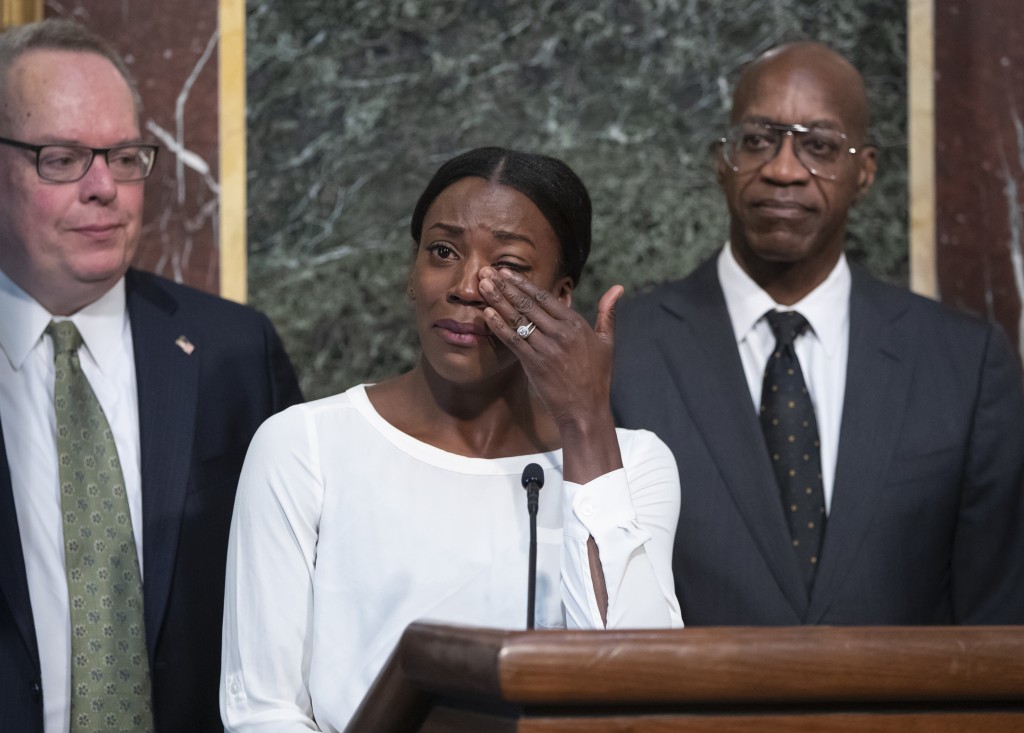 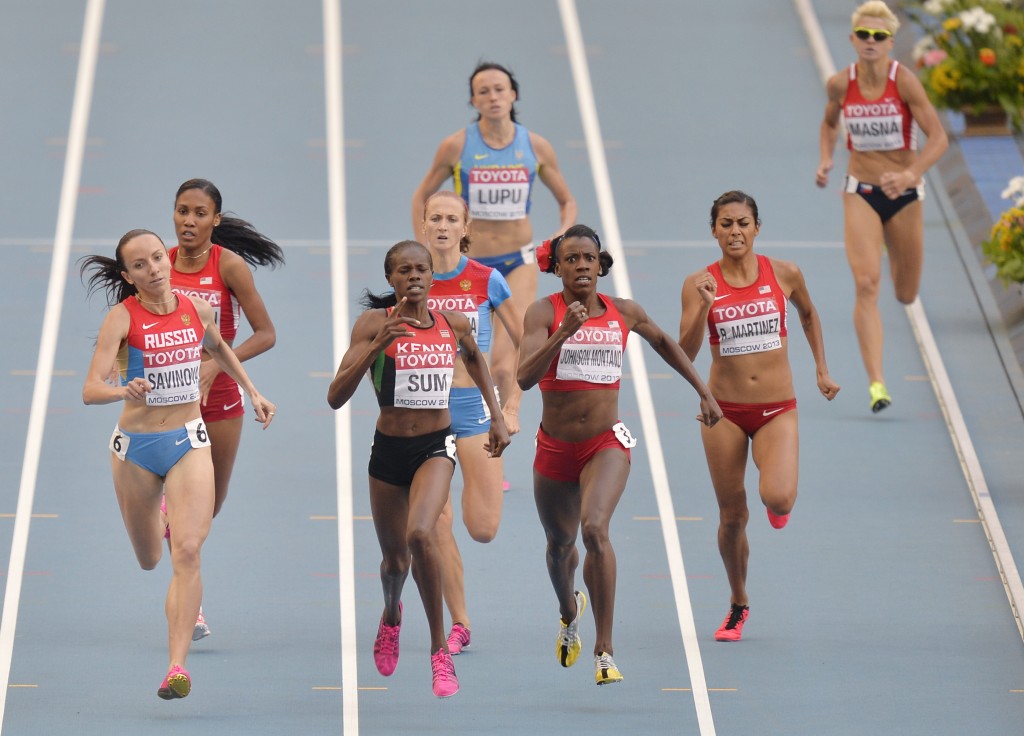 DOHA, Qatar (AP) — Alysia Montano walked off the track with a pair of bronze medals that were placed around her neck several years too late.

Were those tears of joy still drying on her face? Sadness? Frustration?

Yes, all of that.

"I mean, I got two medals in the span of 3 minutes," Montano said Monday evening, after ceremonies held in front of a few hundred fans before action began at the sparsely attended world championships in Qatar. "There's a lot of emptiness and void in that space. I feel relief that the dopers have been eliminated. I don't know what else to say."

The U.S. 800-meter runner who has stood up on behalf of every athlete cheated out of medal by a doper finally got the third-place prizes she was robbed of at two straight worlds, back in 2011 and 2013.

She came to Qatar in part to set an example for her young kids, "to show them strength and perseverance and resilience" any way I could, she said.

She came to right a wrong — a chance she knows full well that hundreds of other cheated athletes will never get to enjoy.

But to say she came to close this chapter — the chapter about the way cheating pervades worldwide sports and corrupts from the bottom to the top — well, that's far from the truth.

"If you want to know the truth, I think the IAAF is just as corrupt as they've always been," Montano said of track's governing body. "They just get to throw things under a rug. And there are many other athletes who, unfortunately, aren't going to get this victory. The IAAF is making it look pretty."

Her summation of track and field, even after a series of reforms designed to rid this sport of cheaters and the leaders who enabled them: "Real athletes, fake events."

One of her issues is that the powers that be still bring home the lion's share of the money from events like these — French investigators are looking into possible corruption in the process the IAAF used to bring these games to the non-track-loving country of Qatar — while athletes fight for scraps. There is no better way to illustrate that than the fact that Montano had to reach into her own pocket to pay for her husband, two kids and her parents to make the trip to receive this honor.

"They were going to pay for one to two nights here, for me to fly all the way to Doha and come celebrate all by myself," said Montano, who is pregnant with her third child. "What kind of invitation was that, to come and celebrate by myself?"

Montano said USA Track and Field came up with $3,000 to help cover some of the expenses and she's planning on fighting to get the rest from the IAAF. Her losses, though, are far more than that. She was denied prize money for winning the bronze medals, plus any endorsement deals that might have come from them. She was denied the celebration at the end of the race, and instead was faced with the heartbreak of finishing fourth both times.

"They say four is the loneliest number in track and field," Montano said. "But I made them fight for stealing from me."

It's a fight that never seems to end.

It was Montano who, earlier this year, started the movement on behalf of female track and field athletes by posting an op-ed video in the New York Times that outlined Nike's longstanding policies of discontinuing payments to athletes it sponsors who become pregnant. Nike ended up changing that policy, and it wasn't lost on Montano that new moms Allyson Felix and Shelly-Ann Fraser-Pryce were the gold-medal headliners Sunday night.

Monday, before the action got going, was Montano's moment — her first chance to step on the podium at a world championships.

She received medals that had previously gone to others because she was beaten by Russian Mariya Savinova, who was later found to have been using performance enhancers. Montano pretty much knew it at the time, but it took a whistleblower, former Russian runner Yulia Stepanova, combined with years of investigations into Russian doping, for this day to come.

Was it everything she and her husband had imagined it would be?

"I was a little bummed," Louis Montano said. "The moment for us was kind of robbed. I remember being there in 2011 in Daegu and the place was packed, and the people were crazy and South Korea was an amazing place."

Montano remembers not being able to hear himself think at that one. At this one, he could hear the fizzle from the small set of fireworks that were set off during the ceremony.

But despite the awkwardness, the cost and the mixed-feelings, Alysia is glad she came here. She no longer feels like her career was a "farce" — the word she used in 2016 after getting tripped up in the home stretch at Olympic trials and having her dreams of competing in an allegedly clean(er) games come to an end.

"I'm happy with my path and everything it brought me, even with the disappointments," Alysia Montano said. "I was going to be the one who was going to fight for us. I'm super grateful, because I know that now I'm making an impact."