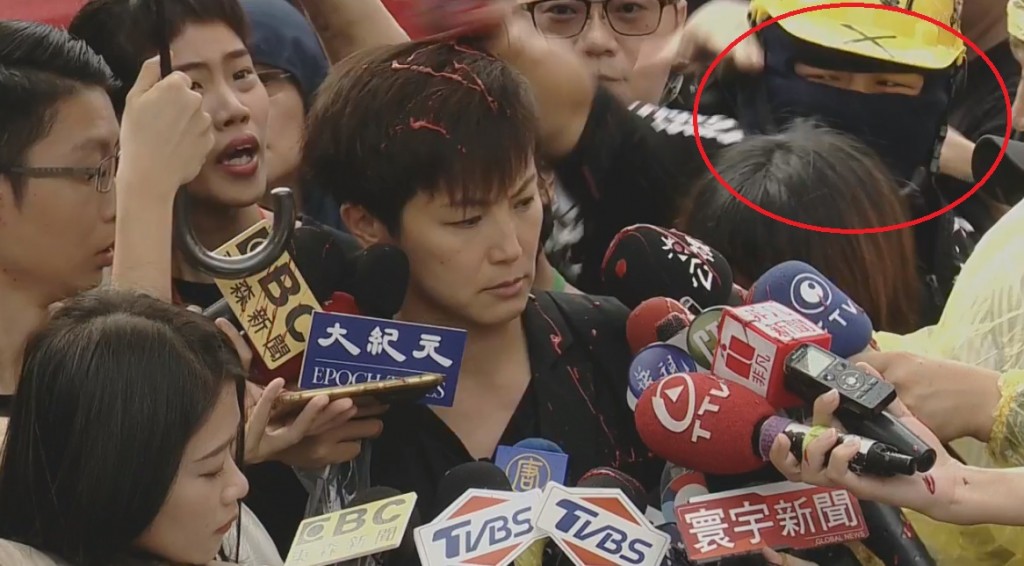 TAIPEI (Taiwan News) — The suspect who allegedly tossed red paint on Hong Kong musician and activist Denise Ho (何韻詩) during a rally against the communist dictatorship of China on Sunday (Sept. 29) has been identified as the chairman of the Chinese Unity Promotion Party (CUPP, 統促黨) led by former gang leader Chang An-le (張安樂), aka the "White Wolf."

In Taipei, people organized a march on Sunday called the "929 March Against Totalitarianism" to show solidarity with the people of Hong Kong in their fight against the communist regime of China. On Sunday at 2:52 p.m. outside Taiwan’s Legislative Yuan, Hong Kong musician and activist Denise Ho (何韻詩) was targeted by an unknown man who doused her with a small can of red paint.

Ho had just begun to give a statement to the press when a masked man, dressed like many protesters in Hong Kong, tossed the paint from behind Ho, splattering the back of her head with bright red paint. The assailant was reportedly surrounded by demonstrators, who blocked his escape from the scene, allowing police officers to seize him. After taking the suspect in for questioning, police identified him as 44-year-old Hu Chih-wei (胡志偉), the chairman of both the CUPP and the Dachen Nostalgia Culture Association (大陳島鄉情文化促進會), reported the Liberty Times. Police also identified a 54-year-old accomplice named Liang Tai-fu (梁太富), a fellow member of the Dachen Nostalgia Culture Association, and took both men into custody.

On Monday morning (Sept. 30), the two suspects were transferred to the Taipei District Prosecutor's office for further questioning. When questioned by reporters as to why he had dumped paint on the Hong Kong activist, Hu replied, "I oppose violent Hong Kong separatists coming to Taiwan. Taiwan needs stability," according to the report.

Police say that Hu had committed a similar politically-motivated assault in the past. While Taiwan Referendum Alliance leader and Free Taiwan Party Chairman Tsai Ting-kuei (蔡丁貴) held a press conference in March of last year to explain the rationale behind dumping paint on Cihu Mausoleum, Hu sprayed hair growth tonic on Tsai. Can of red paint left at the scene. (CNA photo)

After the incident, National Policy Agency Director-General Chen Ja-chin (陳家欽) emphasized that he condemned the violence and that the crime must be severely punished. Chen said that Hu and Liang are suspected of being important cadres of the CUPP and that the Criminal Investigation Bureau and Taipei City Police Department are investigating whether they were incited by others to commit this act, reported the Liberty Times.

The CUPP denied any involvement and said that it was "an individual act" by Hu. Ho (center) after being doused with paint. (CNA photo)

Video of the incident can be seen in this clip uploaded to Hong Kong activist Facebook group The Hong Kong Outlanders: 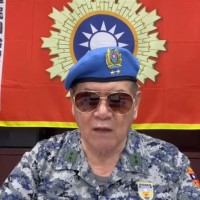 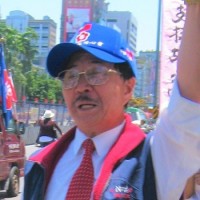