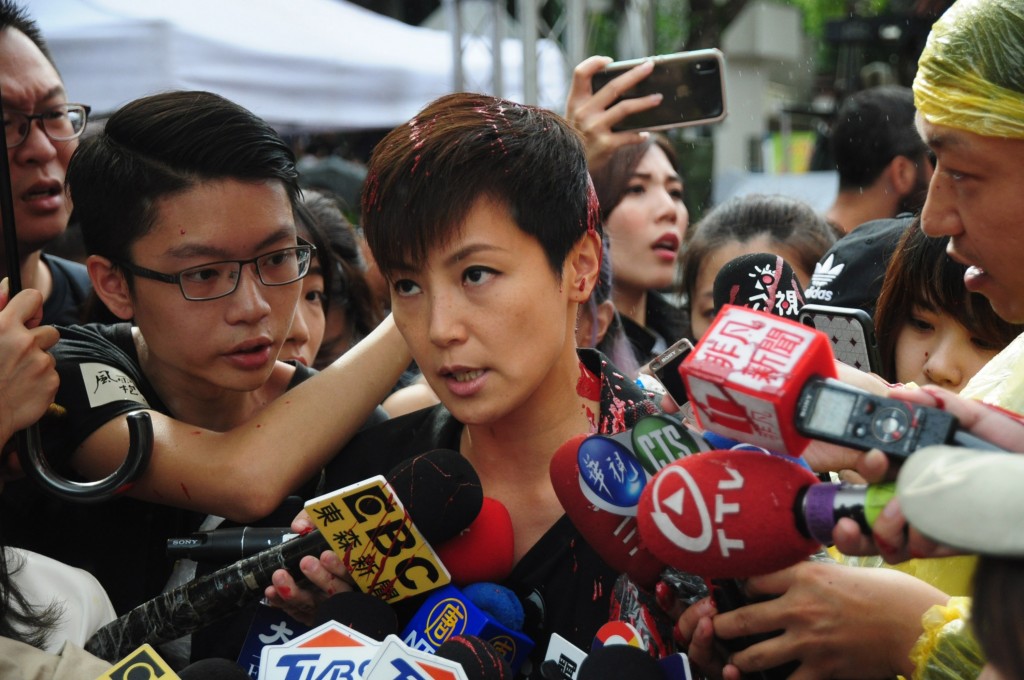 TAIPEI (Taiwan News) – People in Taiwan and Hong Kong joined forces on Sunday (Sept. 29) to advance the cause of liberty and democracy with the “929 March Against Totalitarianism.”

In cities throughout Taiwan, people organized marches to show solidarity with the people of Hong Kong in their fight against the communist dictatorship of China. On Sunday outside Taiwan’s Legislative Yuan, Hong Kong musician and activist Denise Ho (何韻詩) was targeted by an unknown man who doused her with a small can of red paint.

Ho had just begun to give a statement to the press when a masked man, dressed like many protesters in Hong Kong, tossed the paint from behind Ho, splattering the back of her head with bright red paint. Ho, along with journalists and onlookers were stunned as the man turned tail and began to flee the scene, reports CNA. The assailant was reportedly surrounded by demonstrators who blocked his escape from the scene, allowing police officers to seize him. According to reports, the man and one accomplice have been arrested, and one of the people arrested is a 40-year-old man surnamed Hu (胡).

After being doused in the paint, Denise Ho calmly remarked that this was the same kind of intimidation that Hong Kong activists deal with on a daily basis. “However, Hong Kong people will never be cowed by such acts,” said Ho.

The duo that were arrested may be charged with disturbing the peace under Taiwan’s Social Order Maintenance Act, reports UDN. The incident occurred shortly after 2:00 p.m. as protesters and police officers were preparing for the Taipei march to begin at 3:00 p.m. The event in Taipei is expected to last until 8:30 p.m.