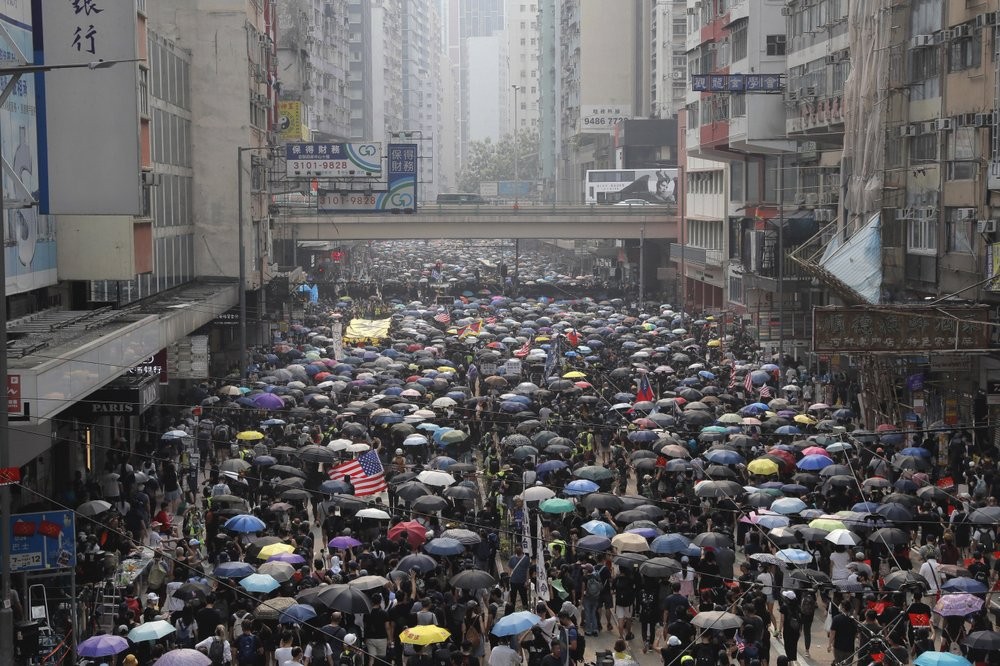 The Latest on protests in Hong Kong (all times local):

Riot police in Hong Kong have fired a water cannon and more rounds of tear gas to block protesters from advancing toward the government office complex in the city’s downtown area.

A march by thousands of people who defied a police ban appeared to have fizzled Sunday after riot police used tear gas to disperse the crowd at several spots as they headed toward government headquarters.

At another street nearby, dozens of black-clad protesters wearing gas masks used their umbrellas to form a shield as they stayed a few hundred meters away from a police cordon. Some picked up tear gas canisters shot at them and threw them back toward the police officers. Thousands of protesters have regrouped after police fired tear gas at them and are marching along a thoroughfare in downtown Hong Kong, defying a police ban.

The protesters, some clad in black and carrying umbrellas and pro-democracy posters, are signing songs and chanting “Stand with Hong Kong, fight for freedom” as they took over a stretch of a road over 1 kilometer (1.6 mile) long and heading toward the government office complex.

Many fled earlier after riot police fired multiple rounds of tear gas to disperse a large crowd that amassed at the Causeway Bay shopping area. But protesters returned and started their march shortly after. Some are carrying American and British flags.

Some of them sprayed graffiti along walls and smashed windows at a subway exit. A police helicopter is hovering above. Riot police have thrown tear gas and cordoned off part of a street at Hong Kong’s Causeway Bay shopping belt after a large crowd started to amass for an anti-China rally ahead of Tuesday’s National Day celebrations.

Protesters chanted slogans and heckled police as they were pushed back behind a police line. The atmosphere is tense as police warned the crowd they were taking part in an illegal assembly. Officers fired tear gas canisters after some protesters threw bottles and other objects in their direction.

Police earlier searched some protesters and several people were detained. The crowd has swelled to more than 1,000 people, with many spilling into adjacent streets.

Sunday’s gathering, a continuation of months-long protests for greater democracy, is part of global “anti-totalitarianism” rallies planned in over 60 cities worldwide to denounce “Chinese tyranny.” Hundreds of pro-Beijing supporters in Hong Kong sang the Chinese national anthem and waved red flags ahead of China’s National Day to counter pro-democracy protests viewed as a challenge to Beijing’s rule.

Sunday’s show of support for Beijing comes a day after fresh violence in the semi-autonomous Chinese territory, with police firing tear gas and water cannons after protesters threw bricks and firebombs at government buildings following a massive rally.

The protests began in June over a now-shelved extradition bill but have snowballed into demands for democratic reforms.

Organizer Innes Tang says Sunday’s event is aimed at backing Chinese sovereignty and calling for peaceful celebrations amid plans for a major protest march that could mar Tuesday’s festivities for the 70th anniversary of the Communist Party taking power. 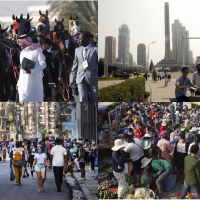