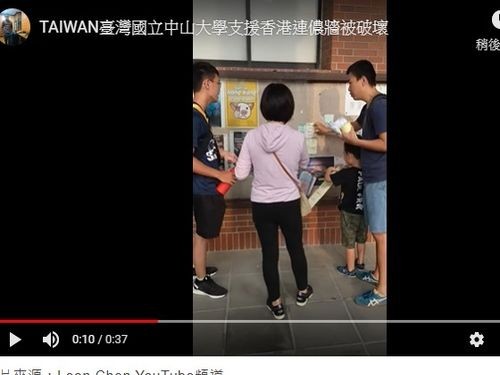 A Chinese family is under investigation for allegedly vandalizing a wall on the National Sun Yat-sen University campus in Kaohsiung on which messages supporting Hong Kong's democratic movement are posted, police said Saturday.

The police said they found the Chinese couple and their young child in Kenting, southern Taiwan.

They were found a day earlier at the university ripping down notes carrying messages in support of Hong Kong's ongoing protests, which began in late June in opposition to a proposed bill that would have allowed the extradition of criminal suspects to China for trial, the police said.

Although they were told by students to stop, they continued, an action described by the university as constituting vandalism.

The school's student union, which oversees the information posted on the wall, has filed a lawsuit against the vandals, according to the university.

The union also launched an event asking students to re-post their support for Hong Kong through notes or pictures along the wall of the Sizihwan Tunnel, which links the school and downtown Kaohsiung.