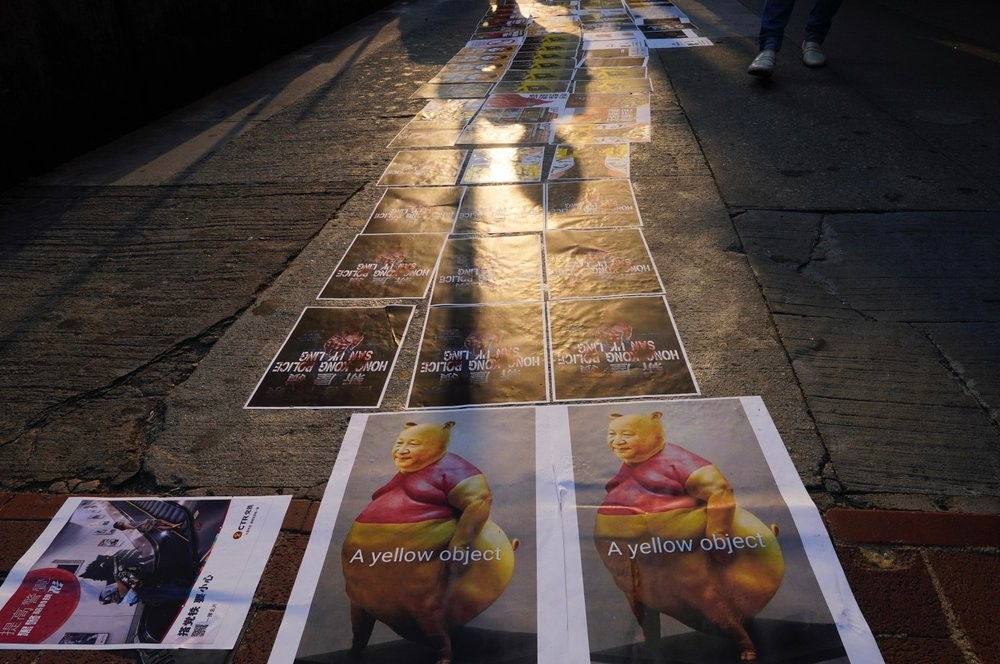 HONG KONG (AP) — Thousands of people gathered Saturday for a rally in downtown Hong Kong, belting out songs, speeches and slogans to mark the fifth anniversary of the start of the 2014 Umbrella protest movement that called for democratic reforms in the semiautonomous Chinese territory.

The rally at Tamar Park by the Civil Human Rights Front was approved by police but security was tight, with barriers blocking access to government offices and the Legislative Council building, which was stormed by protesters in July.

Demonstrators unfurled a big banner that read “We are back” on a footbridge to the government office. Walls along a staircase leading to the bridge were filled with posters in a throwback to 2014, when protesters occupied key thoroughfares in the same area for 79 days but failed to win any government concessions.

Just before Saturday’s rally started, a small group of black-clad protesters wearing goggles and masks attempted to scale barricades outside the government offices, prompting riot police behind the barriers to fire pepper spray.

The protesters retreated but returned, heckling police and thumping metal fencing. Police used pepper spray again, and the scene repeated several times. Some journalists were hit by the spray.

Earlier Saturday, activist Joshua Wong — who played a key role as a youth leader in the 2014 protests — announced plans to contest district council elections in November. Wong, 22, said the vote is crucial to send a message to Beijing that the people are more determined than ever to win the battle for more rights.

“Five years ago, we claimed that we will be back and now we are back with even stronger determination,” he told a news conference. “The battle ahead is the battle for our home and our homeland.”

Wong, who has been arrested and jailed repeatedly, said he is aware that he could be disqualified. Members of the Demosisto party that he co-founded in 2016 have in the past been disqualified from serving and running for office because they advocated self-determination.

“If they disqualify me, it will just generate more and more momentum ... they will pay the price,” he said.

Wong is out on bail after he was rearrested with several other people last month and charged with organizing an illegal rally. It didn’t stop him from going to the U.S., Germany and Taiwan to drum up support for the current protest movement, which started in June over an extradition bill but has since snowballed into an anti-China campaign. The now-shelved bill, which would have sent some criminal suspects for trial in mainland China, is seen as a jarring example of China’s intrusion into the city’s autonomy.

Wong’s activities have made him a target of the Chinese government, which has used him to accuse foreign powers of colluding with anti-China separatists to foment unrest. Wong said that the government tried to frame prominent activists such as himself as a warning to other protesters, but that it would fail because the current movement has no centralized figureheads.

Apart from Saturday’s rally in the city center, protesters are also planning global “anti-totalitarianism” rallies on Sunday in Hong Kong and over 60 other cities worldwide to denounce what they called “Chinese tyranny.”

But the biggest worry for the government is on Tuesday. Protesters plan a major march downtown, sparking fears of a bloody showdown that could embarrass China’s ruling Communist Party as it marks its 70th year in power with grand festivities in Beijing. Pro-Beijing groups have also vowed to come out.

Police have banned the march, but protesters have in the past turned up anyway. Hong Kong’s government has toned down National Day celebrations, canceling an annual firework display and moving a reception indoors.

Separately, American academic Dan Garrett, who testified at a U.S. congressional hearing with Wong on Sept. 18, said Saturday that he was denied entry into Hong Kong on Thursday due to “unspecified immigration reasons.”

He tweeted that it was the first time he was barred after having visited and lived in Hong Kong for two decades.

Garrett and other speakers spoke about the weakening of Hong Kong’s autonomy as some U.S. congressmen sought to push through a bill to support the democracy movement.