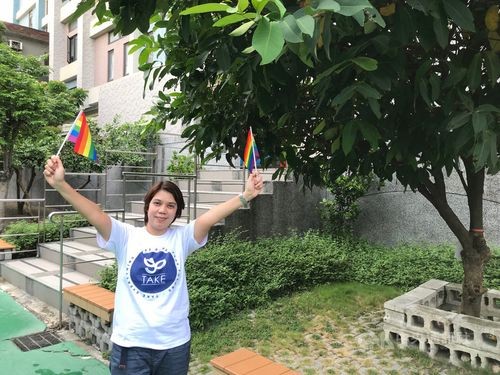 Babaran will be presented with the Choice Award at the 6th Taiwan Literature Award for Migrants award ceremony for a poem titled "Kapirasong Papel," which is written from a man's perspective about facing his wife who has been having an affair while working abroad.

The inspiration for "Kapirasong Papel" came about one day when she was in her dormitory and heard a woman scream at her husband on the telephone because he was having an affair while the woman was working abroad in Taiwan, Babaran said.

But when she started composing the article, she changed the story to the wife committing the affair while overseas, while the husband was at home looking after their family and children, Babaran said.

Babaran said she got the inspiration from her father, who did not betray the marriage and instead concentrated on taking care of the children while her mother was working overseas.

The part in "Kapirasong Papel" that touched her the most was that when the husband discovers his wife's affair, he is on the verge of losing control, but eventually calms down when he hears his child's voice, Babaran said.

Babaran, who lives in Taoyuan, works in a semiconductor factory and has been in Taiwan for 12 years.

Prior to this year's award, Babaran won the Jury Award at the 5th Taiwan Literature Award for Migrants in 2018 for an article titled "Latay sa Laman," in which she expresses her love for her father.

The award ceremony for the 6th Taiwan Literature Award for Migrants will be held Sunday at the Alishan National Forest Recreation Area in Chiayi County.

The awards saw a total of 680 submissions this year and had a total of eight prize winners in nine categories. (By Chen Cheng-wei and William Yen)