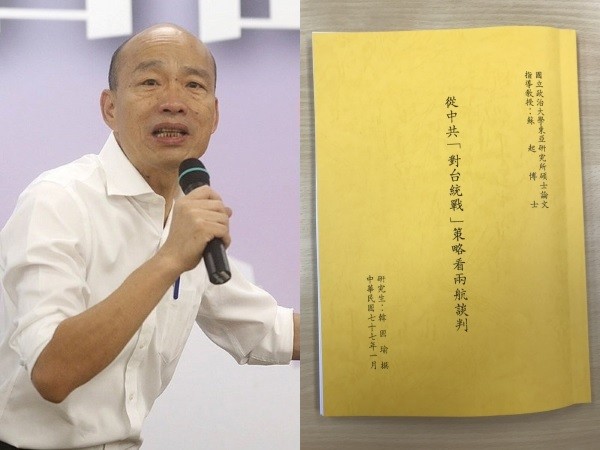 TAIPEI (Taiwan News) — The more than 30-year-old master's thesis of itinerant Kaohsiung Mayor and Kuomintang (KMT) presidential candidate Han Kuo-yu (韓國瑜) brings up the issue of extraditing Hong Kong citizens to China and is surprisingly critical of China's plans to annex Taiwan given his recent cozy relations with the communist regime.

As scrutiny continues over President Tsai Ing-wen's (蔡英文) Ph.D. dissertation from the London School of Economics and Political Science (LSE), the Taiwan Association of University Professors (TAUP) on Thursday (Sept. 26) said that Han's master's thesis was highly critical of China's strategy to annex Taiwan. In his dissertation, the young Han also asserted that applying China's "one country, two systems" framework in Taiwan would be unconstitutional.

Weng said that Han's 99-page thesis makes the case that implementing China's "one country, two systems" model is unconstitutional and would lead to conflict within the judicial system, reported Storm Media. Han's thesis also quotes the viewpoint of Hong Kong scholar Weng Sung-jan (翁松燃), pointing out that "one country, two systems" would be implemented in Hong Kong only because two sets of laws were soon going to be in place with the city's handover to China. Han in his 20s. (Photo from Han Kuo-yu's campaign office)

Ironically, in light of this year's anti-extradition protests in Hong Kong, Han quoted the Hong Kong researcher as asking "If Hong Kong people commit crimes in China and return to Hong Kong, will they be extradited to China?" Han wrote that this was a fair criticism that "cut to the core of the matter," according to the report.

Hsieh pointed out that Han's paper mentioned that China's ultimate goal is to make Taiwan a locally governed entity under the communist country, reported Storm Media. Even more ironically, Han warns readers that Taiwan should be careful about signing a peace agreement with China, something he appears ready to embrace 30 years later as a KMT presidential candidate.

In the thesis, Han advises Taiwan to beware of a China that is "smiling on the surface but hiding a spiked club behind its back." Hsieh said she wished the Han from 30 years ago could travel through time and space and tell the Kaohsiung mayor what he should do now.