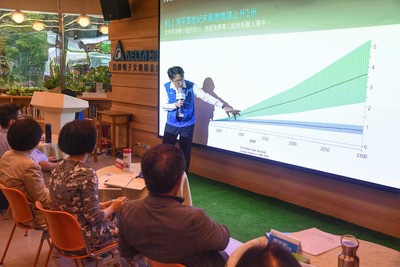 Local scholars on Thursday urged the government to adopt further measures to address climate change, while recognizing that Taiwan has proved itself adept at dealing with climate change-driven natural disasters.

The salon presented a report titled "The Ocean and Cryosphere in a Changing Climate," released by the Intergovernmental Panel on Climate Change under the United Nations Wednesday, in Taiwan's environmental context.

Taiwan responds to natural disasters quite well because the island has, over the years, faced more devastating disasters than most other countries, Tung said.

To elaborate on how climate change has impacted Taiwan for many years, the professor cited Typhoon Nari which flooded Taipei in 2001, adding that the city suffered from a drought the following year, a combination of events that happens once every 10,000 years.

In 2018, Zengwen Reservoir in southern Chiayi County suffered from a lack of water, but the south of Taiwan was devastated by flooding later that year, Tung said.

"It is both fortunate and unfortunate that Taiwan has had to deal with so many disasters brought by climate change and gained experience at an early stage," Tung said.

However, Taiwan also relies heavily on imports of food and energy and so needs to prepare for a more dire situation because climate change will affect the island's maritime and air transportation, the environmental engineering professor added.

Chen also said at the salon that the government must spare no expense in seeking to reduce emissions of carbon dioxide.

As a specialist in marine ecology, Chen said the government needs to protect the algal reef off the coast of Taoyuan because if well preserved it could prove extremely useful at absorbing CO2.