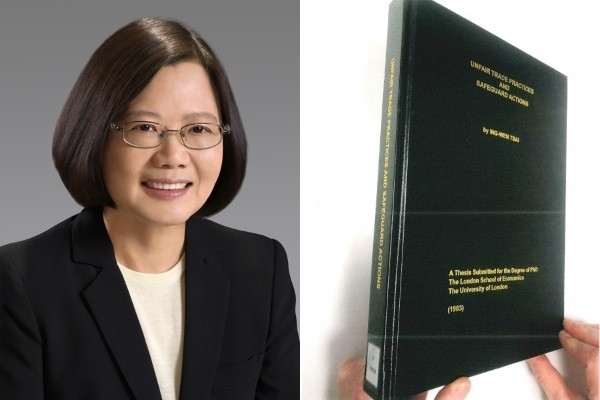 TAIPEI (Taiwan News) — Despite ample proof of its veracity, over 50 percent of respondents said that if Taiwan President Tsai Ing-wen's (蔡英文) Ph.D. dissertation from the London School of Economics and Political Science (LSE) was found to be fake, it would be a "serious matter," in the latest poll by the Taiwan Public Opinion Foundation (TPOF, 台灣民意基金會).

When broken down by party affiliation, 31 percent of Democratic Progressive Party (DPP) supporters said problems with Tsai's LSE degree would be serious, 54 percent of respondents not affiliated with a party considered it serious, and 74 percent of Kuomintang (KMT) backers thought it serious. Polling expert Ying-lung You (游盈隆) said the results showed that affiliation to a particular political party significantly affects the respondents' judgment on this matter, reported Storm Media.

When asked what they thought of the allegations surrounding Tsai's LSE Ph.D. dissertation, 31.9 percent of respondents thought there was no problem, while 17.8 percent did not believe the allegations at all. Meanwhile, a total of 15.3 percent believed there might be some problem, 9.3 percent were convinced, and 13 percent had no opinion.

Despite these concerns about her Ph.D., 56 percent of respondents said they would vote for Tsai in the presidential election as opposed to only 30.9 percent opting for KMT candidate Han Kuo-yu (韓國瑜). The gap between the two contenders has never been larger since the two main parties selected them to run in the Jan. 11, 2020 election, according to You.

In addition to repeated confirmation by both Tsai and LSE that her Ph.D. is authentic, Tsai donated a personal copy of her dissertation to the LSE Library in June and posted a picture of her LSE degree certificate on Facebook in August. On Monday (Sept. 23), Taiwan’s Presidential Office made Tsai's original doctoral dissertation viewable by the public at the National Central Library. The poll was conducted by Focus Survey Research on September 18-19, receiving 1,080 valid responses with a margin of error of 2.98 percent.