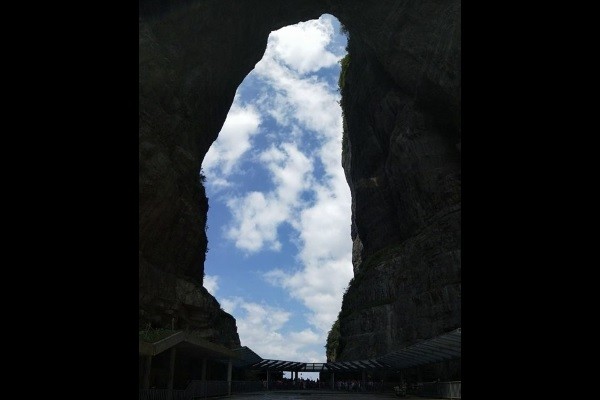 TAIPEI (Taiwan News) — Given the simmering cross-strait tensions of the past few years, Taiwanese netizens got a kick out of a cave entrance in China whose shape bears a startling similarity to Taiwan.

During a recent visit to a cave in Tianmen Mountain National Forest Park in Hunan province's Zhangjiajie, a Taiwanese tourist noticed that when viewed from a certain angle, the cave's entrance bears an amazing resemblance to Taiwan. Once photos of the entrance were shared on social media in Taiwan, netizens joked that it was "Taiwan independence in China" and "This place is going to be blown up."

Tianmen Cave is the highest-elevation natural water-eroded arch in the world. According to historical accounts, the cave suddenly opened up in 263 A.D. and was given the name "Tianmen" (Heavenly Gate) by Wu Emperor Sun Xiu, as he considered it an auspicious sign.

The arch stands an impressive 131.5 meters high, is 57 meters wide, and is 60 meters deep. Once the image was posted on the Facebook page Baofei Commune (爆廢公社) on Sunday (Sept. 22), many Taiwanese netizens poked fun at the inevitably exaggerated response by Chinese trolls:

"The glass hearts will be coming shortly."

"It will probably be demolished in a few days."

"Sitting and waiting for Tianmen Cave to be sealed."

"The symbol of freedom."

"It will be blasted to take the shape of an old hen [China's shape]."

"In keeping with the style of the Chinese Communist Party, the whole mountain will be blown to smithereens."