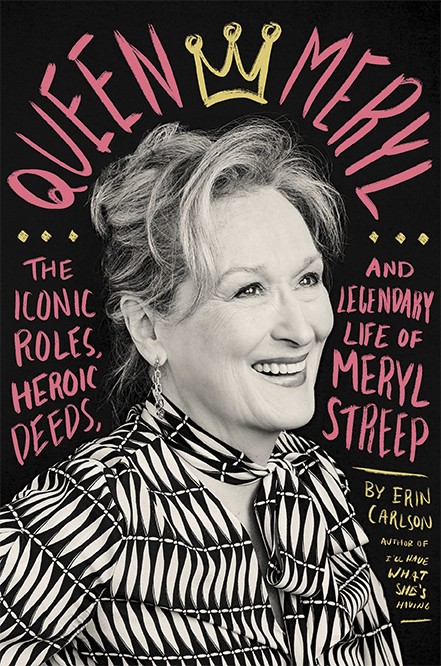 The sort of book that would make its subject blush and her fans gush, "Queen Meryl" affirms Meryl Streep as the greatest actress of her generation — maybe of either gender and of any generation. That she's not one to take herself so seriously as to believe there is anything heroic or legendary about her life is another reason to celebrate her.

It's not just the seemingly countless, varied roles or numerous honors, including three Oscars. As author Erin Carlson states, "Most of all, she represents a meaningful goal for women: the courage to shed fear and inhibition and live a big, bold, authentic life."

Streep created her first role in high school when she tamped down a naturally bossy, opinionated and loud personality to become more popular among the girls and with the boys. Her reward then was the crown of homecoming queen. At Vassar and Yale the real Meryl emerged, now impressing her drama teachers and classmates with her excellence at performance.

Theater roles led to her first film, 1977's "Julia" with Jane Fonda, and the Emmy-winning miniseries "Holocaust" the next year. Prominent supporting roles in back-to-back winners of the Oscar for best picture — "The Deer Hunter" in 1978 and "Kramer vs. Kramer" in 1979 — signaled a talent that could carry a movie on its own steam. She became the go-to interpreter of complex women, whether fragile or strong, adorable or horrible, funny or sad.

Carlson provides a serious but playful account of Streep's career and enough private moments to back up the actress' reputation as a generous colleague and a devoted wife and mother of four. Managing to have a life beyond stage and screen while conquering both venues points to her indefatigable nature and the courage to take roles that, on their face, don't seem right for her.

Several come to mind: a Polish survivor of a Nazi death camp in "Sophie's Choice"; an Oklahoma nuclear worker in "Silkwood"; the Danish author Karen Blixen in "Out of Africa"; an Italian war bride in "The Bridges of Madison County"; British Prime Minister Margaret Thatcher in "The Iron Lady"; and a songbird in the musical "Mama Mia!" Time and again, she makes a role her own.

Only those who follow Streep closely may know that she is an outspoken liberal on many public issues — among them climate change, #MeToo and Donald Trump — because she doesn't demand center stage to be involved. Trump's declaration that she is "one of the most overrated actresses in Hollywood" is hardly the worst review she's received, but it might be one that she's proud of.

Biographies of stumble-free high achievers are notoriously dull if informative. To put some spring in her research, Carlson writes in the breezy tone often found in celebrity profiles. She can't tap the drama overflowing in the lives of film's golden age actresses — Bette Davis and Joan Crawford come to mind — who lived large and played out their triumphs and tragedies in public. Not only is Streep private, her story lacks multiple husbands, on-set romances, scornful children and bitter professional feuds.

It's all about the work and the life beyond, a refreshing break from angst-ridden Hollywood backstories. Now 70, Streep still has the power to make us believe and question and feel, and the joy she has drawn from her efforts to blaze a singular path shines through in "Queen Meryl."