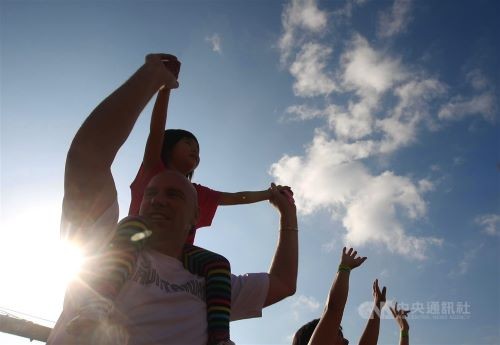 With severe Tropical Storm Tapah moving away from Taiwan, rain is expected to subside in the northern parts of the country on Sunday and the weather will likely turn stable, with temperatures to rise, according to the Central Weather Bureau (CWB).

As Tapah moves toward Japan and South Korea, most of the country will see sunny to partly cloudy skies on Sunday, with afternoon showers forecast in the mountainous areas, the CWB said.

It added that partly cloudy skies are expected in north and northeastern Taiwan, with isolated showers in mountainous areas of northern Taiwan, eastern Taiwan and southeastern Hengchun Peninsula.

Temperatures are expected to rise from a day earlier with daytime highs forecast to range between 28-30 degrees Celsius on Sunday in north and eastern Taiwan, and 32 degrees in central and southern parts of the island. Lows are forecast to range from 20-24 degrees, according to the forecast.

Due to the tropical storm's effects, big waves will be seen in coastal areas, in particular in Keelung and eastern Taiwan, including offshore Green Island and Orchid Island, as well as the HengchunPeninsula, the CWB said.

Meanwhile, the air quality in parts of central and southern Taiwan was generally rated "unhealthy" Sunday because of a lack of wind to disperse atmospheric pollutants, according to the Environmental Protection Administration's (EPA) Taiwan Air Quality Monitoring Network.

The Air Quality Index (AQI) has flashed an orange alert, meaning unhealthy air for sensitive groups, in Yunlin, Chiayi, Nantou, Pingtung, offshore Kinmen and Penghu counties and Kaohsiung City, according to the EPA.