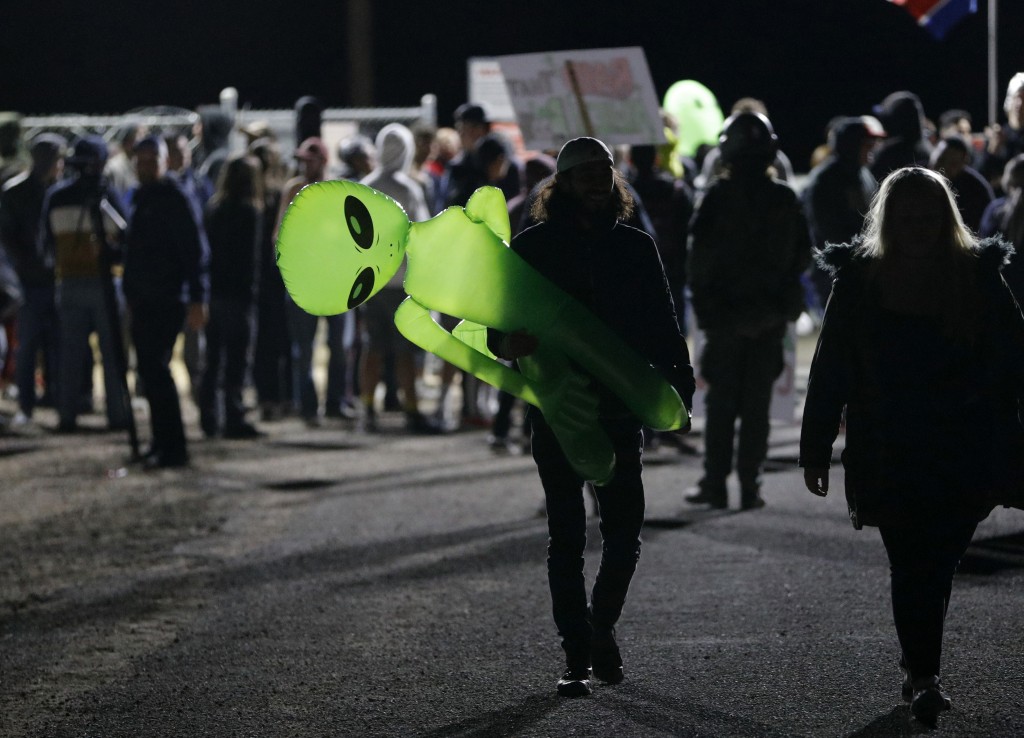 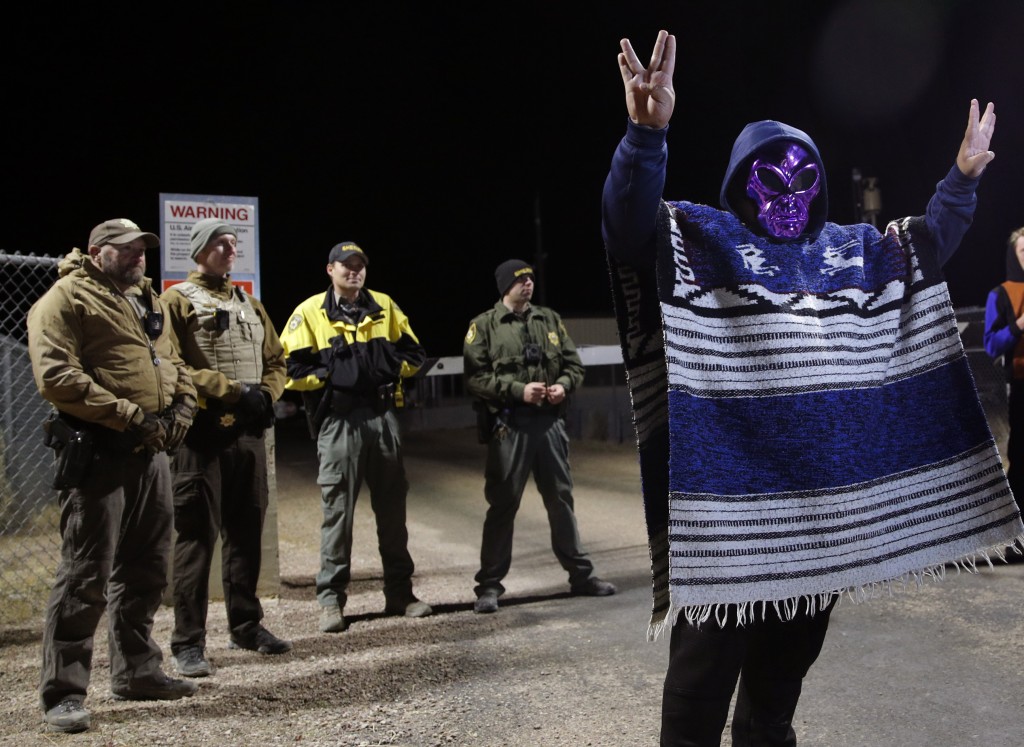 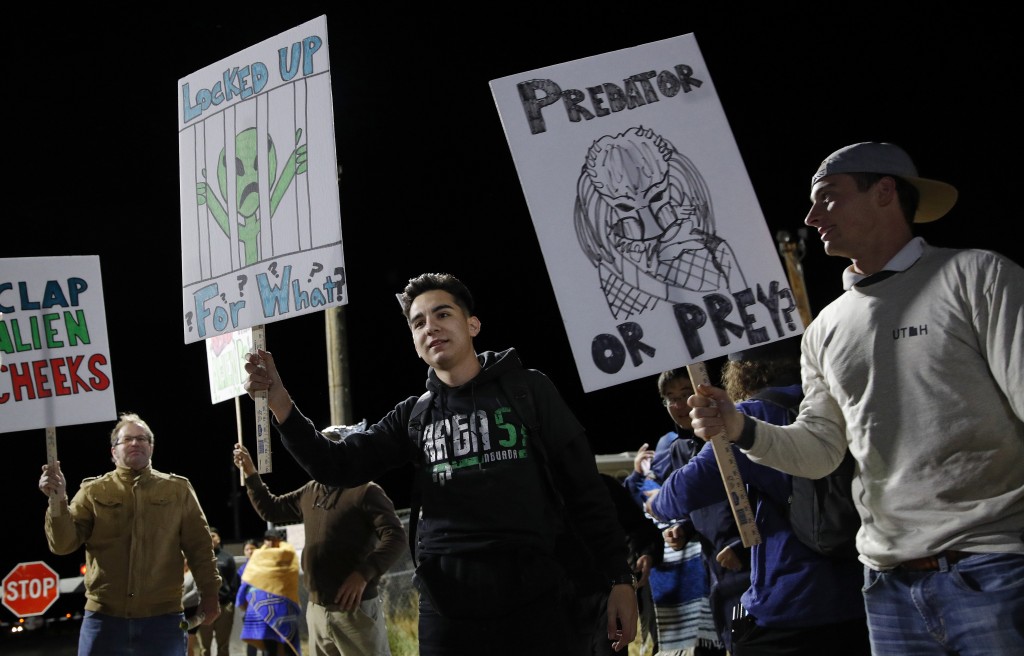 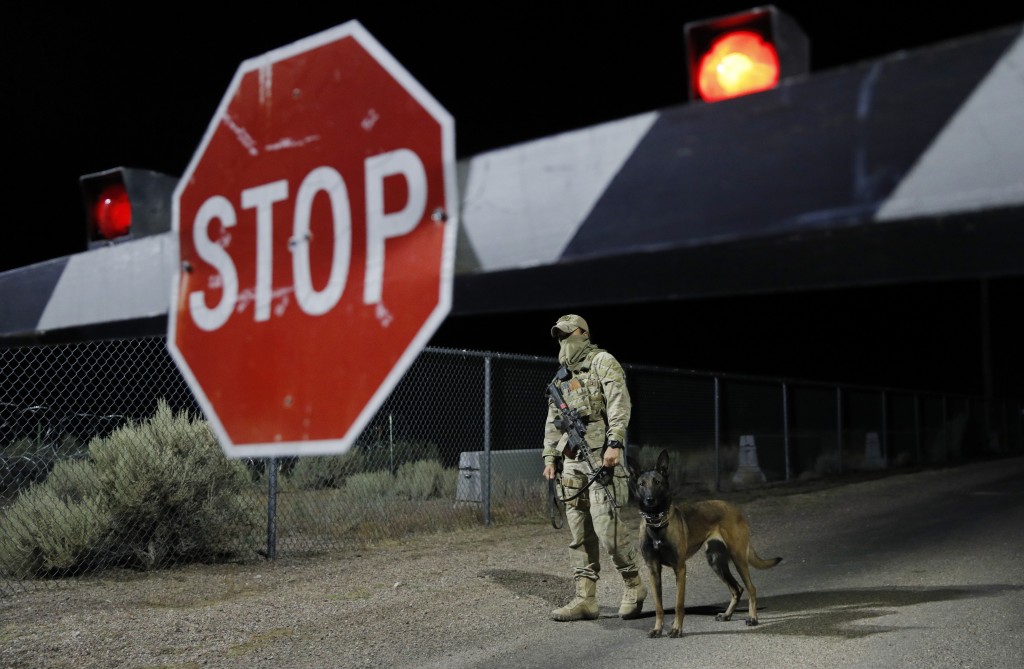 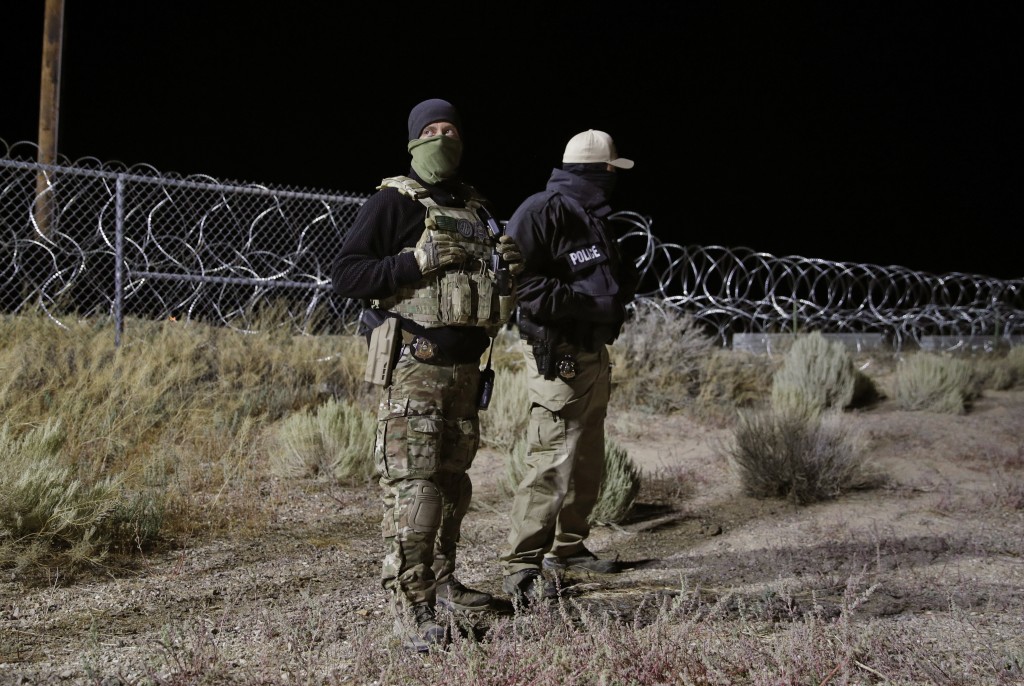 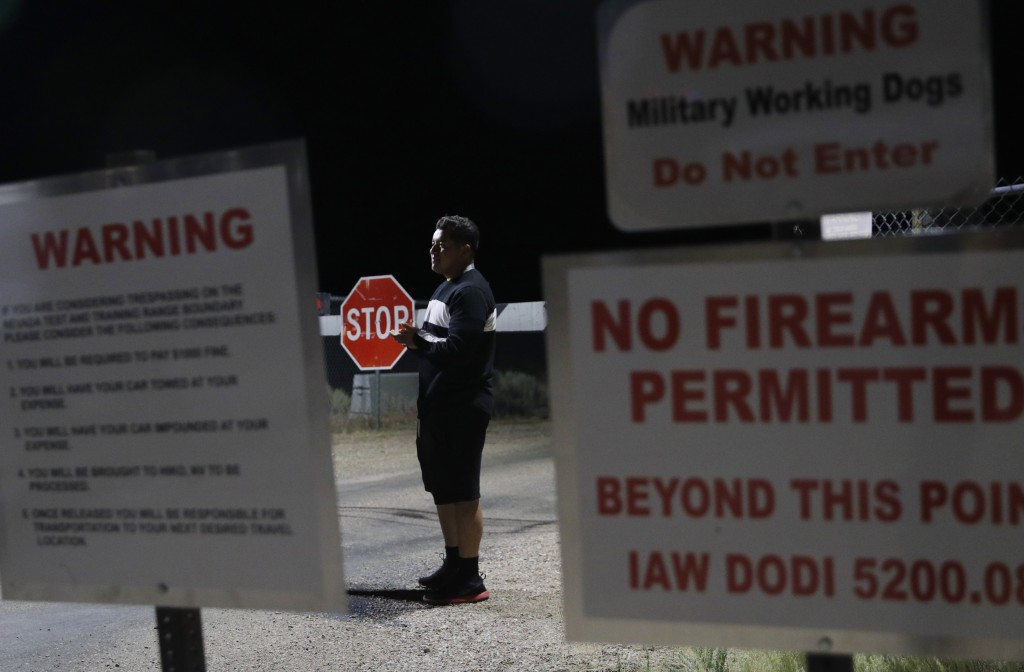 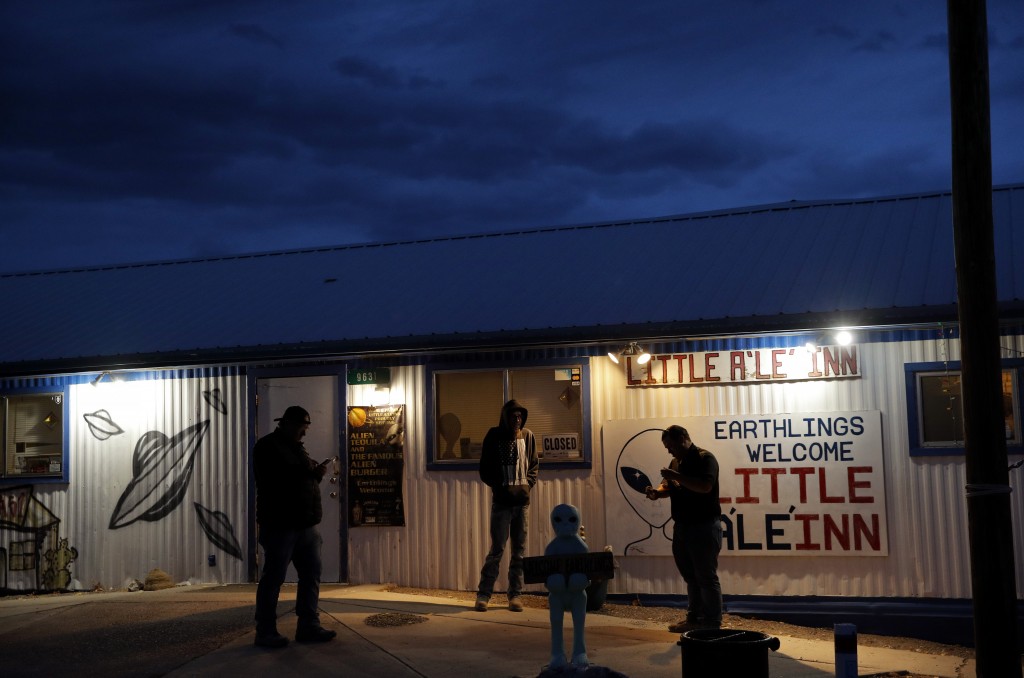 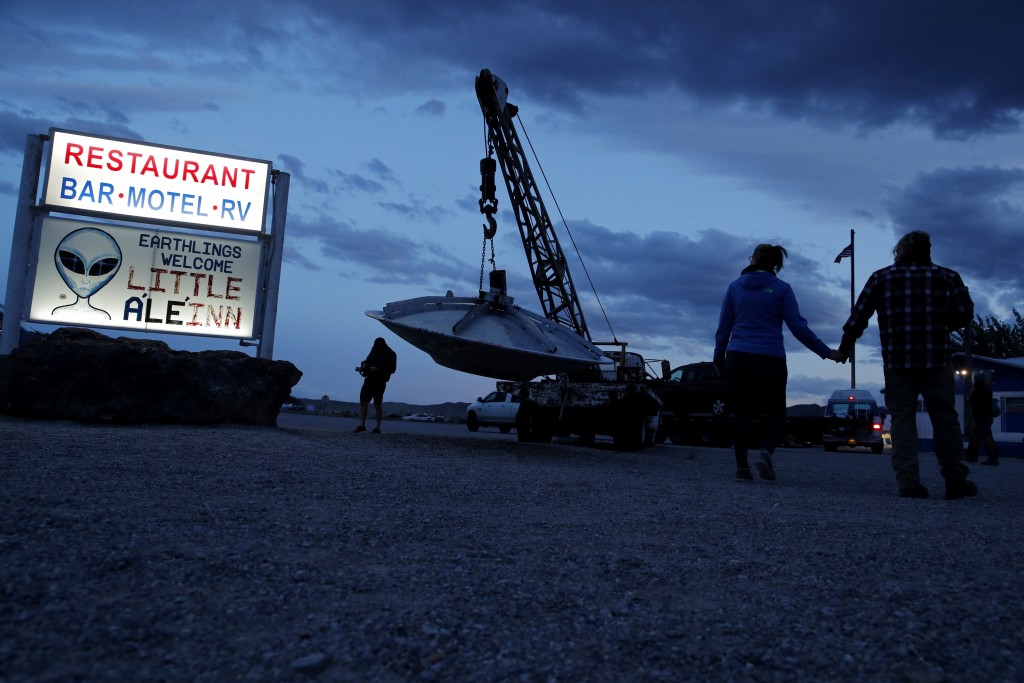 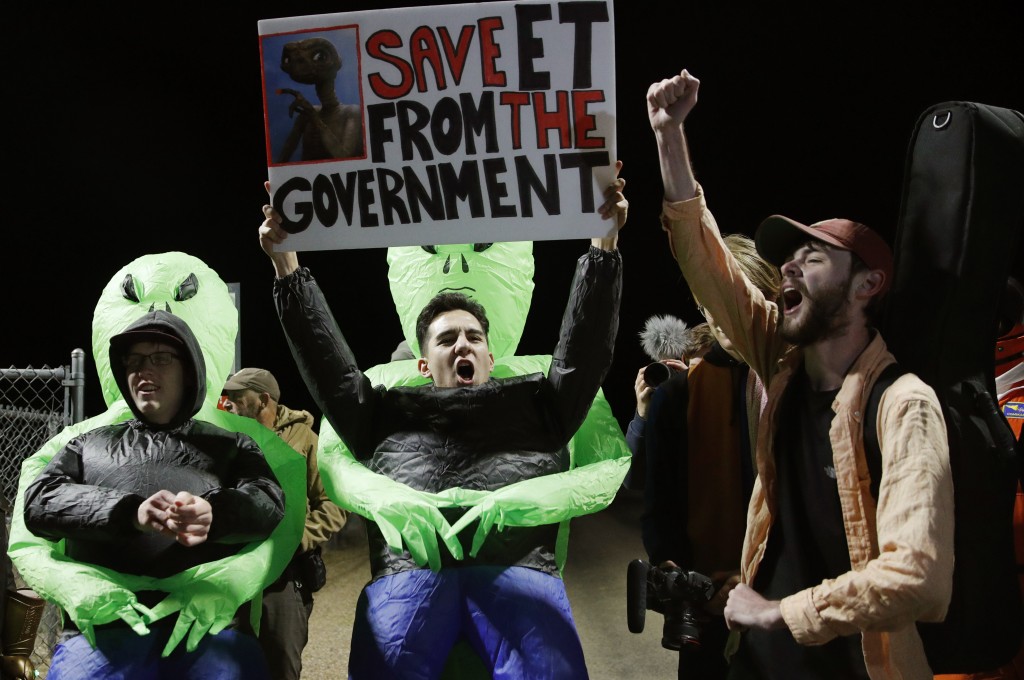 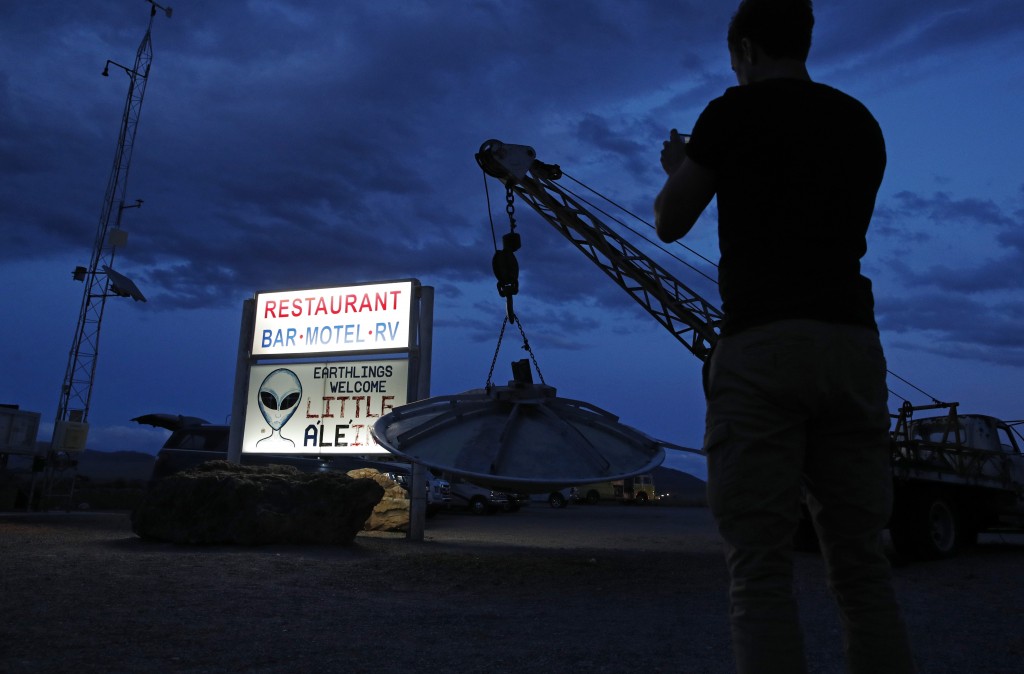 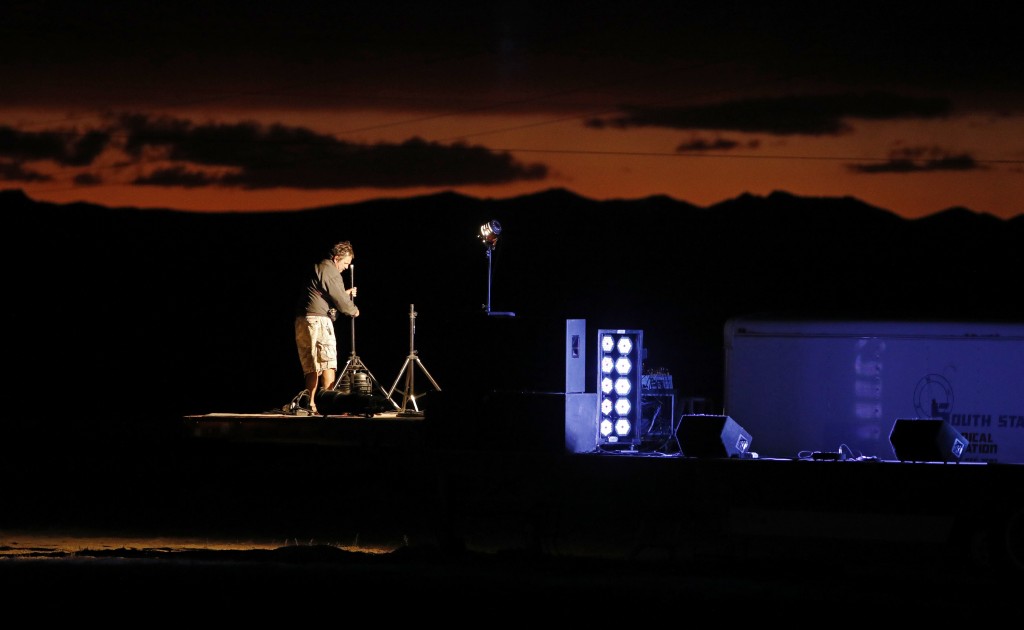 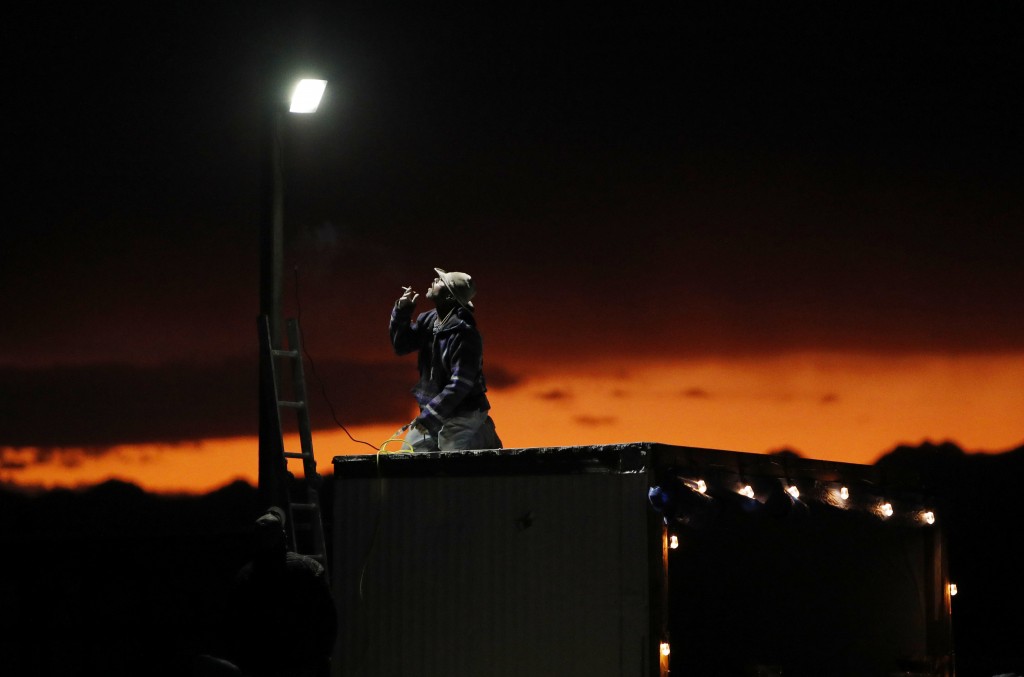 HIKO, Nev. (AP) — Hundreds of curious Earthlings from around the world traveled to the secret Area 51 military base in the Nevada desert after seeing an internet hoax dubbed "Storm Area 51."

About 100 made it all the way to the gates of the remote site that has long been the focus of UFO conspiracy theories.

A Canadian was cited for indecent exposure, but nobody broke down the gates in search of three-eyed aliens and no UFOs appeared in the sky.

It wasn't long before the revelers peacefully rejoined 2,000 other people at alien-themed festivals in the tiny towns of Rachel and Hiko.

As he walked away from one of the gates, 25-year-old Cyril Soudant of Lille, France, said he was disappointed at how few people were at the event.

He took video for his YouTube channel and said he would wait until Friday night to make his final assessment on the experience.

"If we get together, have some music, have some beers, that would be a success," Soudant said.

Among the revelers was Jade Gore, who quit her job at a Dairy Queen in Worthington, Minnesota, and drove to Nevada with Tracy Ferguson. They wrote "Area 51 bound" and "Comin 4 Dem Alien Cheeks" in green paint on the windows of their car.

Ferguson, a truck driver, said they decided to make the trip after seeing the social media post in June calling for people to converge on the remote U.S. Air Force test site.

"It started as a joke and now people are getting to know each other," said Ferguson, 23, of Sioux Falls, South Dakota.

Authorities expected more people to arrive throughout the day for the festivals offering music and other alien-related activities.

They were sternly discouraged by the military and other law enforcement from acting on the internet hoax that joking said, "They can't stop all of us. Let's see them aliens."

A music group called Wily Savage erected a stage Thursday near the Little A'Le'Inn in Rachel and began playing after dark for several hundred campers who braved temperatures that dropped to about 45 degrees (7 Celsius).

"It started as a joke, but it's not a joke for us," Wily Savage guitarist Alon Burton said. "We know people will come out. We just don't know how many."

Daniel Martinez, 31, a dealer of Pokemon collectible cards from Pomona, California, was among the first to whirl and dance at the dusty makeshift festival grounds. He stayed warm beneath a wolf "spirit hood" and faux fur jacket.

"Here's a big open space for people to be," he said. "One person starts something and it infects everybody with positivity. Anything can happen if you give people a place to be."

Another gathering was planned Friday and Saturday at the Alien Research Center souvenir store in Hiko. Owner George Harris said his "Alien Basecamp" would focus on music, movies and talks about extraterrestrial lore.

Hiko and Rachel are a 45-minute drive apart on a state road dubbed Extraterrestrial Highway, and a two-hour drive from Las Vegas.

Michael Ian Borer, a University of Nevada, Las Vegas, sociologist who researches pop culture and paranormal activity, called the festivities a blend of interest in aliens, the supernatural, government conspiracies and the desire to know what is unknown.

"Area 51 is a place where normal, ordinary citizens can't go. When you tell people they can't do something, they just want to do it more," Borer said.