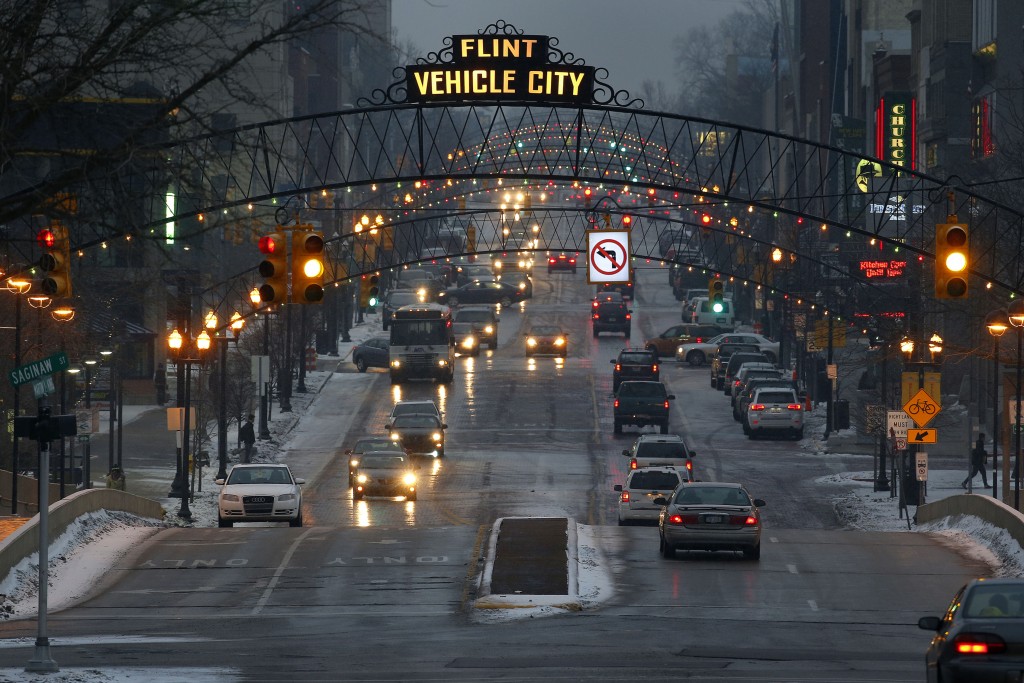 FLINT, Mich. (AP) — The birthplace of General Motors has been on an economic roller-coaster ride for more than a century as the automaker rose, crashed and retooled for changing markets. Now, the city of Flint is again steeling for economic impact amid a nationwide United Auto Workers' strike against the automaker.

Workers seeking job security and a bigger share of GM's profits have been surrounding the company's massive complex in Flint for days, marching and toting signs and U.S. flags at entrances.

"Vehicle City" — and many of the workers — have been here before.

James Schneider, who operates a laser-guided forklift truck at the GM plant, participated in a 54-day strike at a Flint plant in 1998 that forced a companywide shutdown. "Our motto then was: 'One day longer.' And that's what we're going to be. We're going to hold out one day longer," said Schneider, 43.

He described his hometown as "rough-and-tumble" and "a hard city."

"It's kind of left over from when we had a lot of GM plants here and you had to be tough or you got walked over," he said.

There is resolution but also apprehension in Flint, where an estimated 45% of the city's 100,000 residents live below the poverty line, according to 2016 census data.

Mayor Karen Weaver says she supports the striking workers, but she also doesn't want to see a long walkout.

"I don't know what this is going to mean for Flint ... but it needs to get resolved quickly," Weaver said.

She said she worries about the workers' livelihoods, as well as a tentative economic recovery that's included the arrival of an auto supplier plant on part of the site that once held GM's massive Buick City assembly center. The city is also hoping for another factory on a piece of the 390-acre plot on the city's north side.

"So we were looking ... for an expanded relationship and for things (with GM) to continue, and the strike happened," she said. "Because we have made that kind of progress it is a chance for us to focus on other things. That's what was starting to happen."

GM employs roughly 10,000 people in Flint and surrounding Genesee County, the majority of which are at truck, engine and metal plants clustered on the city's southwest side. That's actually up by a few thousand workers since the early 2000s, as more jobs have been added and investments made to the profitable truck-making business.

Still, it's a far cry from the manufacturing heyday of the 1950s and '60s, when GM boasted a workforce in Flint of upwards of 85,000. In later decades, jobs moved south or overseas, or just dried up. GM's dramatic job cuts and plant closings in Flint were chronicled in filmmaker and Flint-area native Michael Moore's 1989 film, "Roger and Me," a takedown of the company and its then-CEO, Roger Smith.

Residents suffered another kind of blow in 2014 and 2015, when lead from old pipes leached into drinking water due to a lack of corrosion-control treatment following a change in the water source when the financially strapped city was under state emergency management. The switch also has been linked to a deadly Legionnaires' disease outbreak.

Water quality has improved, and officials expect a citywide effort to replacing the aging pipes to be finished this year.

For the mayor, it was a sign of progress when GM reached a deal with the city last year to resume using the Flint-supplied water.

Weaver says when she asks residents "what recovery looks like," the reply is simple: "Jobs."

A strike lasting couple of weeks or less shouldn't deliver a major economic blow to the area or state, said Chris Douglas, an associate professor of economics at University of Michigan-Flint. But a longer walkout would curb needed tax revenue — the state has fewer jobs now than in 2000 — and hobble GM, which never regained market share from the shutdown two decades ago, he says.

"Everyone is weaker now, compared to 1998 — the company, the city and even the statewide economy," he said.

Joe Duplanty Jr., 56, works on the assembly line making a diesel engine. Duplanty, whose father was the president of a Flint UAW local decades ago, knows the history of GM and Flint — including how tough it can be on the city when the automaker scales back operations.

"When plants start leaving, the city's going to suffer," he said.