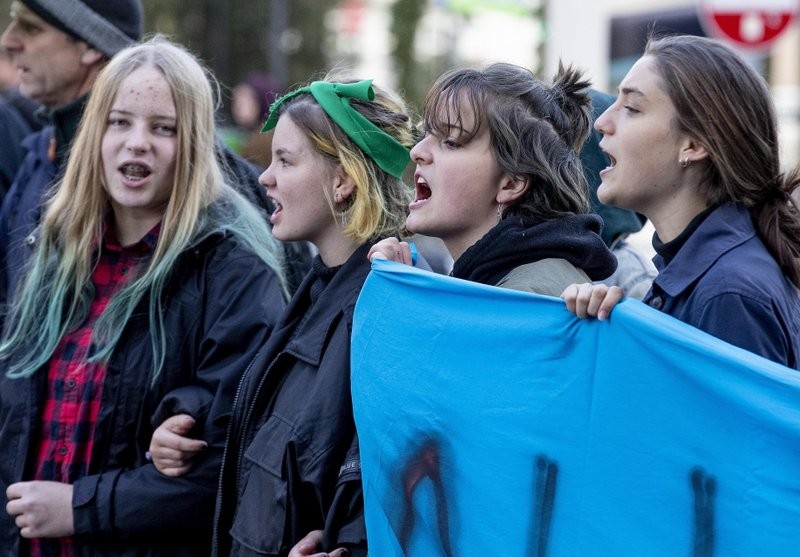 The Latest on the global climate protests being held in cities around the world (all times local):

Dozens of Filipino activists have marched in Manila to honor the memory of activists in the Philippines who were killed for defending the environment.

They marched to the offices of the Environment and Natural Resources Department, then staged a die-in protest on Friday while holding a banner saying ’Stop the killings. Defend the environment defenders now!”

The group Global Witness says the Philippines had the highest number of killings of environmental defenders of any country in 2018, with at least 30 murdered.

A separate rally organized by various student groups gathered in the afternoon at the state university. Hundreds participated as each of the students bunched together to hold up placards forming an image of the earth, with a big sign that said, “There is no Planet B.”

Police said several dozen activists blocked a road in the heart of Frankfurt, Germany’s financial capital, on Friday morning. In Berlin, protesters blocked a bridge across the river Spree.

Organizers say that more than 500 events are planned across Germany.

Under pressure from sustained protests over the past months, the government of Chancellor Angela Merkel is planning to announce a package of measures to reduce Germany’s greenhouse gas emissions later Friday.

Despite big investments in renewable energy that made up 46% of the country’s electricity production in the second quarter of 2019, Germany is on course to miss its emissions reduction targets for 2020 by a wide margin.

About 50 people in Hong Kong have found a different reason to protest in their city’s summer of pro-democracy demonstrations: climate change.

Carrying banners and posters, they are chanting “stop the pollution” as they march along the harbor front Friday under a blazing sun as part of a day of demonstrations taking place in cities around the world.

Organizer Dhanada Mishra, a visiting scholar at the Hong Kong University of Science and Technology, says that the younger generations will be seriously affected when the impacts of climate change are felt in the coming decade and beyond.

He says it is appropriate that young people should speak out and demand that their future is not jeopardized by government inaction.

Protester Nayla Ventura says it’s only fair to show her two children that it’s ok for them to fight for their future.

Dozens of students and environmental activists have gathered at a rally in India’s capital urging immediate action to combat climate change.

The demonstrators assembled Friday outside India’s Ministry of Housing and Urban Affairs in New Delhi.

They chanted slogans like “We want climate action” and “I want to breathe clean” as part of a day of worldwide demonstrations ahead of a U.N. climate summit in New York.

They also carried banners with some displaying messages like “There is no earth B” and “Eco, not ego!”

Aman Sharma, a 16-year-old protester, said: “We need to reclaim our constitutional right to clean air and water.”

Police watched the demonstrators at a distance.

Many other such gatherings were planned across cities in India.

Hundreds of people have marched in the streets of the Thai capital to demand the government take measures to deal with the climate change crisis.

An organizer of the protest says about 250 people, mostly children with their parents, took part in Friday’s protest. Many were Westerners.

The organizer, 21-year-old Nanticha Ocharoenchai, says the demonstrators stopped at the Ministry of Natural Resources and Environment to submit an open letter demanding the government declare a climate emergency, ban coal energy by 2025 and completely replace fossil fuel energy with renewable energy by 2040.

The protesters staged a “die-in” outside the ministry to dramatize their concerns, lying down on the pavement with many clutching home-made signs with slogans such as “Clean air is our right.”

Similar protests are being held in cities around the world.

Organizers estimate more than 300,000 protesters have taken to Australian streets in climate action rallies in what would be the largest demonstrations the country has seen since the Iraq war.

School Strike 4 Climate says in a statement 265,000 protesters turned out at demonstrations in seven cities alone. The largest crowd was an estimated 100,000 in Melbourne and 80,000 in Sydney.

Most police services declined to release their own crowd estimates.

Australian police have a reputation for underestimating by half crowd number at protests.

Protests were staged in 110 towns and cities across Australia, a country with a population of 25 million.

Similar rallies are planned in cities around the globe ahead of a U.N. climate summit in New York..

Australia’s acting prime minister has described ongoing climate rallies as “just a disruption” that should have been held on a weekend to avoid inconveniencing communities.

Thousands of protesters were gathering at more than 100 rallies across Australia on Friday calling for action to guard against climate change. Similar rallies were planned for around the world.

McCormack is filling in Prime Minister Scott Morrison, who is in the United States for a state dinner with President Donald Trump.

Thousands of protesters are gathering at rallies around Australia as a day of worldwide demonstrations begins ahead of a U.N. climate summit in New York.

Some of the first rallies in what is being billed as a “global climate strike” started Friday in Australia’s largest city, Sydney, and the national capital, Canberra.

Australian demonstrators are calling for their nation, which is the world’s largest exporter of coal and liquid natural gas, to take more drastic action to reduce greenhouse gas emissions.

The Global Strike 4 Climate said protests will be staged in 110 towns and cities across Australia on Friday, with organizers demanding government and business commit to a target of net zero carbon emissions by 2030.

Similar rallies are planned in cities around the globe.