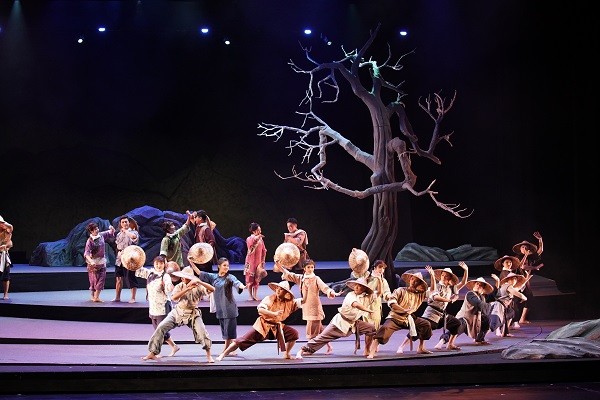 Rom Shing Hakka Opera Troupe is renowned for its innovative approach to a once dying genre. Blending traditional and contemporary styles, its performances have proven a hit with audiences both at home and abroad. But the journey to fame began in humble fashion.

Founded in 1988 by Cheng Rom-shing in northern Taiwan’s Miaoli County, the troupe traces back over 70 years to when its predecessor was started by Cheng’s grandmother, who was a performer herself. “Hakka opera was completely ignored at that time and often not even recognized as a separate entity,” Cheng said. “So I felt driven to breathe new life into it.”

Traditional Hakka opera, so named because of its origin in the Hakka ethnic group, involves only three characters—a tea-selling young man, his wife and his sister—improvising together onstage. To freshen up the genre and reach out to a broader audience, Cheng has worked on two to three new plays annually that can be added to the troupe’s repertoire.

Rom Shing’s most recent play “Hold on, Love!” is inspired by “As You Like It,” William Shakespeare’s iconic comedy, and is a perfect example of the troupe’s stylings. Performed in the Hakka language and accompanied by musicians playing classical Chinese instruments, the new production is scheduled to premiere Oct. 5 at the National Theater in Taipei.

As the most well-known Hakka opera group in Taiwan, Rom Shing has garnered a succession of accolades, including being nominated for Best Troupe at the Golden Melody Awards for Traditional Arts and Music in four of the past five years. This fame is reflected in the numerous international performances the group has given in countries such as Austria, Brazil and the U.S.

Cheng, who founded the Hakka Opera School in Miaoli and became the first president of the National Taiwan College of Performing Arts in Taipei, sees Rom Shing as more than a performance group. He considers it key to cultivating the next generation of young actors and musicians. “Performers tend to have relatively short careers,” he said. “If the genre is to continue and prosper, we need to proactively seek out new talent to carry on the torch.”