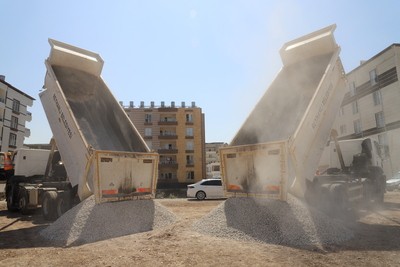 TAIPEI (CNA) — A groundbreaking ceremony was held for a Taiwan-funded refuge center in Turkey near the border with war-torn Syria Thursday.

At the ceremony to mark the beginning of work on the Reyhanli Centre for World Citizens, Velalettin Guvenc, head of the Turkish parliament's interior committee expressed gratitude to Taiwan, saying although Taiwan is about 8,000 kilometers away and most Taiwanese are of a different religious persuasion to most Turks, they share the same humanitarian values.

The Turkish lawmaker said with the provision of financial aid to build the refugee center in Reyhanli, Hatay Province, southeastern Turkey, Taiwan was showing that Turkey does not have to deal with the refugee crisis on its border alone.

Since Syria plunged into civil war in 2011, almost 120,000 refugees from the country have fled to Reyhanli. Moreover, as the Turkish city has a population of about 100,000, the density of refugees to the local population is highest among all the Turkish cities along the border with Syria.

According to Reyhanli Mayor Mehmet Hacioglu, the refugee center has been planned for years and construction is scheduled to be completed by the end of this year.

Hacioglu said the project is expected to create jobs for the city, boost prosperity as well as improve tourism business.

The mayor said he believes the project will help increase the appeal of Reyhanli.

The Taiwan government has provided all of the funding to build the refugee center, but the financial terms were not immediately available.

The project was pushed for by Taiwan's representative to Turkey, Yaser Cheng (鄭泰祥) and former Reyhanli Mayor Huseyin Sanverdi three years ago. The center is being built on a 2,000 square meter plot of land and when completed will have 52 multi-purpose rooms for the use of Syrian refugees, including for art creation, art displays, reading and learning.

Sanverdi, now a lawmaker from Hatay, said Taiwan, which has already established a school for Syrian refugees in Turkey, has been generous in providing financial aid and the country has become a role model in terms of international humanitarian assistance.

Addressing the ceremony, Cheng said Taiwan has worked closely with the Turkish government in helping Syrian refugees in recent years not only in Hatay but also in Sanliurfa and Gaziantep.

In addition to the Taiwan government, Cheng said the Buddhist Compassion Relief Tzu Chi Foundation, a charity group from Taiwan, has also made its presence felt in Istanbul, providing health and education assistance.