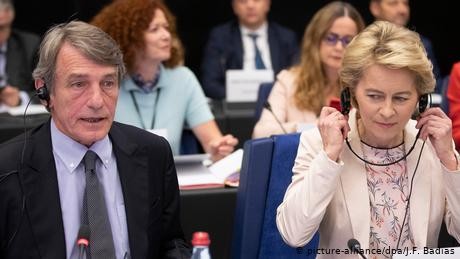 The Socialists & Democrats group (S&D) wrote on Thursday that the intended portfolio for "Protecting the European Way of Life" smacked of xenophobia and "wrongly linked" migration and security.

Tapped for the role is Margaritis Schinas of Greece, with parliament due to vote on von der Leyen's full package on 23 October.

On Thursday, the former German cabinet minister emerged from talks with Strasbourg parliamentary group leaders — chaired by the parliament's president David Sassoli (pictured above with von der Leyen) — describing the session as "very constructive and positive” despite the warning.

"We have a serious problem with linking the 'Protection of the European Way of Life' with migration, and we won't accept the title as it is," said Socialist & Democrat leader Iratxe Garcia Perez whose group sent the letter to von der Leyen.

The Greens' co-leader Ska Keller said von der Leyen "did not propose changes, but said she was open to debate.”

Last Monday, von der Leyen acknowledged that "for some” the wording was a "loaded, politicized term.”

Members of the European Parliament (MEPs) start in early October their vetting of nominees for the influential 27-member commission.

Greece's Schinas is nominated to become one of several commission vice presidents. His mandate would cover education, integration, migration and cross-border security.

Both Schinas and von der Leyen belong to parliament's conservative bloc, the European People's Party, which is the largest bloc in the parliament by a narrow nine-seat margin.